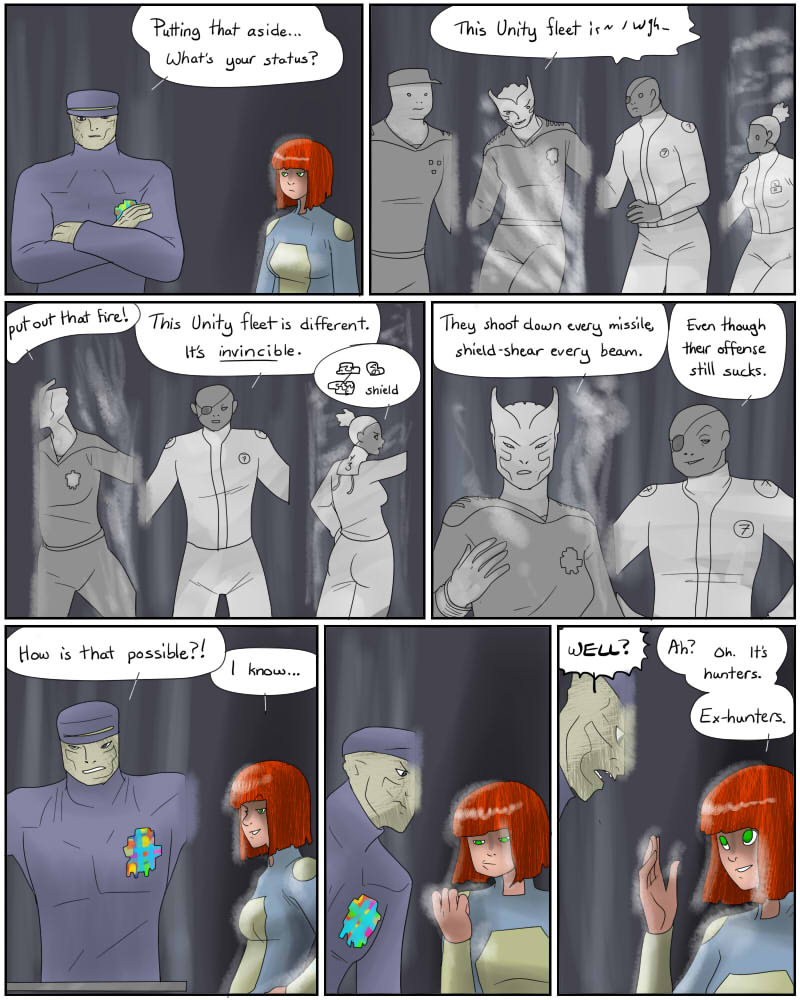 Now it's time for an info dump!

Hey, who'd have thought, people who can see the future actually make for a good commodity on war spaceships.

Yeah, basically, SF would be screwed if Iri wasn't around, since Unity seized all other hunters.
Sheela 31st Jul 2013, 10:21 PM
edit delete reply

Aw, somes times a bit of text is lovely to have. :)

So the hunters are still good defensively, because of their powers, but because the slavemaster is directing them, their offensive skills aren't being used and his own are a bit .. lackluster ?
Frosty The Pyro (Guest) 31st Jul 2013, 10:29 PM
edit delete reply
Everything has hard limits, if unitys offense has traditionaly been crap, it is likely due to technological limits of the hardware. If your missiles are slow and easy to shoot down, being able to see the future wont change that.

Well, AFAIK their cyberware is better than SF's is ... and I suspect their ships are quite good too ... heck, they might even have the edge in technology ... but if the head honcho .. ie. the Slave Master is trying to control all of them directly, then their offensive effort relies entire on his ability.

so if he isn't very good at it, his entire fleet won't be good at it either.

Unity is actually behind the SF in general - about three decades or so. But SF doesn't sponsor any research into cybernetics, so SF cybernetics is way behind the rest of their tech.
Sheela 1st Aug 2013, 12:22 AM
edit delete reply

Hrm ... considering they probably have several hundred years of technological development behind them, 3 decades may not be as big a difference as one might think.

Least it ain't an entire page of text, followed with another full page of text. I mean it's suppose to be a web-COMIC, not a web novel. Your text page comes with pretty pictures and a bit of light humor.
view 31st Jul 2013, 11:20 PM
edit delete reply

That's the most common reason I stop reading web comics, so I try to avoid it myself.
Bellar 1st Aug 2013, 12:20 AM
edit delete reply

Text is an important pacing item visually though. I'm more likely to be able to appreciate a comic's art if there's text to keep my eye on the page.
Bellar 1st Aug 2013, 12:18 AM
edit delete reply

I wonder if Iri is trying to act cooler now that she knows movies are being made of her exploits.
highlander55 1st Aug 2013, 12:53 AM
edit delete reply

Actually View, I see all the text as all of them talking at the same time like any group trying to get their point across.

Ah, welcome Mr Monocle ... always nice to have another gentleman among us. :)

Honestly, half the reason that rules lawyering comes up is wishy-washy GMs that do stuff not for rule of cool but just because. While that can work with some things (See aforementioned rule of cool), not having a stable base to understand how the world works ("every time you cast a spell, roll a d20. <list of random shit that occurs>" is fine because it's a form to follow, even if the exact effect is totally random & made up on the spot (ex., roll the d20, and the DM makes shit up, gauging the effect to the roll). Making up random shit that should be known beforehand that just throws the players for a loop because it was poorly thought out, on the other hand, like suddenly a portal to a demon world opening up without warning in a no magic world campaign without rhyme, reason, or even local history for such an event occuring, just 'because'... that sorta thing) means that you can't even begin toimmerse yourself in the game. And while, okay, I'll admit that can work for a fluff campaign where the entire point is to be stupid and silly and just goof around, for a serious roleplay, it's just... geh.

Iri would still make a great DM though, since she could easily handle those rules problems by ensuring anything she wants to fudge around with the basic mechanics of the game are known ahead of time, nipping any need for rules-lawyering in the bud.
Guest (Guest) 1st Aug 2013, 9:11 PM
edit delete reply
I get the strangest feeling that half the point of the "drop warp now" affair was to get the leader of her fleet to take her seriously. He certainly seems to dislike her and I can't help imagine she's trying to force him to get over it.
Post a Comment