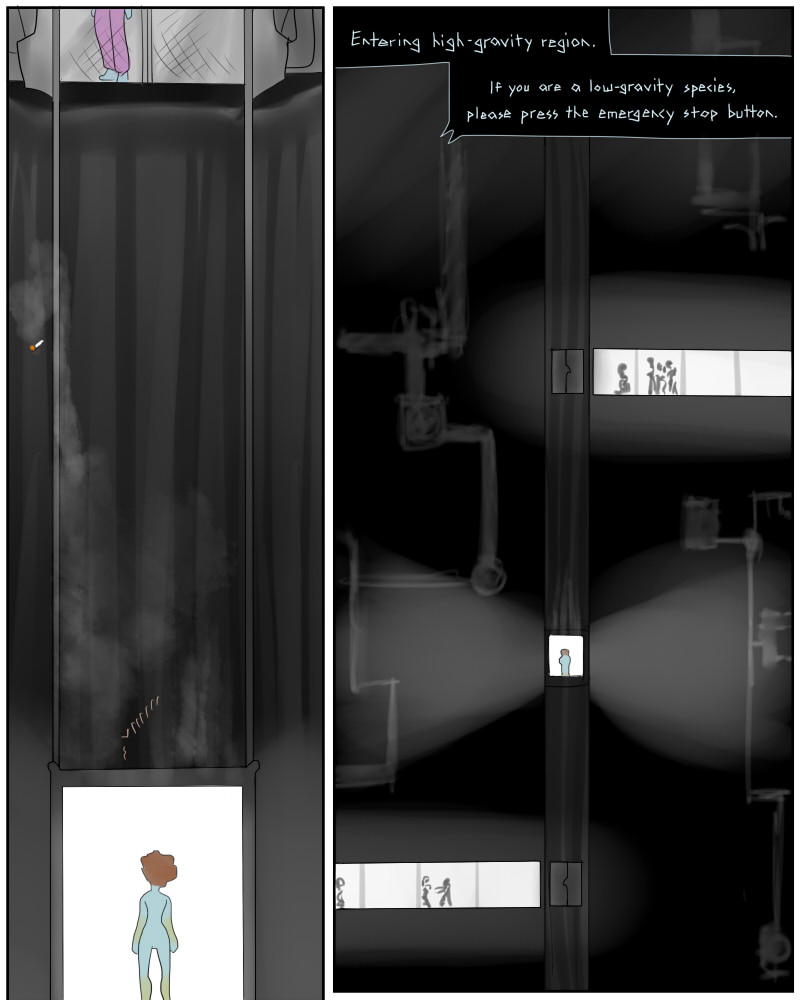 Seems like an appropriate lull in action to ask a question. Did Ayata decide on a Species name for her people and, if so, what did she decide on?
view 23rd Oct 2012, 9:17 PM
edit delete reply

Elevator go down - hair go up.

WanderingSpark (Guest) 24th Oct 2012, 2:35 AM
edit delete reply
Crap. I caught up. After working my way up to here from the beginning of Never mind the gap I'm not sure I can handle an archive withdrawal this sudden. Have you written any other comics I can use to nurse my way down to six strips a week?
Also I really like the falling white stick detail, though I have to wonder how it managed to get outside the car.
pkrankow 24th Oct 2012, 3:42 AM
edit delete reply

No, I don't have any other comics. There are plenty of good comics out there, though.
Seafog (Guest) 24th Oct 2012, 3:50 AM
edit delete reply
Huh, I didn't notice the cancer stick, or smoke, till you mentioned it.
As for other comics, View has done some. In the SFW category, he did Crater High, should be easy to find by title.
In the NSFW category, he has done a few shorter pieces, all rather naughty. Don't want to point specifically, so if you are interested, look for 'Cheer' by 'Forview'.
Twiser (Guest) 24th Oct 2012, 5:20 AM
edit delete reply
Didn't know about View's Crater High series. Reading it now. Thanks for the tip!
VlRGlL 24th Oct 2012, 8:12 AM
edit delete reply

Yay boxer hockey! His off-story comics are great too. Questionable Content always seems to be one of those safe bets, provided you're okay with simple, on the fly story. It's got multiple years running so it might be the fix you're looking for.

First time I found Crater High I was like "man, everyone be blushin".

So I realized. view's carved out a nice little niche in the webcomic ecosystem. There's a real happy medium between the length of NMtG and the story's content. Most (most) of the comics I've found that have a complete, enclosed story are generally in the "short story" category length-wise, while the long running comics everyone's familiar with are more meandering and open-ended for the sake of continuity, which doesn't make them necessarily worse story-wise, but you don't ever get any sort of conclusion or restitution unless the artist gets bored / incarcerated and the thing gets quickly and haphazardly thrown closed. NMtG had enough time to flesh out the large majority of important things, with its hyperactive comment section filling in gaps, but the plot was clearly moving towards some ending. Like any compelling story most people didn't want to see it end (me included), but the final resolution gave people a good sense of closure (for the particular story arc that is, cause it sure as hell opened a shitload of worm cans), and I think the general consensus was that the actual closing plot was positively received. In the short span where we knew NMtG was wrapping up and Space Pulp wasn't chugging along yet, there was definitely that itch people get when they want the next installment of whatever but don't know exactly when it's happening. I thought that was worth noting, as I really don't see it in the web comic community often.

You're an author, view.

Take that as a compliment or insult, idk which.

On a different topic, what constitutes "high-gravity"? I'm guessing by Ayata's build that her planet may be "lower" gravity, but what about the poison? Maybe you go all Barsoom on us and make poison monkeys dense-muscled demigods, but I doubt it would be that easy.
cattservant 24th Oct 2012, 8:20 AM
edit delete reply

In a world of millions, even billions, of readers, any niche will be a small one until it reaches into the hundreds of thousands .. and even then, it wouldn't make a big splash in the overall world wide web population.
Even so, I'm happy to have stumbled across Views comics, because they have such compelling and lifelike characters in them. :)

And yes, the first one I read was "Cheers" which despite being porny, still have interesting characters.

I liked it so much that I went out and googled for the artist to see if he/she had made more stuff.
And .. well, you know the answer to that.
Sheela 24th Oct 2012, 9:34 PM
edit delete reply

I wonder ... is there elevator music in space too
LordNicodareus (Guest) 25th Oct 2012, 6:46 AM
edit delete reply
In space, no one can hear you tap your foot to "Girl from Ipanema Gamma"
gh0st (Guest) 26th Feb 2015, 4:08 AM
edit delete reply
is iridium lake inspired at all by river song from doctor who?
Post a Comment