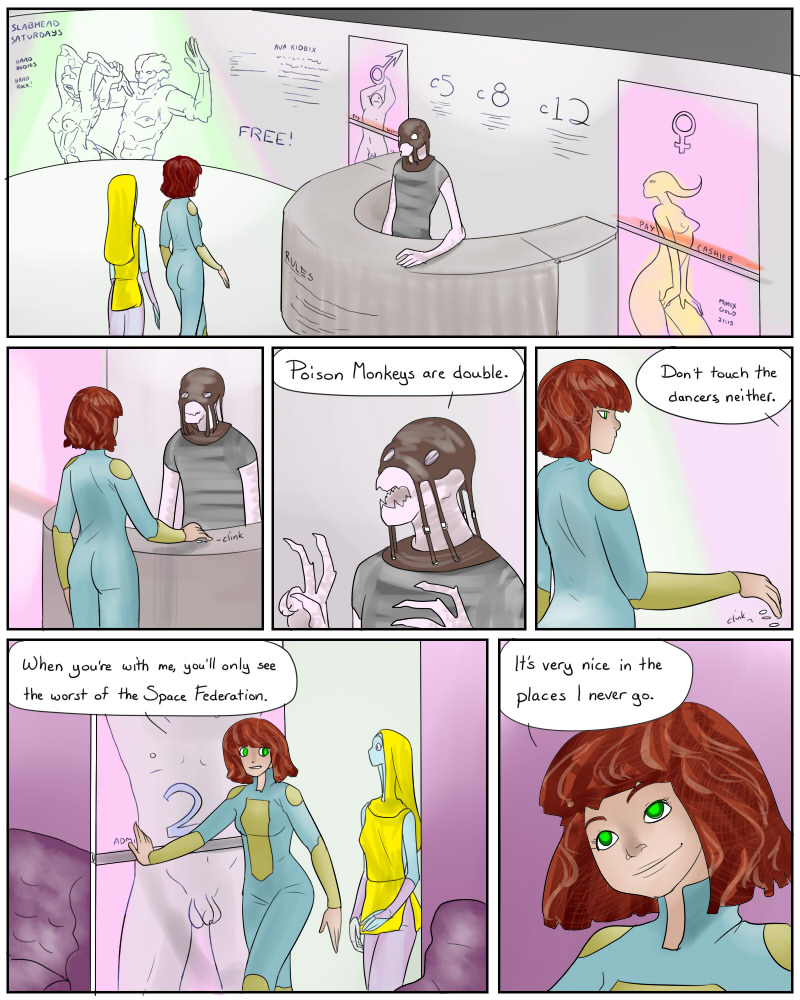 Sorry, there almost certainly won't be a comic tomorrow. I'll have one on Saturday to make up for it.
User comments:
cattservant 18th Oct 2012, 11:04 PM
edit delete reply

If Iri only goes to the ugly places, doesn't she get a bit bored with it after a while ?

Well, she goes where the trouble is. And if there's no trouble, the whole place goes to hell anyway the instant she gets there.
cattservant 18th Oct 2012, 11:57 PM
edit delete reply

I'm not sure how I feel about today's hair right now. It reminds me of when digital artists use a symmetrical repetitious pattern behind a very asymmetrical object like flowing cloth. Sometimes I love it, sometimes I strongly dislike it.

On further consideration, I really do like how the last panel's hair has implied shape around the bangs, and an overall darker appearance on the right inside, as would be expected. *completely honest thumbs up*

I'm also now curious as to what a slabhead (I'm assuming that's the common name for the two people in the upper left, and am way too tired to sift through the previous pages) penis looks like, and at the same time, I feel like I really don't want to know.
ravenor78 19th Oct 2012, 3:51 PM
edit delete reply

Ah xenophobes, found everywhere in the universe that we live in, even our sci-fi webcomics that humans don't even exist in.
elfolampo 19th Oct 2012, 6:29 PM
edit delete reply

If poison monkeys live up to their reputation, it may be more insurance than just good business practice.
view 19th Oct 2012, 11:22 PM
edit delete reply

I was wondering whether anyone would comment on it. I wasn't sure if I was being obvious enough: Poison Monkeys are not a popular species.
SpaceMonkey 20th Oct 2012, 5:13 AM
edit delete reply

I'd have to read back through to be sure but I don't think it's been explicitly stated that anyone has a real problem with the species. You write extensively in the comments about it so it all flows clearly from that perspective. I think without that though it might be easy to interpret a lot of people's misgivings about Iri as being personal rather than directed at her species.

But yeah, I interpreted that as being general speciesism on this page.
elfolampo 20th Oct 2012, 7:09 AM
edit delete reply

Well, Iri defines her whole species as a blight. And, to the very least, she seems very happy about it. I wonder if that's shared by most space-faring monkeys, or there's a good fringe that sees Iri and those like her as 'those Poison Monkeys that ruin the good name of our species in the universe'.

Then again, it's a species that chose to call itself Poison Monkeys.
elfolampo 20th Oct 2012, 7:20 AM
edit delete reply

Actually, if there's anything in this comic that stroke me as odd, was the "Slabhead Saturdays" writing on the wall. There were a number of plausible reasons for which Poison Monkeys paid double: damage insurance, them being the scourge of the universe, past episodes of violence and/or getting too 'friendly' with the dancers, the dancers in general being uneasy around them, other customers going "there's Poison Monkeys here, let's go to another place" and thus losing sales, etc.etc.etc..
While I wondered about Saturday. The whole concept of Saturday we know of comes from the earth week, and it's even named after a god in the Roman Pantheon. Especially considering that planets, and more so artificial satellites of planets like this one seems to be, probably run on their own day/night schedule, at which value should we take this "Saturday"? As "translated from space language word-play about space race and space name for a random day of the week that would sound a bit alike the name of that race, which works more or less similarly to Slabhead Saturdays", or is that more or less accurate?
ravenor78 20th Oct 2012, 12:35 PM
edit delete reply

I believe what he's trying to communicate is that "realistically" ie. in a universe that doesn't do the whole humanoid bipedal pretty aliens - it's unlikely that there would be any similarity or compatability in terms of their genitals.

Of course the fact you've already put in the comic that they're all descendants of a past space-faring race means that it's actually very reasonable that all these aliens have similar biologies. This is really a great way to sidestep the need to explain why all the aliens are so compatible (mostly breath the same stuff, communicate similarly, similar psychologies etc).
Meh.Aloe (Guest) 20th Oct 2012, 9:40 AM
edit delete reply
It worked for Star Trek. :P
cattservant 20th Oct 2012, 10:06 AM
edit delete reply

As it'll become clear soon, all races are descended from the same core gene pool.