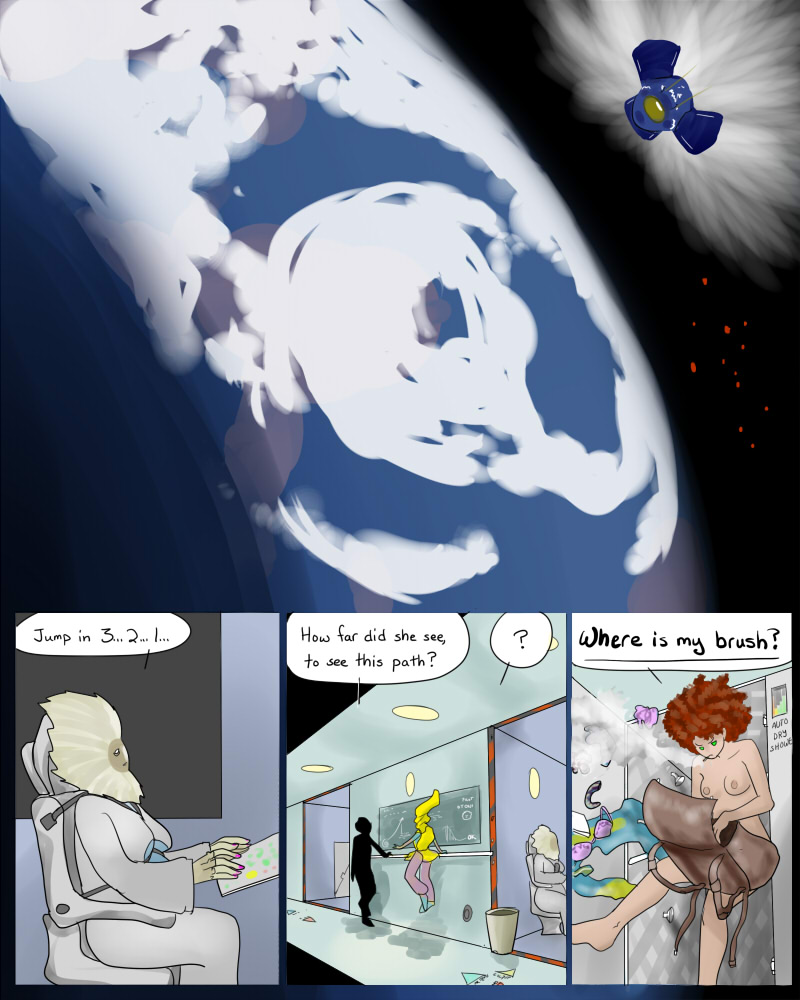 Distracted by color?
When you get too close to something it gets hard to see...
Sebine 5th Oct 2012, 8:34 AM
edit delete reply

I was JUST listening to a song that is eerily similar to that line..

"You know the closer you get to something
The tougher it is to see it
And I'll never take it for granted
Lets go"
Centcomm 4th Oct 2012, 9:16 PM
edit delete reply

2 comics ago, someone mentioned telepathy and view went crazy, so maybe she can't see the hairbrush because it has no telepathic imprint ?


If her powers are sort of telepathic in nature, she would be able to foresee events to some degree, simply by knowing what people are thinking of doing.
However, that would only let her know the immediate future, but if she could also be able to either read future thoughts, or simply extrapolate on probable thoughts to come. This would have to be second nature to her, or it'd bog her down right quick unless she had, or connected to, a gigantic brain/conciousness.

Alternately, you could have multiple psyche's from sentient creatures "combine" to make a sort of telepathic map of the area, and if you were good enough to read it, you would also be able to see where people would not be .. ie, shadows of the "mental map" of a nearby area.
If you went to those "shadow" spots all the time, that would either make you the best thief/infiltrator in the world, or very very lonely. In either case, it could be open for exploitation by someone like Iri.

The hairbrush would still be invisible to such senses though, as would thorny bushes.
cattservant 5th Oct 2012, 10:13 AM
edit delete reply

I remember an art class project that we had to paint flowers with a rather large flat brush. We were not allowed to use line drawing on the "canvass" to develop composition or structure.

I made an unholy mess of it.

Okay, all I know is that if jumping has a noticeable physical effect on passengers, as it does every other sci-fi ever, there is potential comedy with Iri in the next page or two. Not to say there isn't comedy here. Also cute nudity. Cudity.
Big Nemo 5th Oct 2012, 1:05 PM
edit delete reply

No FTL physics expert here, but if the jump drive is something like an Alcubierre warp drive, then there should be no perceivable acceleration (basically the ship stands still inside a bubble of space-time that "appears to move" faster than light).

There's a vibration when the ship jumps, but it's actually not something that people in midair would notice. Only people strapped to a chair are really affected by the force of it.

The last panel ties this page up perfectly. Not to mention it being funny as hell that she is floating there naked looking for a hairbrush as if it were the most important thing in the universe.
view 5th Oct 2012, 10:44 PM
edit delete reply