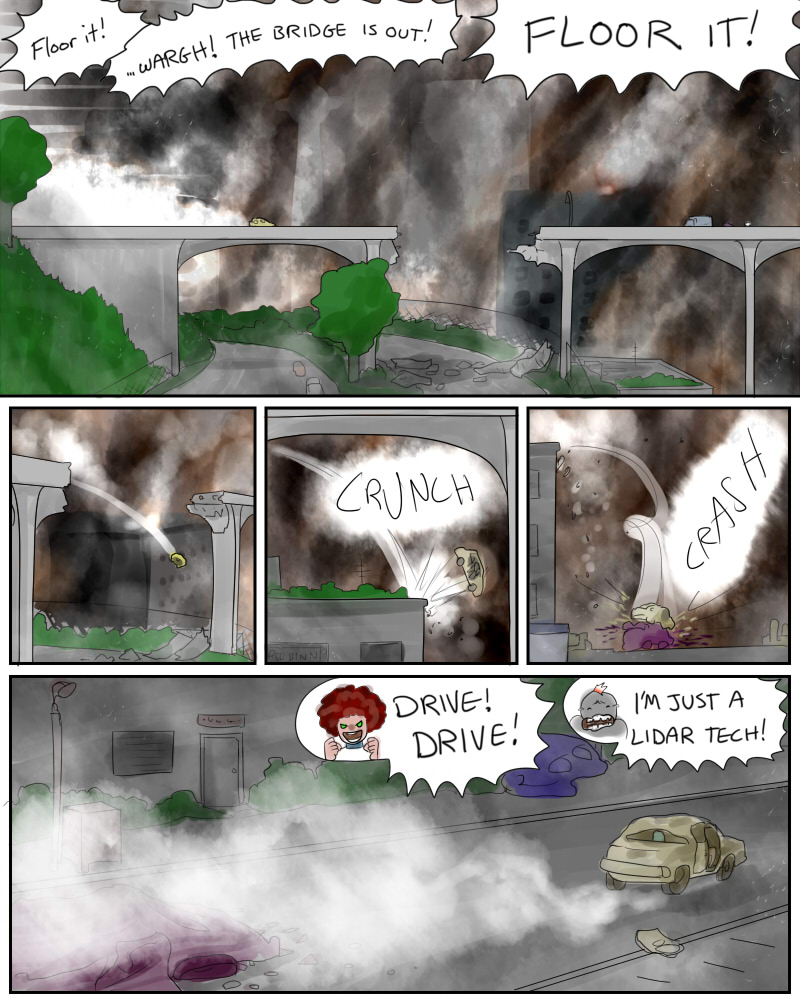 Hahaha - this is too funny - ok her ability makes me understand her attatude a LOT better. she really DOES know if shes gonna get herself killed :D
view 25th Sep 2012, 11:50 PM
edit delete reply

Its coming accross perfectly - I actually didnt realize till this segment :D JUST how much of a pre-cog she is *claps* reading back her actions makea LOT of sense ...
Razingthebar (Guest) 26th Sep 2012, 3:30 AM
edit delete reply
I think I remember saying something about how Iri's plan is insane but if she's this good at pre-cog it's almost justified. Not actually mind you but close.
Undead H3r3tic 26th Sep 2012, 12:25 AM
edit delete reply

It's a bad day for bridges, but that's one helluva sturdy car!

Basically, her sight reminds me a bit of Mirai Nikki (a manga where a number of characters have a diary that tell them the future in limited way, each diary using a different method), with the difference that she actually sees a great number of different potential futures. Basically, with this kind of power and her general abilities, she's only screwed in two cases: 1)if every possibility she's seeing leads to her death(a dead end/walking dead situation, to use old adventure games), which she's been avoiding by avoiding choices that would lead to it, so far, or 2) when facing another one with psychic powers, since her ability doesn't work too well when they're involved, probably for two reasons: reason A) they might see into the future themselves, generating chaos(likely the present situation, if the hulking guy is telling the guys where to shoot the missiles, she can only start seeing where they hit and give direction on how to avoid them AFTER they've been shot), reason B) they might specialize in screening like the one in the flashback, just preventing them from seeing her.

That's why she considered herself relatively safe with the pirate king, since he didn't have anyone able to mess up her predictions. She also had the advantage of not wanting to attack him, just avoid him/use him as a diversion, which gives her more freedom of action.
view 26th Sep 2012, 12:32 PM
edit delete reply

Loved Mirai Nikki until like the last quarter of it...