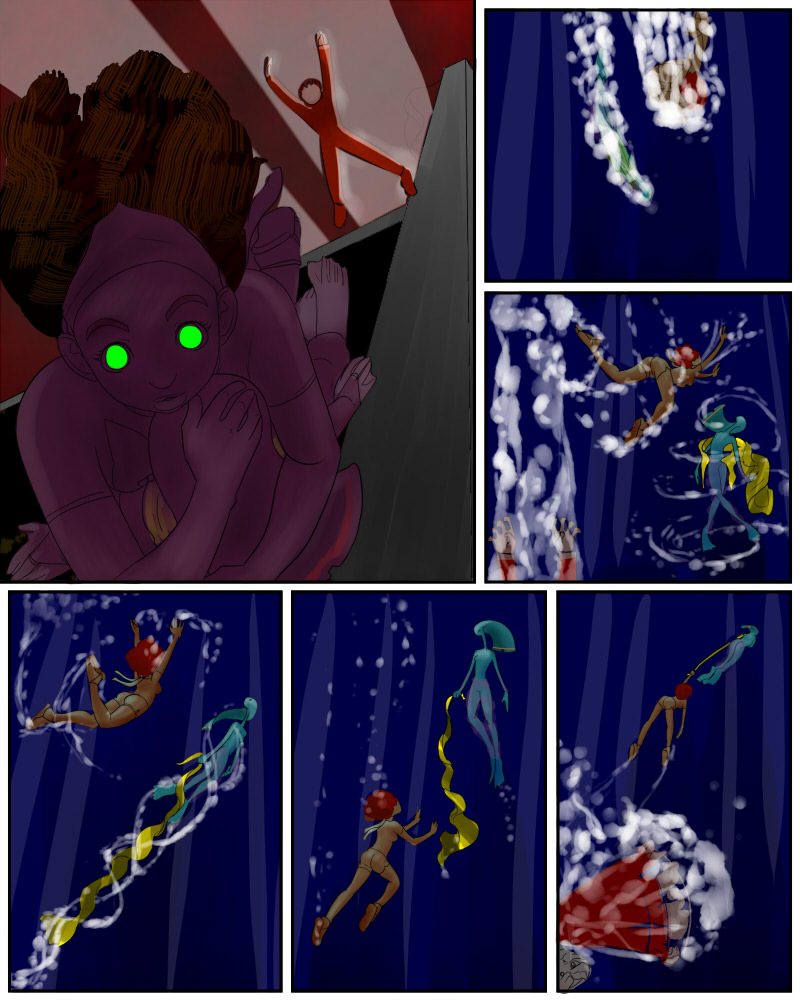 Out of the frying pan and into the "carbon-sequestering phytoplankton" soup!

I wonder if Ms. Lake doesn't make Commander Kax a little crazy(ier) due to past encounters?*
He had to know he couldn't swim!

This is a pretty entertaining comic so far, but I have to agree with one of your prior statements that effective pacing is sometimes a bit of a problem. Admittedly, some of the reading I do hits me with a "Whuh? What happened? Did I miss a page?"
Still, you have an interesting comic here, and some great jokes. Keep up the good work.
view 18th Sep 2012, 12:08 AM
edit delete reply

It's important to know if it's so disjointed you can't tell what's going on.
Meh.Aloe (Guest) 18th Sep 2012, 12:17 AM
edit delete reply
To butt in, I also sometimes feel it's a bit disjointed. Like your previous comic, it leaves some of the mental leg-work up to the reader, I feel, which may feel less natural in a pulp-ey comic rather than in a deeper work like NMTG. Like, there are certain moments where it's not clear why the characters are doing something. Much later, a page that hints at the answer (still without making it explicit) is put up...

... BUT! But. But, I think this feeling is most obvious when one reads the comic page by page as it is being published; re-reading chunks of the comic all at once has helped me so far. What feels like a very long gap between an event and its explanation during the first read-through doesn't seem long at all once you re-read a part of the comic as a "finished work." And it is still nice to read a work that does not spoon-feed the reader information!

Specific examples of when it felt disjointed would be helpful. I do write with the intention that it'll be read in big chunks, but if I can make it work both ways, I will.
Meh.Aloe (Guest) 18th Sep 2012, 1:58 AM
edit delete reply
The moment that got me was when Iridium and Ayata were leaving Aya's planet, sneaking onto that Unity shuttle. I couldn't figure out why they were doing that, since the last time we saw them, it looked like they were about to plan an uprising against Unity on the planet. Later on we learn that Iridium is a member of some larger organization of (presumed) do-gooders, and later still Floating Skull of Doom said that Aya getting to the Space Federation would be bad. From this we can figure out that the reason Iri and Aya were sneaking off-planet was to tell this Space Federation of the plight of Aya's people, and get their help, and it's important to have Aya along as an eye-witness or representative of her people or something like that.

But there was a bunch of time before we got these hints where the character's actions really confused me.

I also didn't figure out at first that Commander Kax' ship was hunting Iri, and so was confused when it first arrived -- was Iridium wrong about the fleet headed for Aya's planet being delayed?

So yeah, basically, some moments are confusing at first, but as we learn more about the story, they start to fall into place.

Thing is, that sense of "falling into place" is an enjoyable part of the reading experience, so I would miss it if it were gone. Also, if this is just your natural style of writing, then I want to read the story in authentic view-style!
view 18th Sep 2012, 2:16 AM
edit delete reply

Yeah, I thought that might have been kind of slapdash. I really wanted to avoid a lot of "captains chatting" situations, so I took some shortcuts.

The fleet was delayed - but only for a little while. Long enough that the picket fleet on duty finally had to leave even though their replacement hadn't arrived.

That I definitely should have made clearer.
Visioneer 18th Sep 2012, 4:13 AM
edit delete reply

One example is perhaps the most recent two pages. Taking a look at the "air car" it is shown at an incredible height, followed by by the lights highlighting the two characters on the ground, I had initially not realized that the "air car" had landed on the bridge, but the character was kinda hanging out of it while someone was else was piloting it, and it was still in the air.

Upon further review, the panel where (I'm sorry, I can't remember Mr. Not-Say-All-That-Much's name) is out of the vehicle, I had realized that it landed. This is one good spot where splitting a frame into to would have been an effective vehicle for story telling, perhaps with one half panel of the vehicle landing, or hovering close to the ground, the second panel being either a boot hitting solid ground, or Captain Bad-@$$ stepping out of the vehicle as you have him.
This lack of flow provided a bit of additional confusion on the next page, where Iri dives into the water with Aya and the red guy is floating in the air behind them. Initially, I thought this was one of the bystanders that had gathered around the car when the trio first arrived at this location, and it wasn't until later panels that my mind put it together that it was Major Water-rock.
Simple hints, changing perspectives, adding additional panels (text isn't always necessary) or subtracting the slower ones will result in a more cohesive reading experience.
"Mental leg-work" is great, in the right case and applications, but for simple panel to panel flow, there are "fundamentals" to creating an effective flow of a page.
Being a comic maker, I'm certain you've read Scott McLeod's Making Comics, and if you haven't, I suggest you check it out. It's less about the instruction of making a comic, and more about the theory behind it.
view 18th Sep 2012, 1:50 PM
edit delete reply

Hmmm, I'll be more careful in the future.

FYI, Understanding Comics and Making Comics are both books which pretty clearly tell you to leave stuff out. So I don't know that I would recommend them for this kind of issue.
Visioneer 18th Sep 2012, 6:49 PM
edit delete reply

Indeed, they do (And I meant Understanding Comics, that was my bad :P ) but only where it is effective to do so. There is a lot of theory about effective page flow, and sometimes what you don't show is just as important as what you do. However, that is more in terms of pacing a page too slowly (unless for dramatic effect). Your case, for me, seems to be the opposite, as you seem to be pacing the flow of the pages too quickly, causing things to become jumbled and, at some times, difficult to read. Don't get me wrong, I love your comic, it's very entertaining, but having to re-read a couple pages to make sure I understand what's going on is a bit frustrating at times.
Still, regardless of pacing, you have one of the better comics on Comic Fury (imho) so please keep up the great work.
view 18th Sep 2012, 7:00 PM
edit delete reply

I'm not taking it hard, it's valuable. It's just that I think this kind of commentary is more valuable than rereading books that led you to do this stuff in the first place.

Interestingly, I had no issue with continuety regarding the Air car. But then, your mileage may vary.

Personally, I've sometimes read webcomics in reverse and still gotten coherent stories out of them. I dunno if that is anything special or not.

Obviously, a few mistakes will slip trough when you produce a whole page a day as a solo effort, it's gonna happen. so I wouldn't worry too much about it, if I was you.
Nightsky 17th Sep 2012, 11:41 PM
edit delete reply

White Light to you as well! For Well.
Meh.Aloe (Guest) 18th Sep 2012, 12:11 AM
edit delete reply
Oh no! Please feel better soon. :( Drink lots of tea! Try rinsing your nose out with salt water! That last bit helps wonderfully for upper-respiratory-tract infections, *and* fits the content of today's strip!

Today's strip has some very beautiful imagery. It makes me want to see Space Pulp as a ballet.
Centcomm 18th Sep 2012, 2:27 AM
edit delete reply

Hope you feel better view. Virtual hugs and love to you. Take it easy for your sake, we sure wouldn't blame you if you took a hiatus. You really haven't for almost a year so just don't make yourself any sicker!
view 18th Sep 2012, 7:01 PM
edit delete reply

I really want to draw the next page, but I'm quite sick. I'm going to sleep for a few hundred hours. Maybe I'll give you all a page after that.
Meh.Aloe (Guest) 18th Sep 2012, 11:06 PM
edit delete reply
Sleep is wonderful! May your fever dreams bring you much inspiration! And then become less fever-ey. And then you get better. Yay!
SpaceMonkey 18th Sep 2012, 7:53 PM
edit delete reply

My new fantasy is that Ayata is actually a covert operative sent by a political faction back home to ensure they were first to make contact with the SF in the hopes of gaining the technological edge over their long-time cold-war enemies in the neighboring marsh. Ayata's just playing all innocent but she's there to bail Iri out when she makes a mistake! I mean, it makes sense on some level, who would you expect the natives to put forth to be the first to learn the aliens' language.

Really though, it is cool to see how Ayata's manner changes when they're plunged into surroundings she's built for. And I do have to remind myself she's probably pretty brilliant behind that naivete gap given that she is one of the few who speaks 'common' and does it with very little confusion.
Tenchirizu 19th Sep 2012, 5:03 AM
edit delete reply

I just have to state that I adore this page. The movement, the color. the drama and humor..Love it..That is all. (Feel better and keep up the great work)
notStanley 1st Jul 2015, 5:02 AM
edit delete reply