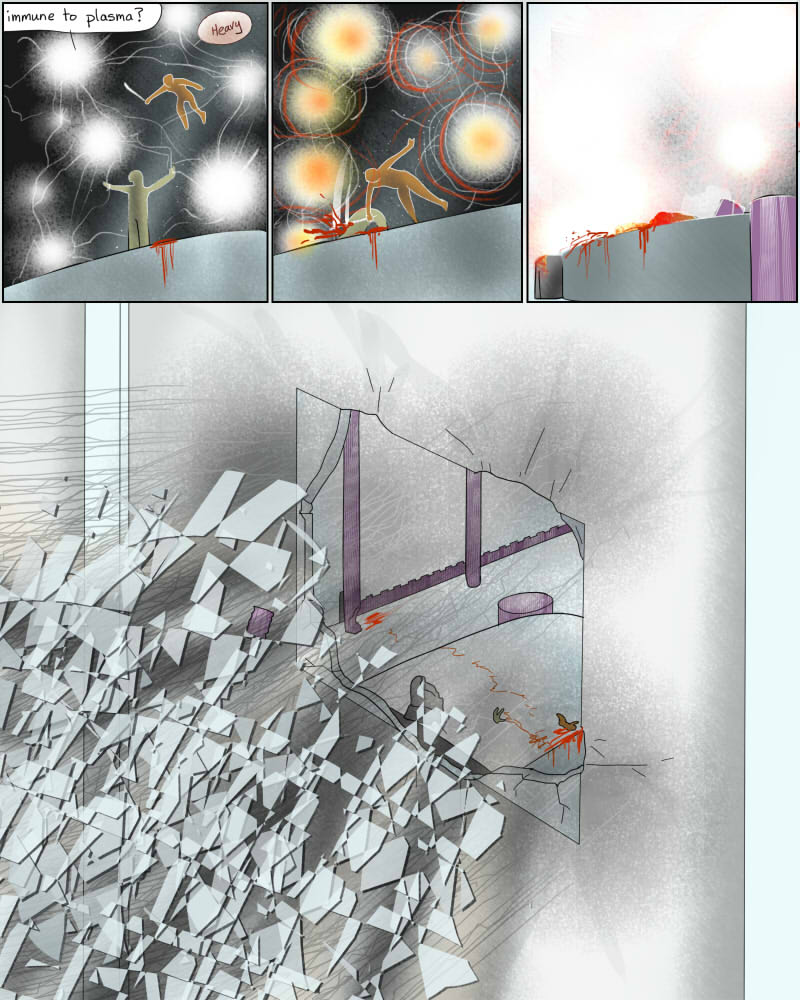 
It flails wildly and blindly !
It's super effective !
The Slavemaster takes a critical hit to the head!
The Slavemaster is dead!
Slavemasters plasma balls explode for massive damage !
Dragon King is seriously wounded!
The room is undergoing massive decompression.

Do you wish to play another game (YES/NO) ?

Naw, it's just the perspective of the podium they're on, that is hiding it.

Indeed ! Death from above !

Ha ha, yeah .. I also had the pillar pegged as an important actor .. heck, it might yet be.
Gigan 19th Jan 2014, 11:39 PM
edit delete reply
... Huh. I think Iri is going to make it. Or at least, she has a possible path. Consider the dialog in http://spacepulp.thecomicseries.com/comics/406 Dragon King is being held against going for a float in space by heavy armor. If Iri has enough strength left, she can send her blade back up there and go through it.
view 19th Jan 2014, 11:41 PM
edit delete reply

I think you called it, but let us see if she has enough strength to put thought into action.
Sheela 20th Jan 2014, 11:35 AM
edit delete reply

She's definately planning something, after all, if she was "just" going to die, it would not matter wether or not the bulkhead was up or down.
Maybe it's not for herself though, but for DK to get out of.

Hmm! DK is set to heavy so he isn't pulled out with the atmosphere while the evil one is sucked out into space. And Iri still needs to breath.
Kain Yusanagi 20th Jan 2014, 4:25 AM
edit delete reply

I like how you used that one tool that flippity-flops transparency of an image based on defined line borders. Always had fun with that in Ye Olde Paint back when it was MS Paint. Dunno if that tool even still exists in the modern one. :o
Kuratenshi 20th Jan 2014, 5:01 AM
edit delete reply

He he, yeah, looks like View had fun with the explodey bits!

Heck, he probably has fun with all the guessing going on as well. :)
James (Guest) 28th Oct 2016, 6:53 AM
edit delete reply
For all who are still mobile, it seems like rather a lot of stress is concentrating around the ex-window, and changing rooms might be a good idea.
Post a Comment