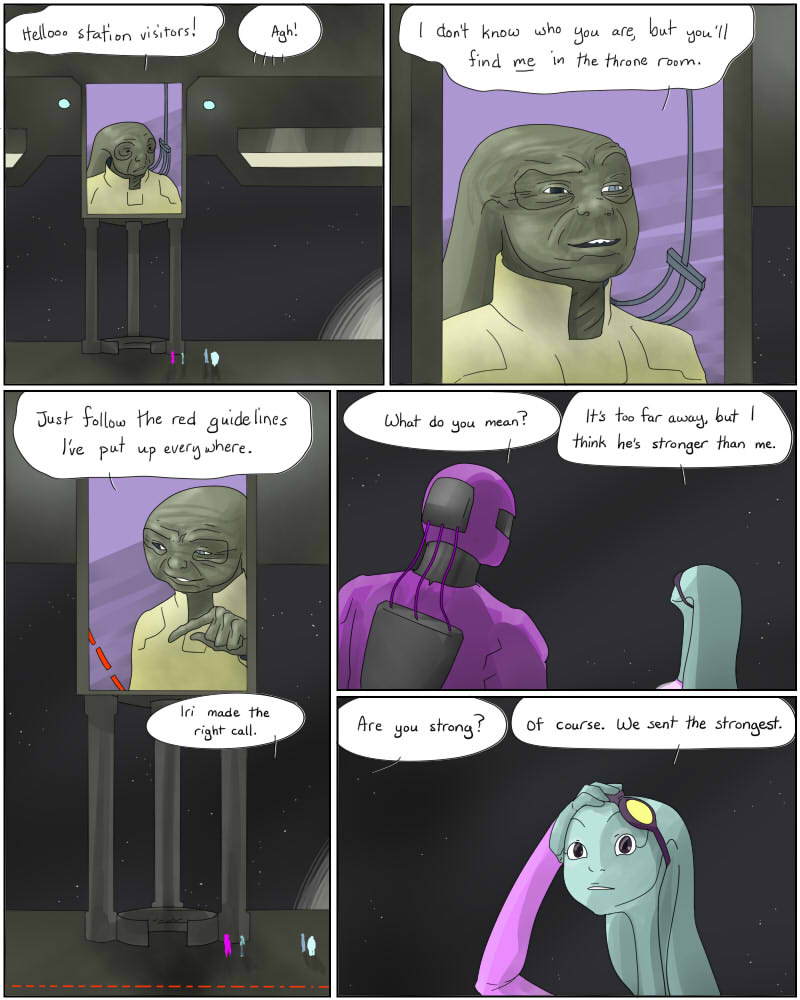 Well, since he controls them trough their cybernetics, one would assume some interface between Glorious Leader / his machines.

On a sidenote :
He looks much better in todays comic, than in yesterdays comic. :)
Also, he seems to be wonderfully quirky in an almost jolly grandfatherly way ... except that he's probably a psychotic mass murderer.
But that's just the average gramp's for you. you could say it's the intergalactic variant of an old geezer with his sawn off shotgun "defending" his front lawn from the rabble of youth.
elfolampo 27th Nov 2013, 7:58 AM
edit delete reply

Is that some kind of splitter coming out of his neck?
SpaceMonkey 27th Nov 2013, 3:14 AM
edit delete reply

Also kinda surprised nobody else is commenting on Ayata's revelation.

Ooh, maybe that's how Iri defeats Unity's glorious leader without also having to fight her way through all the ex-hunters on the station.

She pulls a trojan horse -- surrendering herself so that she get's hooked up -- then mindfucks the glorious leader. A true Poison Monkey style victory!

It would also explain why she was disinterested in the grenades. Not much use for them in her plan and potentially harmful if she intends to save the ex-hunters.
view 27th Nov 2013, 3:50 AM
edit delete reply

the leader looks suspicius like Ayata's people, besides the shorter, thicker neck. And her comment also fits.

The cables look like PM links (I asume they are normaly a PM thing, cant remember anybody else using them)