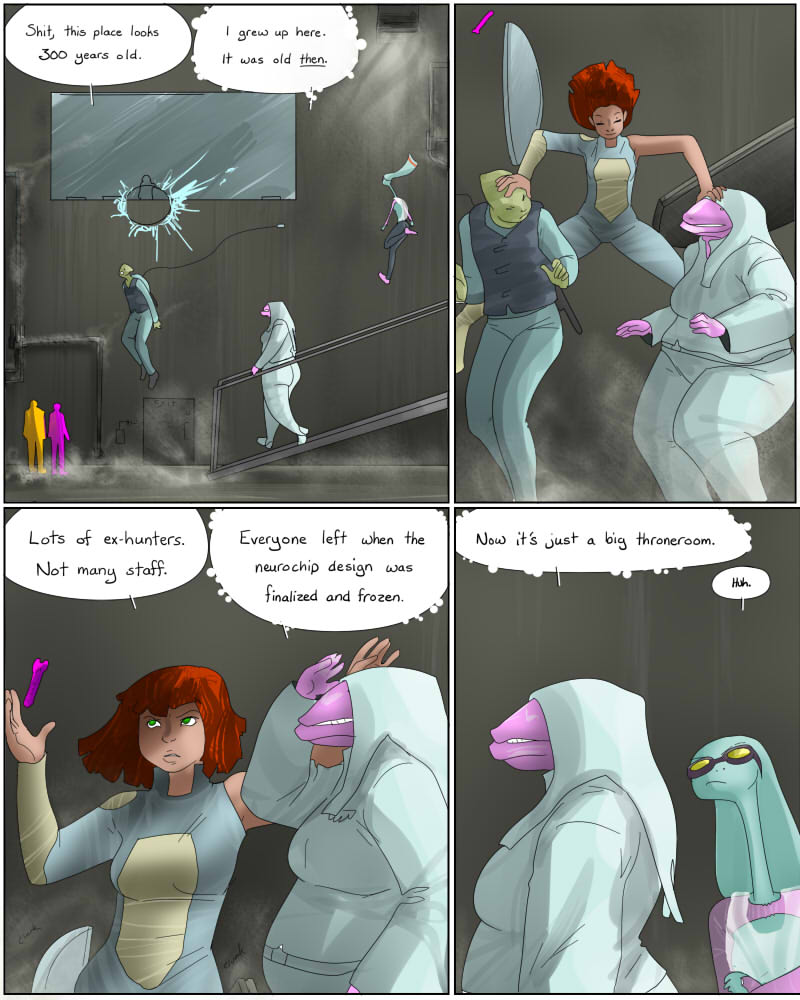 Ugh, I remembered that Ayata couldn't understand her, but I forgot to decorate the speech bubbles. It's a hard detail to remember.
Sheela 22nd Nov 2013, 5:56 AM
edit delete reply

While on the subject of the Rear Admiral (who's good at sitting down), wouldn't she have a neural chip implanted ?

ie. wouldn't she report everything back to the Slavemaster, wether she wants to or not ?
And is it part of Iri's plan ? Maybe a bit of planned misdirection.
view 22nd Nov 2013, 1:15 PM
edit delete reply

Think about it. She wasn't allowed down on the planet during the invasion...
Sheela 22nd Nov 2013, 1:23 PM
edit delete reply

She didn't know what was going on on the planet (only cyber-soldiers were, as she herself said to Kax).

Basically, the Slavemaster only allowed people he controlled directly on planet (probably to hide the genocide, as, from what the Rear Admiral said, isn't usual Unity fare). As Iri said, you only see the worst of the universe with her, so probably it was the worst of Unity that was shown so far. It's probably a decent enough galactic force, except the fact that it's ruled by a ruthless mind controlling guy who takes extreme measures to maintain control.

My interpretation is that not all of Unity is neurochipped. It seems their cyberized soldiers are and the ex-hunters were all chipped, but at least the higher ranks seemed to have been in on the development and implementation of the neuro-chip. As a rear admiral it seems as likely that this means their use of the neurochips is pretty common knowledge in Unity or the information wasn't terribly classified. Either way, she doesn't seem to be in the demographic that gets chipped and thus isn't just another terminal for Slavemaster.
SpaceMonkey 22nd Nov 2013, 3:08 AM
edit delete reply

Looks like Iri is getting better at this self teleport bit!
Antonymous 23rd Nov 2013, 4:52 AM
edit delete reply

Did she teleport or just cut a hole in the wall and jump down?
Post a Comment