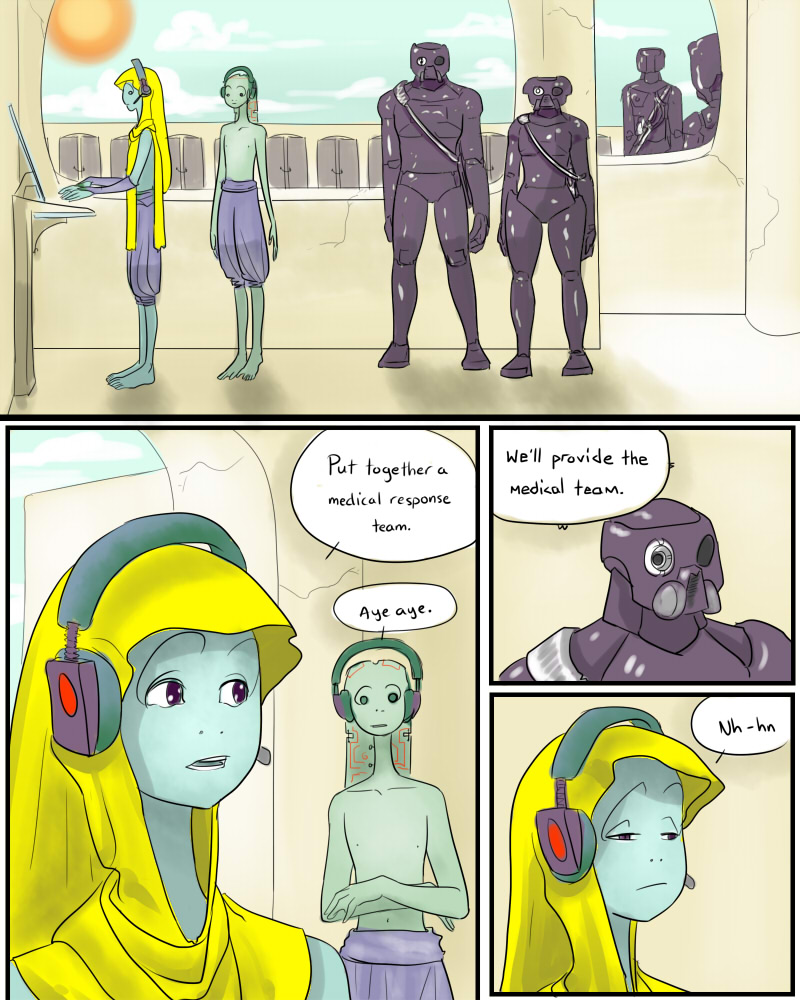 Maybe some day it will be. But I've got to learn more and practice more.
Centcomm 4th Jul 2012, 3:17 PM
edit delete reply

I like the EVERYTHING so far afkjhsalkfjhsak D:
view 4th Jul 2012, 4:56 PM
edit delete reply

Oh you'll get coloring down just fine. You've got a hell of a handle on every other aspect of comics. /I/ believe in /you/. And hey, you have a thing for tall slender characters a lot don't you, heh.
view 4th Jul 2012, 4:56 PM
edit delete reply

*gasp*. Is this like one of those pulps where the last human is the chick on the escape pod and she has an insatiable sexual appetite in a vain attempt at repopulation? Like Species kinda, but with even more sex somehow? And nuclear weapons in a useless but awesome plot twist? IS IT?
view 5th Jul 2012, 12:40 AM
edit delete reply

No, she's not human. She's a poison monkey. There's roughly ten billion of them, and most of them are not in escape pods.
JasperWB 5th Jul 2012, 1:05 AM
edit delete reply

20/80 for in pods and not in pods? For a poison monkey she looks alright. I might make a pass at that monkey.
Brex (Guest) 5th Jul 2012, 1:28 AM
edit delete reply
Oh god.. those last 3 posts were hilarious!
*ahem* Anyways, view I know this comic is going to be more humorous than previous, but like before you have me curious as to who and what we are looking at. Do you have a name for them as individuals and species along with some background on their race perchance?
view 5th Jul 2012, 2:06 AM
edit delete reply

Iridium Lake is a Poison Monkey - less well known by their technical name "Helex Primans". They were discovered when barely in the space age, and shortly after contact was made they destroyed their homeworld with a nuclear war. Apparently, it's something they did every hundred years or so - there are still more than two billion of them still living on the irradiated hunk of rock they call a homeworld.

In the past three generations they've happily flooded off-world into general population. However, they're absolutely not well-liked. People think they are dirty at best, and radioactive at worst. They are definitely considered warlike barbarians, regardless. The hundreds of governments on their fractured homeworld can only agree on one thing: aliens cannot be trusted.

They fill roughly the same role as the Vorcha in Mass Effect, socially speaking.

These green amphibians are a new discovery, not even advanced enough to have discovered radio. They don't have a technical name yet, but they will probably be named after their star - Carix.

Does smacking them around make them stronger then?
cattservant 5th Jul 2012, 9:57 AM
edit delete reply

Well now that i think about it...if that's their planet and the girl is from another world she's the alien.
cattservant 5th Jul 2012, 1:36 PM
edit delete reply

So far I'm impressed. You make it sound like this is your first attempt at a color comic, and if so then I'm even more impressed. I look forward to seeing where this comic goes.
cattservant 7th Jul 2012, 7:11 PM
edit delete reply

i wonder if their species has pets like ours. Alien cats would be interesting to say the least.
Meh.Aloe (Guest) 8th Jul 2012, 10:35 PM
edit delete reply
Oooh, this exists! Yaaay more view comics! :D More science fiction! I am filled with enthusiasm at the further reading of this in the future.
Gigan 9th Jul 2012, 6:11 AM
edit delete reply
I'm not quite sure if it's a male or a female of the race, but the one in the yellow drape has some great facial features/expression. Relatively few lines, but quite agreeable, win.
cattservant 9th Jul 2012, 7:05 PM
edit delete reply