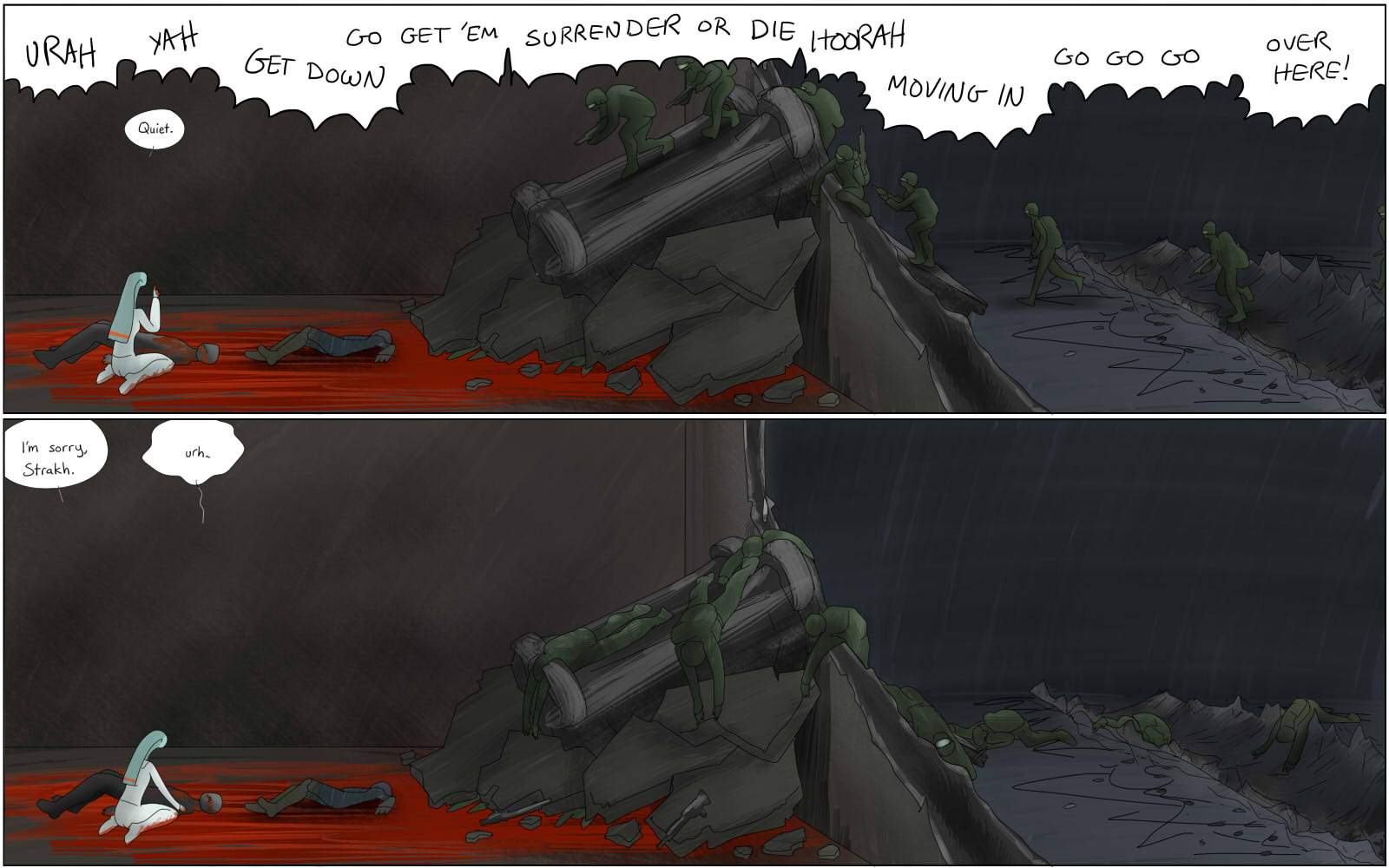 It's the big reveal! Double-wide splash page to celebrate.

What does this mean? Ayata is mad powerful?

My guess is that Ayata is basically an empath, able to not just recognize others emotions but also to change them. This is why Iri says that Ayata feels like multiple people when interacting with multiple people other than Iri, since Ayata is reflecting/reading the emotional state of those around her.

So maybe this scene depicts something she didn't know she could do, and only with the power of her own emotion towards Strakh's death could she knock out/kill the soldiers.
RandomTroll 15th Oct 2013, 11:59 PM
edit delete reply

Obvious indeed, for it is soldier nap time, and these guys don't mess around when it comes to their naps. I mean look at the guy hanging off the pillar on the other side of the wall. That is one dedicated napper! I salute you fine soldiers of sleepy time!
Bellar 16th Oct 2013, 8:39 PM
edit delete reply

I dunno man, I think the guy on the far right who manages to nap with a jagged pieced of concrete in his crotch, is the more dedicated powernapper of the bunch. :D
cattservant 16th Oct 2013, 2:05 AM
edit delete reply

Oh Strakh, that's a lot of blood on the ground. And while head wounds do bleed a lot (especially when they're so.. severe..) I imagine a lot of that also belongs to you.
view 16th Oct 2013, 3:20 AM
edit delete reply

To be fair, there were half a dozen smashed soldiers under that wall beforehand.
SpaceMonkey 16th Oct 2013, 3:56 AM
edit delete reply

Good point, missed the bodies under there before >.<

That's one really effective reveal. :D Of course there have been hints that there's more to Ayata than we see, but I think they were fairly subtle (I think view is good at that :D ) and this is an awesome and very impactful page.
G-Rock 16th Oct 2013, 6:03 AM
edit delete reply

Work must be draining me more than I thought. I did not see this coming at all.
Moonmean 16th Oct 2013, 9:22 AM
edit delete reply

I love you, View.

Well, I could state my theories, but you know what, I'll just let other people have their fun being surprised in case I'm correct. Unrelated to those, but related to this page: remember how frustrated Ayata was when talking to those other politicians over TV screens and not face to face? Yeah. Also, Iri pretty much plainly stated she was hiding... uh, this.
Rann 16th Oct 2013, 1:33 PM
edit delete reply

She has the power of the Pax! They all just lied down and died! Miranda AAAAAAAAAAAAAAAAUUUUUUUUUUUUUUUUUGH!
Gyde (Guest) 16th Oct 2013, 5:23 PM
edit delete reply
'Least they didn't turn to Reavers.

Alright! Now that this is confirmed it's time for some speculation!

Is Ayata individually gifted or is her whole race like this? Her whole race being capable of this would explain Unity's interest in them and lend another good reason as to why orbital bombardment was the threat which commanded their obedience -- since their range is likely limited.

OOH! I wonder if view's comment about the main villains having not yet been introduced was meant to indicate the role Ayata's people have yet to play in the story. I'd wager an entire race of empaths/telepaths would make for as much if not more of a threat than Unity, since they can affect the SF peoples more so than a cybernetics dependent hivemind.

I bet Ayata actually found Poison Monkeys frightening because she can't get a handle on them since they aren't descended from the ancients' race.
SpaceMonkey 16th Oct 2013, 9:04 PM
edit delete reply

Or Iri just took down the slavemaster on the other side of the planet or otherwise affected the cyberized troops and view's just trolling you all. I really don't even have a guess at this point.
exegesis 16th Oct 2013, 9:11 PM
edit delete reply