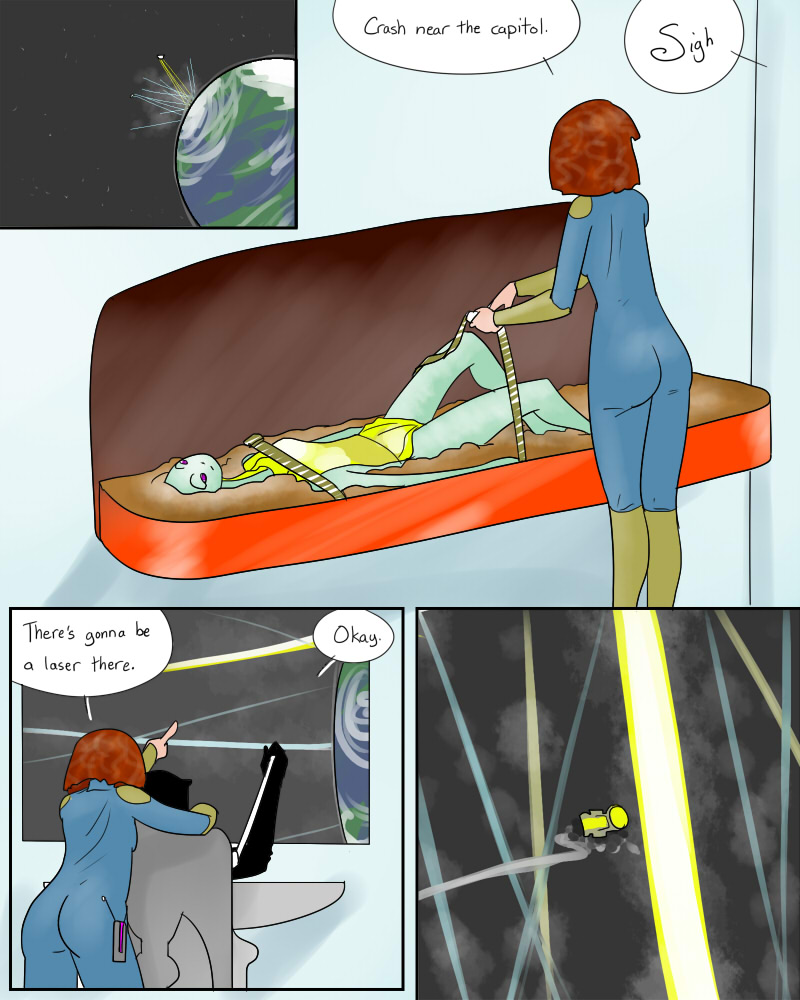 Hmm, of course! The best way to avoid being found is to be dead! Anyone getting it?
cattservant 24th Aug 2012, 10:32 PM
edit delete reply

If you're seeming down and dead
No one's digging up your head!*

Mmm...nice ass there, Iri. But why you gotta destroy Jagi's ship and make a pirate fleet shoot up the planet to get to you?! And ruin Ayata's nap in a very...interesting way to sleep. At least I think that's some kind of custom bed. Or weird emergency crash brace thing?
view 24th Aug 2012, 9:33 PM
edit delete reply

Ok then, it does make sense. Though an Ayata species dirt bed would have been interesting too! Lol
cattservant 24th Aug 2012, 10:25 PM
edit delete reply

So Iri is a Practitioner of Precognition!
How far ahead are her predictions accurate?
view 24th Aug 2012, 10:29 PM
edit delete reply

You mean what where and when? The clearer her perception the more accurate the result?
JasperWB 25th Aug 2012, 12:36 AM
edit delete reply

I'd think that if something is precise it not only gets spatial accuracy but timing. So she knows where it will hit but is not so good with the crucial when, I'd figure. That or view is making a joke which...I ruined lol
SpaceMonkey 25th Aug 2012, 1:23 AM
edit delete reply

If you want my theory on the meaning of accuracy here....

Based on her previously saying something about seeing all the simple paths to lead to failure she chose one that was so chaotic she couldn't see the outcome. This leads to to believe she sees many potential futures and the more time between her and an event the less likely she is to be perceiving the reality that will actually *be*. Not to mention if there are many individuals and decisions swirling through the mix she's statistically as good as guessing cause there're so many potential paths things may take.

I dunno. I could easily be completely off. It would just make sense in the context of view's comment since then she'd always be accurate but not be sure of which future is coming (though she'd become increasingly sure of an event as it approached (chronologically).

So she sees things in the 5th dimension. That would be an interesting development.
view 25th Aug 2012, 2:02 AM
edit delete reply

Spacemonkey is missing a few pieces of the puzzle because I haven't put them in the comic yet. But he's on the right track.
SpaceMonkey 25th Aug 2012, 4:02 AM
edit delete reply

I figured I was still missing details since you tend to be pretty specific and well defined when it comes to plot elements.
elfolampo 25th Aug 2012, 6:45 PM
edit delete reply

I can't imagine what would a planet of billions of nuke slinging, time seeing, very sturdy, item-teleporting, physically strong, and generally very violent beings would be like.

And how it would have appeared to space travelers first happening there.
view 25th Aug 2012, 6:58 PM
edit delete reply

To be honest, Iri's not a terribly competent hunter. She's got the powers, sure, but she's kind of an idiot without any kind of restraint.
cattservant 26th Aug 2012, 12:48 AM
edit delete reply

So, dumb luck is another of her 'powers'.
Razingthebar (Guest) 26th Aug 2012, 3:16 AM
edit delete reply
Considering her plan seems to be: 1.Piss of already peeved pirate captain who you have done something to. 2. Fly TOWARDS deadly laser beam fire that can, and will wreak you ship. 3. Crash on planet near a heavily populated city, being the capitol. 4. Not die 5. Escape all pursuers. She's heavy on the "dumb". And considering she probably succeed the "luck" too.
view 26th Aug 2012, 3:19 AM
edit delete reply

Well, the plan is zany but not crazy. You'll see it come together this chapter.
SpaceMonkey 26th Aug 2012, 3:45 AM
edit delete reply

Well, in her defense, you don't have to be super competent at being a hunter if you're good enough at winging it - and by winging it I mean diving into the most volatile situations you can find, making everything blow up, and dashing out slightly singed in the nick of time laughing maniacally as you go.

I dunno. Maybe that's just my impression of her. I just mean that being able to make consistently correct choices in the heat of the moment is an actual skill and can sometimes be substituted for knowing what you're doing with decent results. :P
view 26th Aug 2012, 3:54 AM
edit delete reply

I noticed she says capitol there. Does she mean it as "hill/palace/place" of government?
view 26th Aug 2012, 5:41 PM
edit delete reply

Yeah, she definitely doesn't mean "large-scale space ship" - she's trying to get away from them!
Gigan 29th Aug 2012, 12:02 AM
edit delete reply
Hmm. Reminds me a little bit of a weak kinetic/teleport from various and sundry psychic stories, crossed with... uh, Mua Dib? I want to say precognitive, but this is a lot more like how things were described in Dune, with all the pathways stretching out, converging, etc. Neat.
Post a Comment