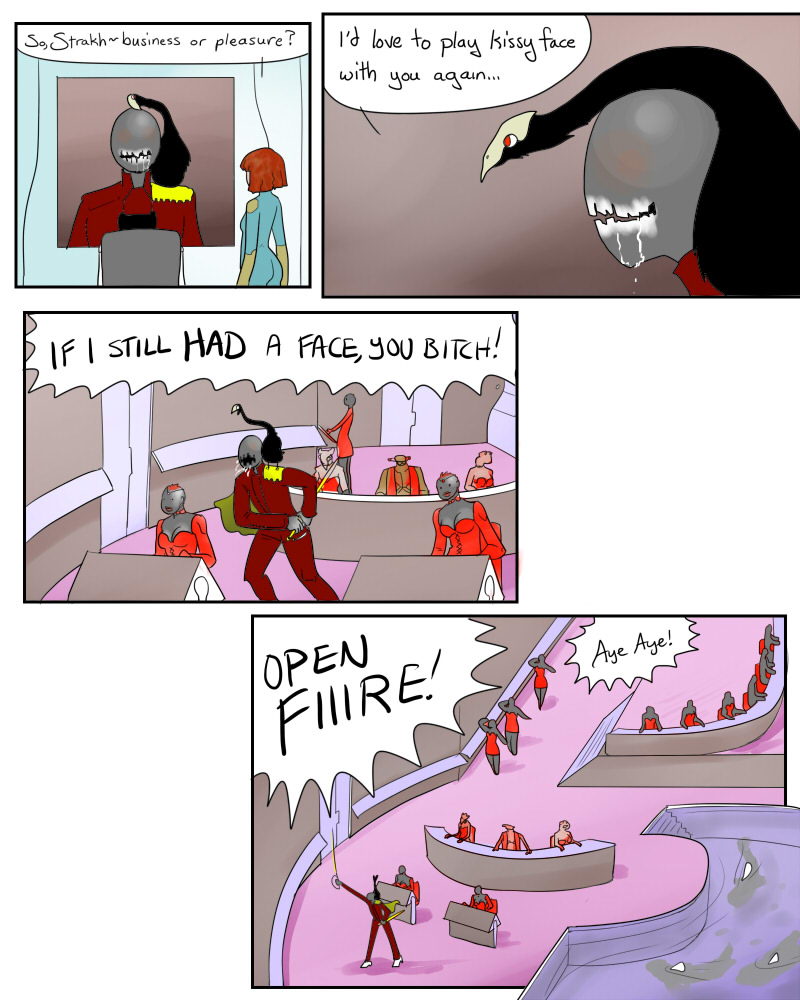 Well, thank you for the heavy lifting!

Wait, so he ISN'T naturally that ugly and drooly? I guess his natural face must be more like those women next to him.

Speaking of which, I notice most of the people are women in sexy red mini-dresses. This guy has some serious sexual suppression issues going on, doesn't he?
view 23rd Aug 2012, 10:13 PM
edit delete reply

It's good to be king!
Meh.Aloe (Guest) 24th Aug 2012, 5:02 PM
edit delete reply
"I notice most of the people are women in sexy red mini-dresses. This guy has some serious sexual suppression issues going on, doesn't he?"

Still pulls out the sword in the middle of a spaceship battle. Though he's probably blind so who knows what he may be imagining to compensate. A real pirate battle probably. And I like the sharks. Evil villain lair-ish. By chance would they have lasers strapped somewhere on them?
cattservant 23rd Aug 2012, 10:31 PM
edit delete reply

Words of wisdom from a courageous commissar:

"Drive my tank closer so I can hit them with my sword!"
Meh.Aloe (Guest) 24th Aug 2012, 5:00 PM
edit delete reply
The starship Enterprise on The Next Generation was originally supposed to have dolphin tanks, allowing super-intelligent dolphins (with their natural affinity for 3D navigation) to work as part of the crew.

I'm imagining the shark tank here is just the pirate equivalent of that. :P

I love that idea. YOINK!
Meddy (Guest) 24th Aug 2012, 4:31 AM
edit delete reply
This guy's Bridge Bunnies are all smiles at the idea of attacking someone. XD

Atleast, he had the decency to make stairs out of his space-sharks pool. Also, notice how the pool goes beyond the border of the panel.
Meh.Aloe (Guest) 24th Aug 2012, 5:01 PM
edit delete reply
The skimpy red uniforms remind me of the female crew uniforms from the original Star Trek, which just makes it all the more hilarious. :P
Paul (Guest) 11th Jul 2013, 6:03 PM
edit delete reply
It isn't cool to hold a grudge, man. :(
Post a Comment