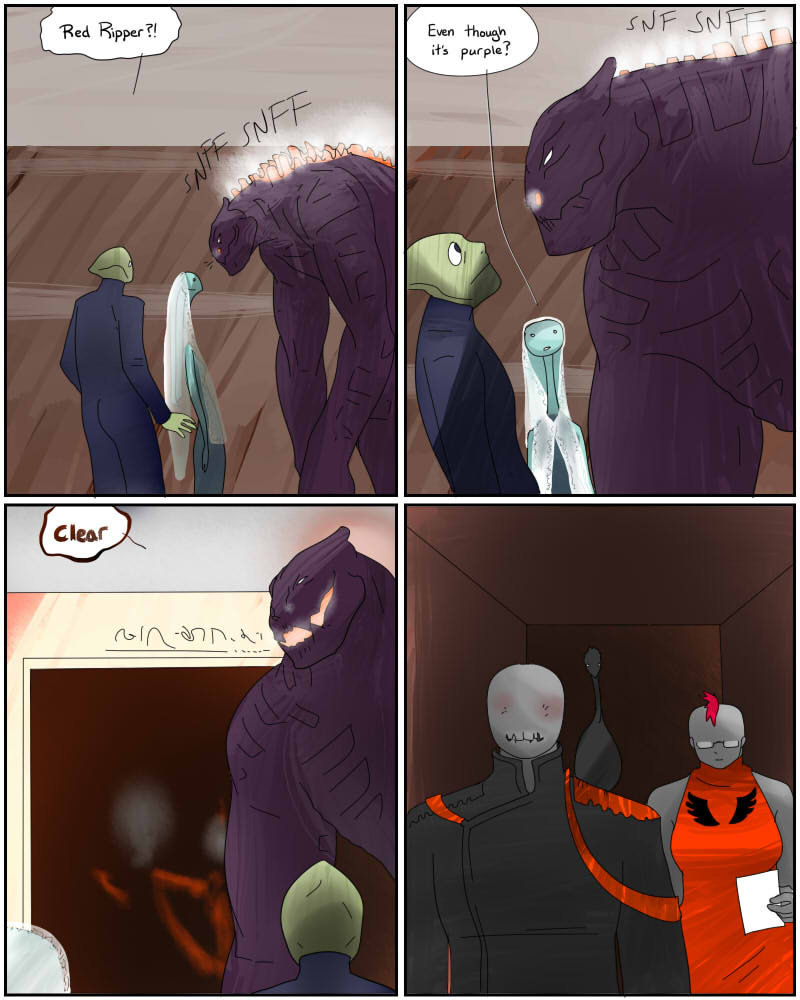 I don't know why, but I laughed more than I should have.

View, are red rippers available through the black market as slaves or do you have to train and breed your own? And are they illegal to own as well? Having one of them would solve a lot of problems...
view 2nd Sep 2013, 12:35 AM
edit delete reply

As in " sir, that is very illegal to own" or "sir, please do not press that button?" Also, are they born that way o drugged up like genehorrors?
view 2nd Sep 2013, 1:46 AM
edit delete reply

Technically speaking, the biomorphic psychers that are called "genehorrors" are named after these sorts of monsters, not visa-versa.
Sheela 2nd Sep 2013, 4:42 AM
edit delete reply

Ah, nothing like having a genehorror as bodyguard to put yourself in respect.

to be fair though, Red Ripper seems to be significantly more in control of him/herself than the other genehorror we saw.
VlRGlL 2nd Sep 2013, 4:20 AM
edit delete reply

Well, not sure if that's a relief or not. On one hand, the big guy wasn't Strakh, yet on the other hand you'd have to be one scary ass dude to be able to boss tall dark and purple there.
Bellar 2nd Sep 2013, 5:06 AM
edit delete reply

Not unless red rippers are more simple minded. I'm sure being a creature whose existence is illegal means you either fight for your life against the law wherever they find you, or you cozy up to someone who has the power to exist outside the law, such as Strakh here. The red ripper knows it could kill Strakh, but serving him is beneficial since he controls a planet and a pirate fleet.
view 2nd Sep 2013, 5:24 AM
edit delete reply

Well, Strakh also is quite friendly to it, and treats it like a pirate rather than a monster. It's pretty loyal.
Phuji 2nd Sep 2013, 8:09 AM
edit delete reply

Does she have a crush on Strakh ?
Seafog (Guest) 2nd Sep 2013, 6:04 AM
edit delete reply
How and why did big purple get the name Red Ripper?

Did I understand correctly that big purple's species is illegal? What did they do to make their entire SPECIES illegal???
araconid 2nd Sep 2013, 12:00 PM
edit delete reply

Because they are genetically modified super soldiers. I'm sure that the entire species that they are based from are not illegal, but this is like breeding a fighting dog: its big, its angry, and all it was made for was to kill. I'm not sure if they would execute him for existing; I mean, not like he really had a choice to be born. If I were the feds, I'd just put him on a planet and have him do heavy labor if he were found out.

Edit: and by super soilders, I mean they are really good at there job. I'm sure there are people out there in the universe that have shot up their soilders with steroids, and no one bats an eye. But look at big red here:easily three meters tall, probabpy wieghs somewhere around a ton or two, immune to all forms of fire arms save the "lazer pointer" and larger missiles. Give this guy a large gun-or a mass manipulator suit-and he would wreck any battlefield.
view 2nd Sep 2013, 1:14 PM
edit delete reply

Oh, you're underestimating the power of our friend the Red Ripper, and the general fear of genetic manipulation. The two are related, of course.

If you were to reread the comic, you would see several scenes about the topic scattered around.

One could say, that the danger of gene horrors, is why hunters like Iri are so feared as well .. because they can damn well handle big mean bastards like that.

The only thing scarier than a big monster, is the even bigger monster that hunts it.
araconid 2nd Sep 2013, 1:24 PM
edit delete reply

Only time I remeber seeing him before was chapter two... but does he make probability shadows because of his mutative state or what ever drugs they used to make him?
Bellar 2nd Sep 2013, 8:36 PM
edit delete reply

no probability shadows unless he's using drugs to make his behavior erratic and unpredictable, which seems unlikely since he has to work with Strakh and I'm sure Strakh would rather not lose any more bits of himself to anything erratic and red.
JasperWB 3rd Sep 2013, 4:56 AM
edit delete reply