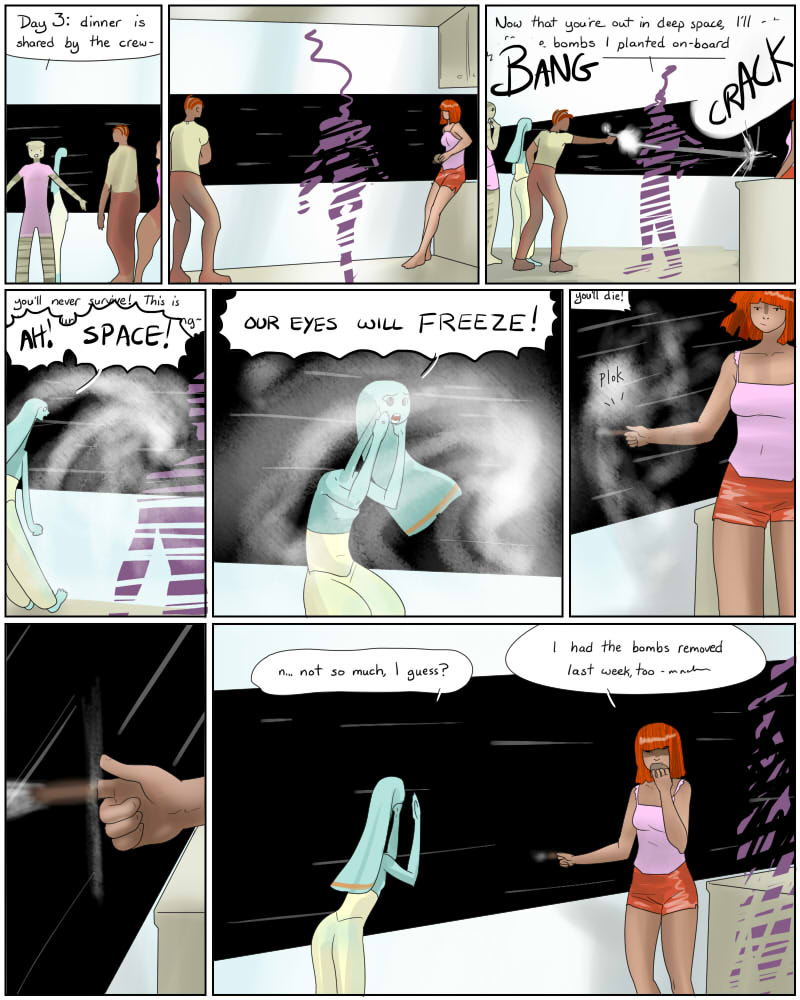 Space movies always piss me off. Apparently they keep their interiors pressurized to 8 billion PSI or something.
User comments:
UmberGryphon 19th Jul 2013, 12:12 AM
edit delete reply

By pulling. It's not even one atmosphere of pressure.
UmberGryphon 19th Jul 2013, 12:46 AM
edit delete reply

Wikipedia-fu, activate! If it were 1 atmosphere of pressure, it would be 101325 newtons per square meter. Let's say that hole is a square centimeter, so divide that by 10000 and it would take about 10 newtons of force for her to pull her finger out. A newton is how much force it takes to lift 102 grams, so as long as Iri can lift 1 kilogram, she's fine.

Don't be harsh. A lifetype of crap science in science fiction movies makes everyone automatically think depressurization is stronger than it is.
Centcomm 19th Jul 2013, 4:08 AM
edit delete reply

the main issue with Decompression is cold and radiation damage. ---

The best data I have comes from the chapter on the effects of Barometric pressure in Bioastronautics Data Book, Second edition, NASA SP-3006. This chapter discusses animal studies of decompression to vacuum. It does not mention any human studies.

page 5, (following a general discussion of low pressures and ebullism), the author gives an account of what is to be the expected result of vacuum exposure:
"Some degree of consciousness will probably be retained for 9 to 11 seconds (see chapter 2 under Hypoxia). In rapid sequence thereafter, paralysis will be followed by generalized convulsions and paralysis once again. During this time, water vapor will form rapidly in the soft tissues and somewhat less rapidly in the venous blood. This evolution of water vapor will cause marked swelling of the body to perhaps twice its normal volume unless it is restrained by a pressure suit. (It has been demonstrated that a properly fitted elastic garment can entirely prevent ebullism at pressures as low as 15 mm Hg absolute [Webb, 1969, 1970].) Heart rate may rise initially, but will fall rapidly thereafter. Arterial blood pressure will also fall over a period of 30 to 60 seconds, while venous pressure rises due to distention of the venous system by gas and vapor. Venous pressure will meet or exceed arterial pressure within one minute. There will be virtually no effective circulation of blood. After an initial rush of gas from the lungs during decompression, gas and water vapor will continue to flow outward through the airways. This continual evaporation of water will cool the mouth and nose to near-freezing temperatures; the remainder of the body will also become cooled, but more slowly.

"Cook and Bancroft (1966) reported occasional deaths of animals due to fibrillation of the heart during the first minute of exposure to near vacuum conditions. Ordinarily, however, survival was the rule if recompression occurred within about 90 seconds. ... Once heart action ceased, death was inevitable, despite attempts at resuscitation....

[on recompression] "Breathing usually began spontaneously... Neurological problems, including blindness and other defects in vision, were common after exposures (see problems due to evolved gas), but usually disappeared fairly rapidly.

"It is very unlikely that a human suddenly exposed to a vacuum would have more than 5 to 10 seconds to help himself. If immediate help is at hand, although one's appearance and condition will be grave, it is reasonable to assume that recompression to a tolerable pressure (200 mm Hg, 3.8 psia) within 60 to 90 seconds could result in survival, and possibly in rather rapid recovery."

Note that this discussion covers the effect of vacuum exposure only. The decompression event itself can have disasterous effects if the person being decompressed makes the mistake of trying to hold his or her breath. This will result in rupturing of the lungs, with almost certainly fatal results. There is a good reason that it is called "explosive" decompression.
Centcomm 19th Jul 2013, 4:12 AM
edit delete reply

The decompression time will depend on how big the hole is. For a fast estimate, you can assume that the air exiting through the hole will travel at the speed of sound. Since the atmosphere drops in pressure as it moves through the hole, the effective rate at which the atmosphere leaves is at about 60% of the speed of sound, or about 200 meters/second for room-temperaure air (see derivation by Higgins):

P = Po exp[-(A/V)t*(200m/s)]
This gives you a quick rule of thumb, the one-one-ten-hundred rule:
A one square-centimeter hole in a one cubic-meter volume will cause the pressure to drop by a factor of ten in roughly a hundred seconds.
(for quick approximations; only roughly accurate). This time scales up proportionately to the volume, and scales down proportionately to the size of the hole. So, for example, a three-thousand cubic meter volume will decompress from 1 atmosphere to .01 atmosphere through a ten square centimeter hole on a time scale of a sixty thousand seconds, or seventeen hours. (it's actually 19 hours by a more accurate calculation).
Zapp (Guest) 20th Jul 2013, 10:05 PM
edit delete reply
Spare me your Space-Age technobabble, Attila the Hun!
Frosty The Pyro (Guest) 19th Jul 2013, 6:48 AM
edit delete reply
Space isnt actualy cold though. Temperature (and therefor hot and cold) is a measure of atmoic motion, as there are no atoms in space (eets a vacum), it has no temperature. Its null, not cold. And as there is nothing out there in space the only way to transfer your body heat out is radiation (aka glowing). And though we all emit some amounts of radition, it's more or less negligable.

Wet membranes will quickly lose heat because the water will flash-boil away, though.
pkrankow 19th Jul 2013, 4:03 AM
edit delete reply

Thank you for doing the math. Gonna still leave one HELL of a hicky.

While "empty space" do have a temperature, the amount of mass in it is so low, that the transferrance of heat is incredibly low.

Basically, there's a bit of dust and gass out there, despite the vacuum. and that's what absorbs heat. But it does so pretty slowly - Still, if you get your handson a rock or a piece of metal that has been out in space for a while, it's going to be quite cold .. so don't lick it ! >_<

So, if someone ended up in space in a space suit, they would run out of air first, run out of water second ... but I don't think they would freeze to death.
JasperWB 19th Jul 2013, 6:39 PM
edit delete reply

Wouldn't you at least bruise up something fierce on the end of your finger as well? Again I know your body isn't at 8 billion PSI either so it wont explode but it would try to equalize I'd think and thus pull blood trying to pull it through the finger.
view 19th Jul 2013, 7:16 PM
edit delete reply

It's exactly like sticking your finger in a vacuum hose. Literally exactly like that.
Sheela 19th Jul 2013, 7:17 PM
edit delete reply

Depends on how long you leave it in there.
I suspect that Iri don't expect to be standing there all day long. :D
THE_BEHOLDER 19th Jul 2013, 1:59 AM
edit delete reply

Where are those anti-eye freezing goggles Ayata bought when she needs them?
Bellar 19th Jul 2013, 3:42 PM
edit delete reply

"I knew I forgot to pack my anti-eye-freezing goggles!"

I hope they packed enough duct tape to plug all the holes that will inevitably be shot in the windows over the course of the trip.
Revenant 19th Jul 2013, 6:11 AM
edit delete reply
"AH! SPACE!" is a funny exclamation. Like "space" leaked into the ship.

Then again Ayata's a little fuzzy on the details of space travel, so maybe she thinks of it that way.
Meh.Aloe 22nd Jul 2013, 7:14 AM
edit delete reply

Space air is flooding in! GOGGLES ON!

http://p.twimg.com/A7rMwIHCQAAtMLN.jpg:large
Brex 19th Jul 2013, 12:56 PM
edit delete reply
My question is direct at the obvious. Why the hell do they have windows in a spaceship? I mean structurally speaking it is the weakest part of the whole. View, can that room seal itself off or jettison itself when damaged?

I mean I don't want to sound like I am nitpicking, but seeing that just had me twitch. Also I am not directing this observation at View, but to damn engineer who thought it would be a good idea to have windows in outer-space. I just figure that since View has been working on this comic long enough and has place a ton of thought into it, that the phenomenon that is the comic making itself would have kicked in by now.
view 19th Jul 2013, 1:07 PM
edit delete reply

Heheh, it's a luxury microyacht.

Well, considering that they have stuff like mass shedding tech, I suspect they also have some rather strng windows and force fields to protect the windows.
Rann 19th Jul 2013, 1:28 PM
edit delete reply

Iri's all like "This is why getting this sort of taskforce together takes a long time. It involves finding and removing things like bombs."

Though in that case she might have thought to remove the taunting holomessage too. Sometimes for someone with very advanced psychic foresight, she's kinda bad at the regular kind.
view 19th Jul 2013, 1:49 PM
edit delete reply

She found the bombs because they would have exploded. This incident isn't even a blip - she didn't realize there was a hologram.
Bellar 19th Jul 2013, 3:44 PM
edit delete reply

It helps make for great footage though when Iri stops a terrorist attack and prevents depressurization (though that last thing might only seem impressive to lubbers).
Bellar 19th Jul 2013, 3:47 PM
edit delete reply

So, taking a stab among all the physics being thrown around, it would take a really long time before anything really bad happens to them in that room from the bullet sized hole, there wouldn't be so much "sucking" from all the air leaving the room from such a small hole, and Iri's finger is going to be ok for the most part. Correct me if I got any of that wrong, cause do find it interesting and an added bonus to my over all enjoyment of the comic.
view 19th Jul 2013, 10:51 PM
edit delete reply

Yup, it is basically exactly as dangerous as Iri is making it look.
Mister Flames (Guest) 20th Jul 2013, 5:37 PM
edit delete reply
Reminds me of a Heinlein short story, "Gentlemen, Be Seated." This was written back in the Forties, but they had an idea of how dangerous things would be.
Post a Comment