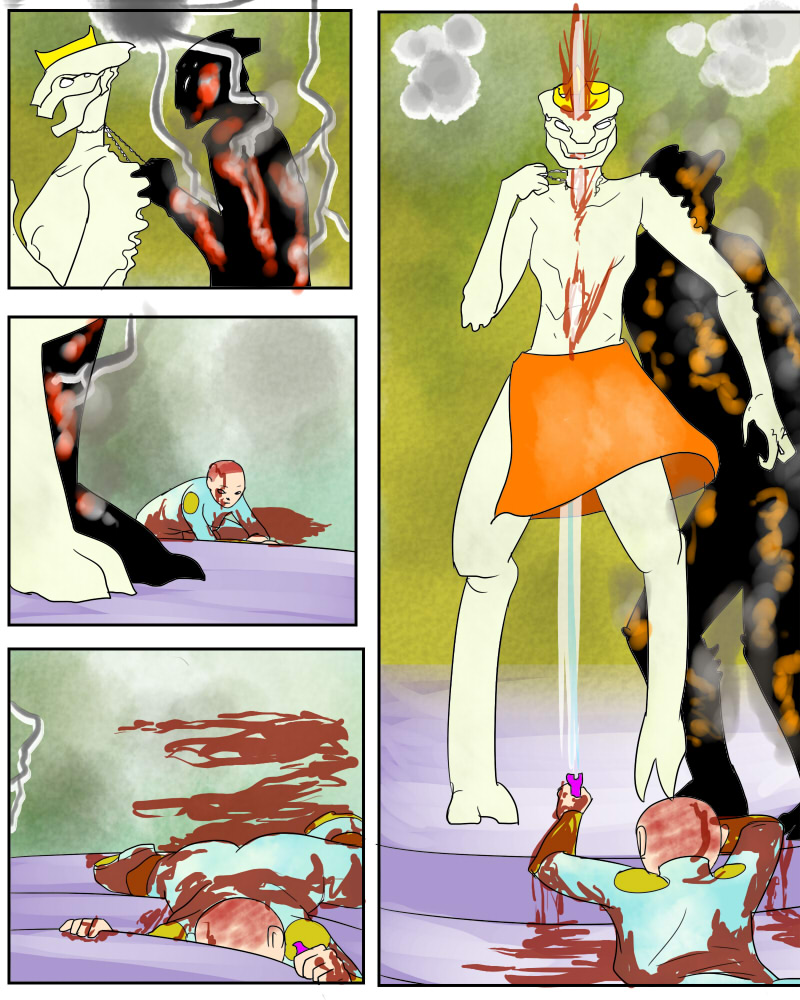 First thought was 'that must hurt'. Then I noticed that the comment is valid for each character on this page.
Centcomm 10th Aug 2012, 9:42 PM
edit delete reply

As a side note, I'm pretty sure this flashback is the most gruesome/painful scene in the comic. I guess my MO is to do an excessive intro at the end of the first chapter to scare my readers off.
Sheela 11th Aug 2012, 7:00 AM
edit delete reply

Yeah that's quite the way to get stabbed. Especially for a female...probably. I'm still interested in that oil black shadow dude. And if Iri has crazy healing factors, I notice her hair is gone so I'm wondering if she's up to something.
SpaceMonkey 10th Aug 2012, 11:33 PM
edit delete reply

The hair was the first thing I noticed here. I was thinking it's probably just View tweaking his characters as he goes since he's still starting out? But perhaps not... perhaps... something more sinister?
view 11th Aug 2012, 12:14 AM
edit delete reply

YOU GUYS ARE CRAZY I TOTALLY DIDN'T FORGET TO ADD THE STUBBLE.
JasperWB 11th Aug 2012, 1:23 AM
edit delete reply

Oh what do you know, you're right! And I'm sure there was no post upload edit. Nope. I just know that if SpaceMonkey and myself hadn't been huffing glue we would have seen it right.

That hair is gonna take ages to regrow, unless you're me and can grow hair from ears to neck in a couple of weeks. Every single time it does that it looks better than before for some reason...
CyberSkull 11th Aug 2012, 12:56 AM
edit delete reply

I wouldn't say that is painful, considering the instant nature of the beam hitting the brain. I'm mostly wondering if the brain had any time at all to be aware that they are dead.
pensivedragon 11th Aug 2012, 2:51 AM
edit delete reply

Well, that depends on how fast the sword extended...

Aha ahah !
Toldya that Swordy Sword was just making heroic poses before it saved the day !

I wonder what the blade is made of. It certainly is not cauterizing any wounds it makes.
view 11th Aug 2012, 3:32 AM
edit delete reply

Now we have proof that swordy sword knows the ins and outs of a woman
view 11th Aug 2012, 5:05 AM
edit delete reply

It's a pulp ... in pulps you always have lots of bad puns and sexual innuendo.

Heheh. Puns and innuendo. It's what they keep me around for. Then exile me for later.

Well, I guess that depends on how many electrons he's charged with at the moment of sighing.

More importantly, calling view a positive thing is totally objectifying him/her as a sexual hotdog .. erhh, I mean a sexual object ... this will not stand !

I'm guessing it has tough and scaly skin in the areas that has a need to bend, like on reptiles such as alligators and crocodiles.
view 11th Aug 2012, 5:32 PM
edit delete reply

So more like a lizard which has a skeleton with a tough hide/boneplates on it's skin ... as opposed to an exoskeleton like an insect.

Yes. A proper exoskeleton is actually not very useful at such sizes/weights. But armor can be.
elfolampo 11th Aug 2012, 5:34 PM
edit delete reply

It's probably the light effects, but the queen seems to have a different color in every page she's in.
view 11th Aug 2012, 7:47 PM
edit delete reply

I make her whatever color she needs to be to stand out. I'm still learning.
cattservant 13th Aug 2012, 1:48 AM
edit delete reply

As I look at this page again. I am reminded of the fact that the vast majority of impaling depicted in movies and art, are usually just in one end, and out the other. But you have gone the extra mile and actually had the character get impaled while slightly hunched over to give a sort of "Sewn" effect for lack of a better word. Disturbing, but awesome.

Unless he has something along the lines of a super exoskeleton and the red hot discolouration is only surface deep.

Mind you, perhaps with his superheated exterior he could save Iri's life by cauterizing her wounds... Assuming of course her own constitution has not already started to close them.
view 11th Aug 2012, 7:48 PM
edit delete reply

You're thinking about it a bit too deeply, but he does recover.
Vordreller (Guest) 11th Aug 2012, 6:29 PM
edit delete reply
For a moment there, I thought the blackish figure was going to wear the corpse of the whiteis figure. Then I noticed the impaling.
Lysander 2nd Jan 2013, 8:11 PM
edit delete reply

Hey, the night is still young. He could still fashion a skin-suit out of the ex-demigoddess. Maybe that's how they escaped the planet -- used her biometrics to gain access to her private space-yacht.
cattservant 13th Aug 2012, 1:51 AM
edit delete reply

Every time I get lost in The Woods, all the exciting dramatic action starts happening!
Post a Comment