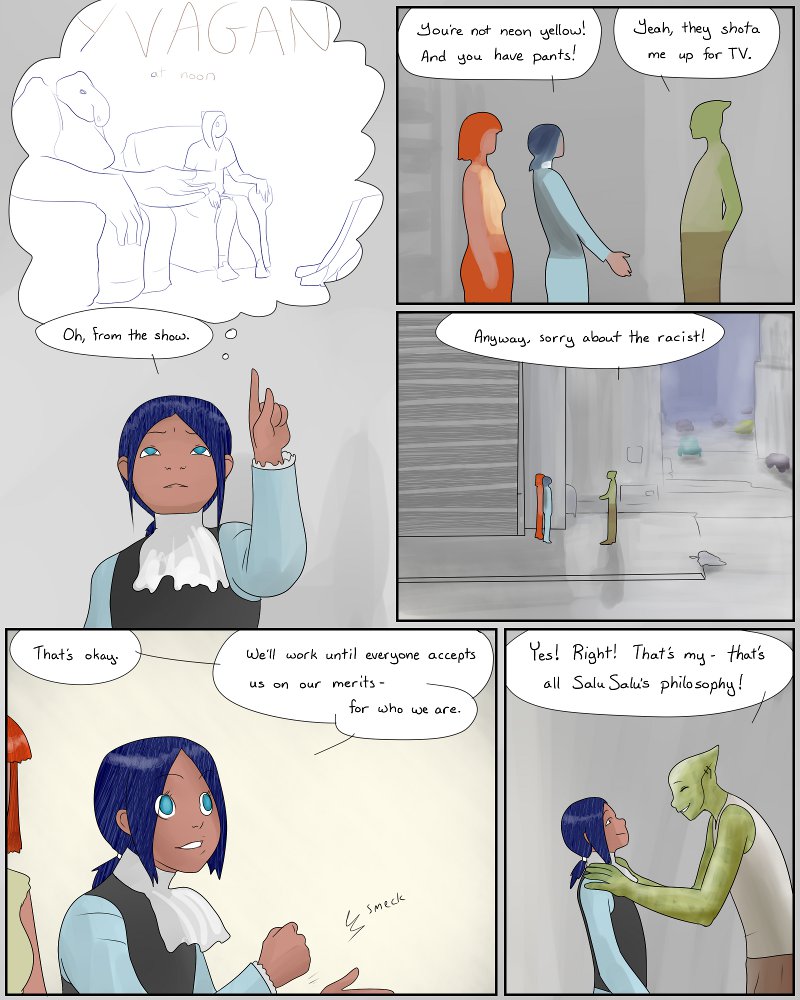 I really hate "talking head" comics, which is why the past few weeks have been really awful to write. They've really shown me my limits at pacing.

If you want to see what I mean, cruise on over to Go Get a Roomie: www.gogetaroomie.com

That comic is drawn by one of the best comic artists I've seen (Chloé C), and she struggles to put an amazing amount of personality into her art... but the script calls for talking heads.

In the end, no level of art can save a talking head strip. There has to be place, progression, physicality...

The weird thing is, I think she also writes it. That's weird.

Also, probably gonna miss tomorrow. Probably should have skipped today, too, given that I only had an hour to push the whole page out.
User comments:
cattservant 30th Apr 2013, 11:43 PM
edit delete reply

Next is a reflexive diplomat!

You also read GGAR ! :D
And dangit, the Salu Salu is still cute. :)

Edit :
Gotta say, I rather like panel 3. The persons in it is a bit "meh", but the background has surprisingly good depth to it. A mix of good perspective and creative use of littering and shadows really make it work. Me like. :)
view 30th Apr 2013, 11:58 PM
edit delete reply

I was really irritated by how it came out all around, but I don't have access to my tablet until late tomorrow.
Sheela 1st May 2013, 12:24 AM
edit delete reply

No, I used a tablet, but I only had an hour with it.

I use a Wacom Intuos, but that's not necessarily what I'd recommend these days. Back when I got it, it was the only decent tablet on the market.
Sheela 1st May 2013, 2:54 AM
edit delete reply

Ah, I know the feeling.
There may be smarter, newer tools out there, but you've gotten proficient with the one you have.

There are other options these days, for cheaper. Wacom provides undeniable quality, but they're pretty expensive.
Sheela 1st May 2013, 4:10 AM
edit delete reply

True enough, heck, you can even use an iPad as a drawing tablet.

No clue if you ever read other materials, but my roomie has been bugging me to read a web serial she's been fangasming over, so I finally gave it a shot and I have to say, it's really interesting; realistic character interaction is paramount, and it starts with a girl (Taylor) being bullied at school, turning to the outlet of being a super-heroine. I'm not explaining it very well, but it's really good. It IS really bloody long, though, over one point one million words currently and still growing. http://parahumans.wordpress.com/2011/06/11/1-1/ is the link, if you're interested. Who knows, maybe you can grab some of Wildbow's readers to come read your comics, too. :D I already got the roomie reading Spacepulp.
view 1st May 2013, 9:10 PM
edit delete reply

Oh my lawd. You used shota as a verb.

And I still think Solla Sollew when I see their name. Which is only the bet Dr. Seuss book always
Meh.Aloe 3rd May 2013, 4:38 PM
edit delete reply