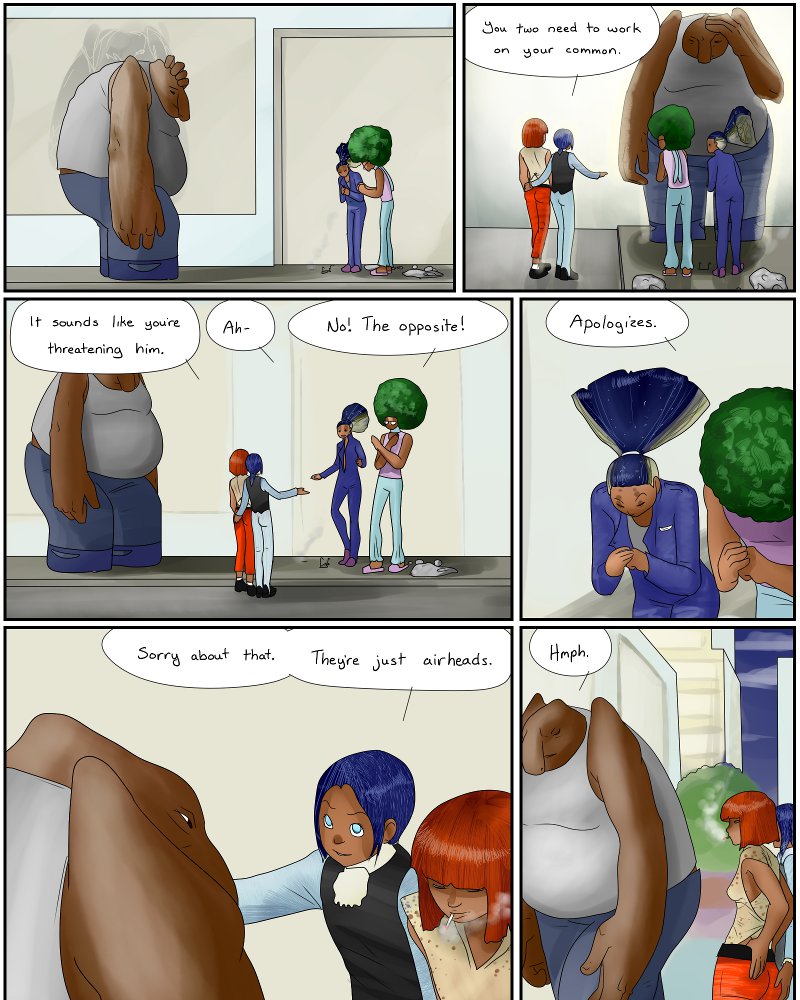 It's easy to get a bit in a rut when you do the same thing every day. Maybe I'll try experimenting a bit more.
User comments:
highlander55 21st Apr 2013, 10:15 PM
edit delete reply

Maybe need a short recess View? Those 2 definitely not used to being around other races. And Next sure has Iri's ass covered. (pun intended)
view 21st Apr 2013, 11:08 PM
edit delete reply

Dissatisfaction is somewhat of a default setting I think.
A wellspring of artistic motivation and plot enhancement!
Sheela 22nd Apr 2013, 2:51 AM
edit delete reply

I believe I have mentioned before that I think you need to do some wallpapers or fanarts for other comics that you like, where you don't speedpaint, but take your time about it.

It may be just the kind of diversion you need.
Besides, if you make fanart for someone else, you make someone happy. :)
view 22nd Apr 2013, 2:53 AM
edit delete reply

I'm not saying that you should make stuff like that every day ... the important bit is to get a bit of variation into your drawing/painting routines.

Or is it? It could be that Next is covering for them to just defuse the situation, and the PMs were planning to kick the big guy's butt. MYSTERY! DRAMA! I FORGOT TO TAKE MY PILLS!
Sheela 22nd Apr 2013, 5:13 PM
edit delete reply

*hides package behind her*

@view: A meditation on stagnant ruts;
This is a joke told by Dave Allen on one of his
shows (British program 'Dave Allen at Large').

A drunk leaves a bar and decides to take a shortcut through a
graveyard. It is raining heavily and very dark. The drunk
fails to see an open grave and falls into it. He tries to
climb out of it, but it is too deep and the rain has turned
the dirt to mud and has made it too slippery to climb. He
gives up after a while and decides to spend the night there.

A while later, another drunk leaves the same bar and decides
to take the same shortcut through the graveyard. He, too,
falls into that open grave and tries to climb out but the
mud is too slippery. The first drunk is still sitting there
and watches as the other drunk tries but fails to get out.

The first drunk stands up, taps the second drunk on the shoulder
and tells him, "You'll never get out!".

Did he slaughter the first drunk and fashsioned a rope from his intestines ?
Or did he just dig stair steps with the broken skull of his fellow drunkard ?
cattservant 22nd Apr 2013, 5:08 PM
edit delete reply