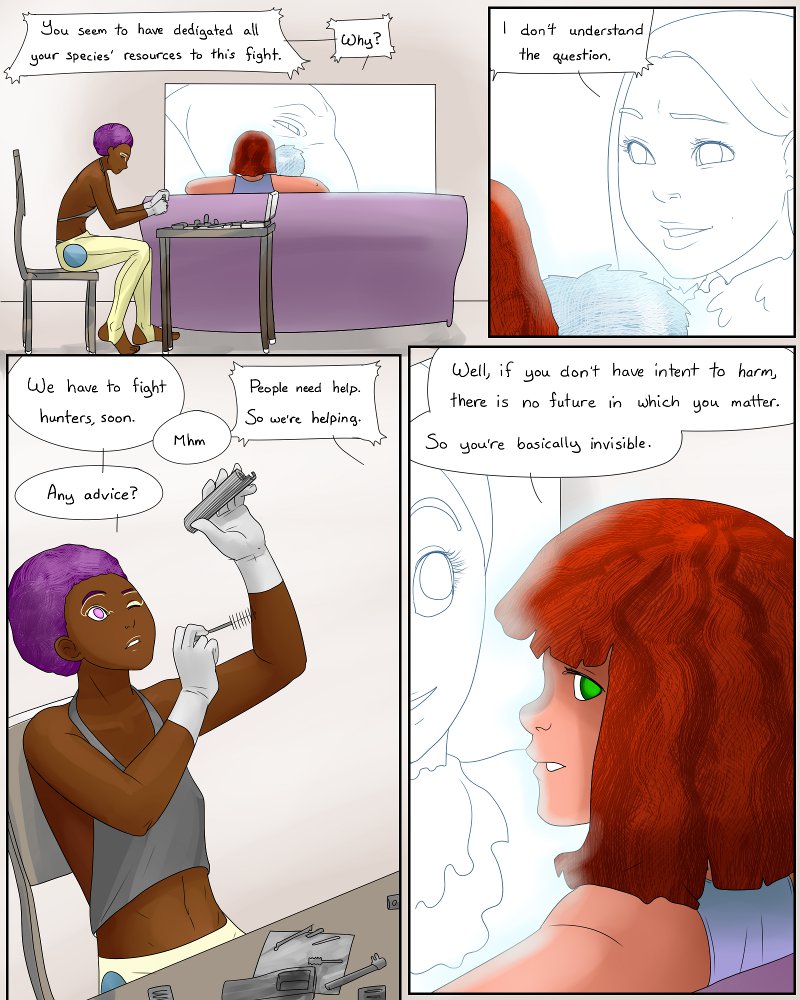 You have guessed the first line of the next page.
psianogen (Guest) 3rd Apr 2013, 11:55 PM
edit delete reply
I'm guessing inviting all the Hunters to the Poison Monkey version of a high fat fast food buffet won't be the answer. Damn, now I have Next dressed up as Colonel Sanders, Iri as Wendy, and Dragon as Ronald McDonald in my head.
view 4th Apr 2013, 12:02 AM
edit delete reply

Intent to harm is not all that affects the future. Reaction, blind or not, intent to help, simply interacting - all affect the future.

Now, fast and loud, slow and deep, spread to all the wind yet traveling together like a dust cloud...Intent to harm may be like colored smoke on a battlefield while the rest is just plain old smoke. Most definitely not invisible, but possibly so ever-present that it is dismissed.

I think it's more a case of time.
If it takes time to look trough all the possible future's, then looking trough the ones were you don't intent to harm them will be a waste of time, they'll just look in the one where you're trying to rip their head off.

Thus if you decide to do something else, they'll miss it because they only focused on one outcome ... this may also be why Iri had to think for things for so long .. to get at some of the less likely future that they won't expect, like ... they wouldn't consider a future where you're walking the dog but you might be able to twist it into something meaningful that they won't be able to counter until it's too late.

Soon we shall have predicted the entire comic!
At this rate it'll only take a few years.

Edit :
OHH .... they could try prodding Kax with soft pillows and sit him in the comfy chair!
Such exquisite torture! :)

Edit 2 :
I apologize for my morphing posts today, I keep finding grammar and spelling errors.

Well, hunters have perfectly good eyes and ears... and Ayata did change his future a fair amount.

But if he had actually been fighting with Iri, it's unlikely either of them would even have realized Ayata was nearby.
Sheela 4th Apr 2013, 5:12 AM
edit delete reply

Btw, I'm assuming that it's Next being interviews on the television ?
Tacroy (Guest) 4th Apr 2013, 4:16 AM
edit delete reply
Hmmm I wonder then

What do hunters see when their future is affected by a purely random event? Like say a decay counter or something like that?

Because you could imagine, say, a Schrodinger poison - some sort of nanotech cage that will release an instakill poison once the the isotope inside decays.

There's no deep event - you could calibrate one so that there's a low chance per month of instant death, otherwise the poison just hangs out in the blood stream.

I imagine the poisoning event would be hard to foresee as well, since nothing in particular happens - some dust falls off a stranger walking by, for instance. The poisoner doesn't even need to know that it will cause any harm; you could mask yourself behind a couple levels of intermediaries.

Such a thing would also be nearly impossible to detect once you have it, assuming hunters can't foresee radioactive decay events; the only way to tell would be a sort of consistent, low-grade random pruning of your potential futures (the ones you die in), kind of like the noise of all the futures in which you slip and fall and die just by chance.
Sheela 4th Apr 2013, 5:11 AM
edit delete reply

Well, psychers are by no means invulnerable, or infallable.

Also, View once laughed maniacalle when someone asked what the effective difference was on psychers and telepaths.

It was an eeevil laugh, I tell ya.
famicomaster2 21st Nov 2016, 4:36 AM
edit delete reply
I hate to be "That one guy," but did you mean dedicated in the first panel? Dedigated doesn't make sense.
Post a Comment