Is it time for a 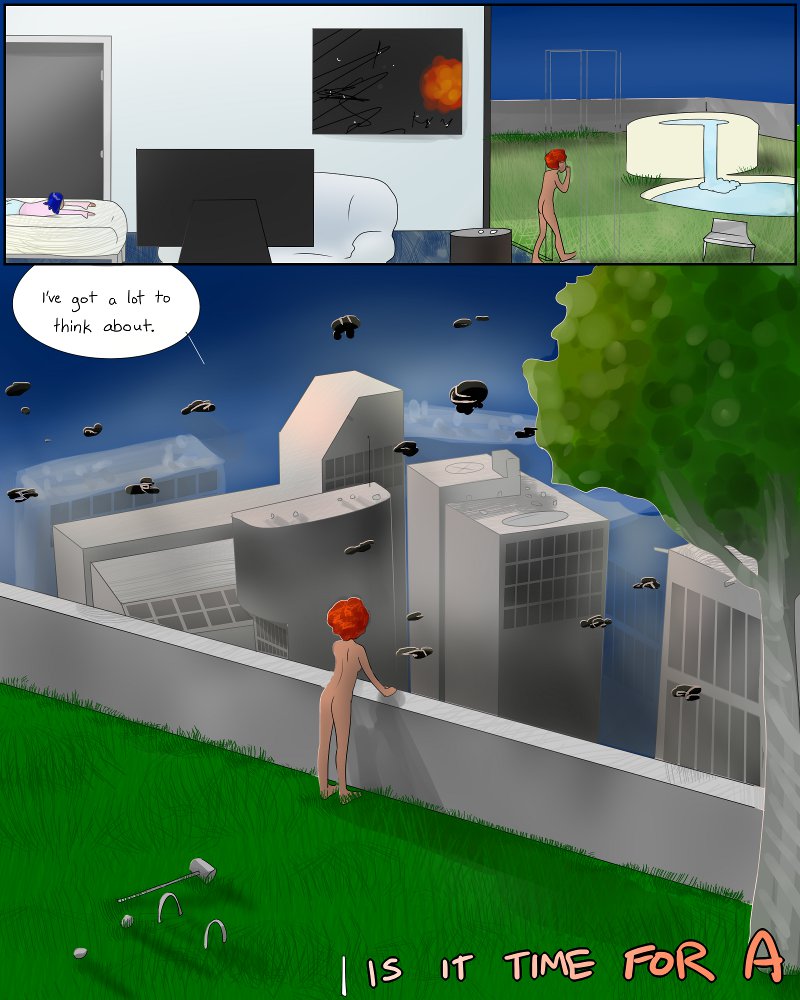 Damn. This page must have taken you a while. Looks good though. Iri seems to be missing her booty though =P
cattservant 20th Mar 2013, 10:48 PM
edit delete reply

I think I see a croquet set, or some space variation of it... Either way, I have a hard time imagining Iri playing it.
Meh.Aloe 21st Mar 2013, 1:32 AM
edit delete reply

It is time for a... CROQUET TOURNAMENT! The only way to defeat the Slavemaster is to challenge it to a croquet-off! Of course.
view 21st Mar 2013, 1:38 AM
edit delete reply

I have to admit, that WOULD make for an awesome and unexpected twist. :D
Sheela 21st Mar 2013, 5:25 PM
edit delete reply

Hmm ... I didn't notice the croquet stuff on the ground in the last frame the first time I read todays strip.

Oh, just had a lovely idea that involved using stargates as croquet gates, the slavemasters army at one end and Iri and a loooovely asteroid at the other end ... hammering along at silly speeds - And really, what would be the chance of it hitting squarely in the middle of the stargate that Iri is nearby ? :D

Heck, just imagine the prank call Iri could make for the slavemaster ?
"I'm sending an ambassador trough to negotiate your surrender."

Of all the human sports to catch on with the galaxy at large I never expected it be croquet or that Poison Monkeys enjoy playing it. How many other uniquely human things have caught on?
cattservant 21st Mar 2013, 7:28 AM
edit delete reply

It must be a case of parallel evolution and infinite possibility!
Sheela 21st Mar 2013, 5:22 PM
edit delete reply

I'm sure all sorts of human stuff is reveered across the galaxies.

Lets make some up !


-one planet worships humans ability to pollute their own planet and not give a fuck about it.
-Another has gone nuts about our punk rock culture, offcourse they have natural mohawks, so maybe it's not so strange.
-A species of kittens plan to dominate humans weakness for fluffy things, this is their ambassador!
-Planet of Nascar, 'nuff said.
Bellar 21st Mar 2013, 7:17 PM
edit delete reply

Maybe it's a half-lost cultural memory of some ancient war in which an omnicidal race of robots used weapons and bombs that look a lot like croquet equipment to try and wipe out much of the galaxy? :P
JasperWB 21st Mar 2013, 11:18 PM
edit delete reply