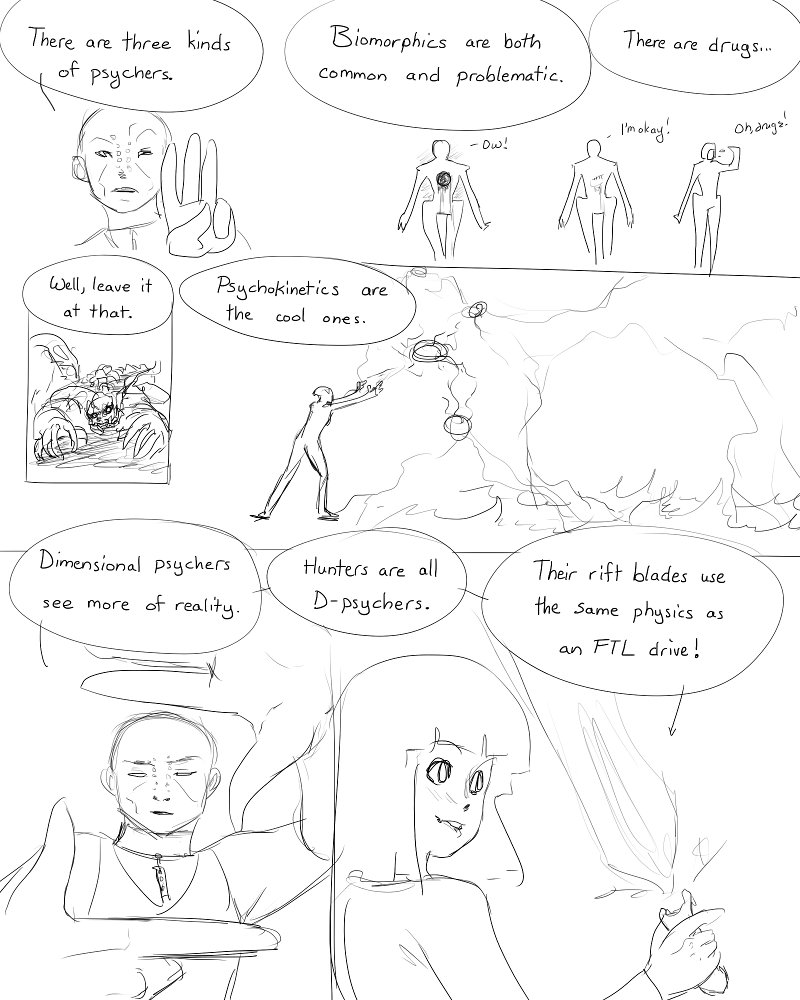 So the fire for the cigarettes and the blades are a dimensional rift, could you elaborate a bit more on it?
view 15th Mar 2013, 10:06 PM
edit delete reply

Just push tiny amount of atoms into other tiny amounts of atoms. That's what heat is.
Murdock (Guest) 15th Mar 2013, 10:34 PM
edit delete reply
Ah, so it's a superheated plasma torch of sorts?

When I heard the term "rift blade," my first thought was something like the edges of the gateways in the Wheel of Time books. A wormhole between point A and point B with an effectively infinitely sharp edge. Or the Vorpal swords from glasshouse, I suppose.
view 15th Mar 2013, 10:41 PM
edit delete reply

The rift blade moves particles that pass across it a tiny amount to one side. This does generate heat, but it's not a plasma blade.
Murdock (Guest) 15th Mar 2013, 10:50 PM
edit delete reply
Ooooooh! So it moves them enough to separate them from their neighbors, creating a molecular scale rift.

... Iri looks kinda turned on in that last panel.

These pages are just here for all the people who like to whine that some piece of space magic isn't consistent.
Sheela 16th Mar 2013, 2:46 AM
edit delete reply

And me, until I puzzle it out and/or View gives an explanation. :D *has been on hiatus with a cold :< but is back and enjoying the plethora of new strips in the meantime! YAY!*

So View, I'm gonna throw this out here, don't need to affirm anything, but I think I got this sorta figured out at least to some point: NOTE THIS IS ENTIRELY CONJECTURE AND WILD MASS GUESSING BASED ON WHAT I'VE READ AND HOW MY BRAIN WORKS! Take it with a grain of salt, anyone else reading this. @_@;

And if you want me to take it down, toss it to you in a PM, just say the word and I'll do so; Not entirely sure if this sorta thing is frowned on, but I sorta remember some guesses of the sort from NMtG... Anyways, onto the post.

Unity is some sort of being or beings (The floating skull guys, though those seem more likely to be avatars- psychic or holographic? Unsure. Assuming the latter, because the flare zapped it, so it's at least partially technological) who can mind-slave anything that shares genomes within the galactic tree of life. Whether to just increase their power base or to 'bring everything under their control for harmony and peace in the universe (yeah right, since when is that ever the true motive?)' or something of the sort, they're taking over the minds of various species aiming to enslave the entirety of the known galaxy. Anything that gets in their way, they assassinate with those toxin darts that are otherwise guarenteed to kill anyone.

I'm gonna guess that psykers are especially weak to their machinations, because they're a unique type of psyker/have a unique strain of a psyker power /affect psykers through technomantic means that allows them to do this in some way, as demonstrated by the lines of Kax before the floating skull rebooted; or it could be of a completely technorganic origin instead of a psyker power or a technomantic power, but that would only hold if most hunters are at least partially cybernetic; This seems to possibly be the case since it's been mentioned that Kax is a cyborg, and that most of the others with him are as well.

I'm also guessing that either the Poison Monkeys were specifically created as a sort of anti-Unity weapon, or are a naturally occuring anti-Unity race- perhaps due to the radioactivity inherant in their bodies (All those rampant alpha particles would play havoc with most forms of cybernetics, I'd think) or something within their genetic code; It could even be that they imbibe radioactive substances to corrode whatever it is that Unity utilizes in beings to enslave them.

And if any of this (I highly doubt it, your stories are much better than anything I can cook up) inspires any ideas, feel free to use any of the above material. I doubt I'm anywhere near the actual plot you got cookin', but there's my WMG.
view 16th Mar 2013, 9:05 PM
edit delete reply

Eh, some right, some wrong. All I can say for sure is that I'm not taking anything from it, so anything that matches was correct.
SpaceMonkey 16th Mar 2013, 4:34 PM
edit delete reply

I work so hard restraining myself from asking pedantic questions about your universe's physics allll the time. I don't have so much problem with other comics....

My only thought is it's because you flesh out your worlds to the point that peripheral details are actually filled in pretty consistently in most cases. which only encourages us to ask for all your juicy world-building exposition :P

Because you really do get hammered with questions on that stuff more than most authors I'm aware of.
Sheela 16th Mar 2013, 8:59 PM
edit delete reply

Ooooo, I do love a good info dump now and then. 'Specially in time for the weekend when I have a chance to digest it!
Post a Comment