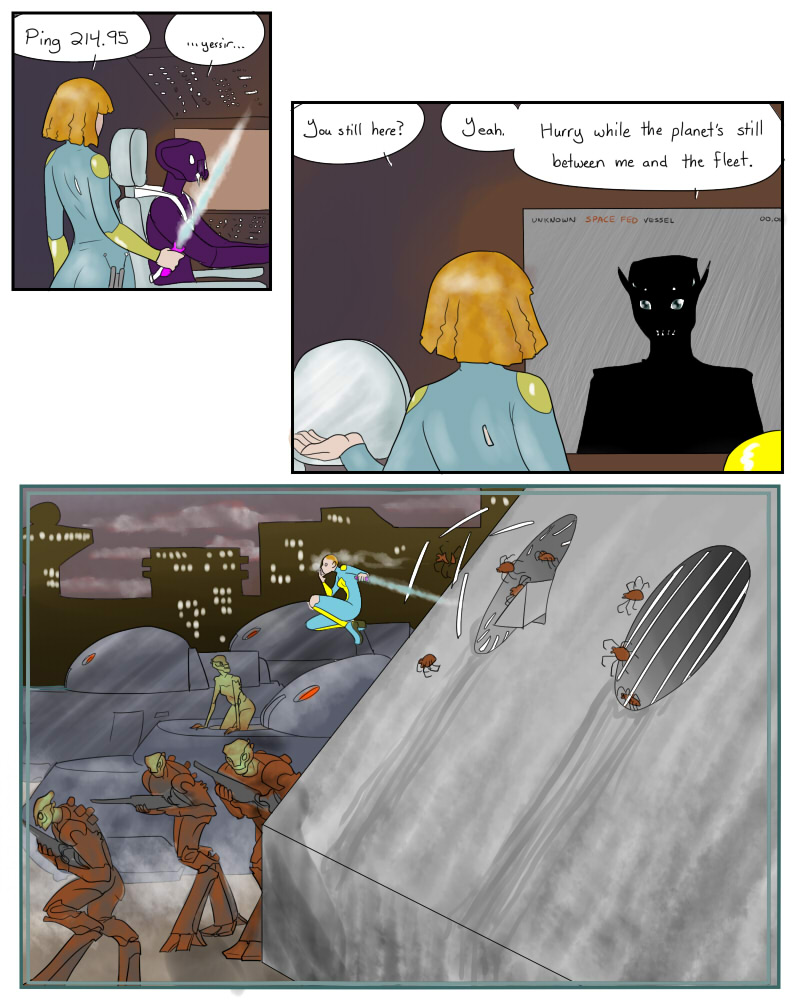 I don't think it is. I can see her cutting her hair off and finding smokes, but not jumping to a planet. In a building.
Centcomm 3rd Aug 2012, 11:08 PM
edit delete reply

And what action scene would be complete without Space Roaches? (!)

Lizardy aliens are cool. I'm interested in the guy from the second panel myself.
view 4th Aug 2012, 1:02 AM
edit delete reply

Damn! Those are some big head-lice. No wonder she trimmed her hair.

That last panel is a kick-ass little action shot. I am curious to see what Iri looks like up close with short hair.
Sheela 4th Aug 2012, 8:14 AM
edit delete reply

I think Swordysword is not pink, but rather fuchsia.
pensivedragon 4th Aug 2012, 4:18 AM
edit delete reply

Heh, I am getting some Teenage mutant ninja turtle vibes from this page, specifically leonardo. A mutant jumping out of the sewers with a sword to attack a bunch of drone soldiers, while wearing blue. Just need to switch out the smokes for a pizza slice :D Hell, this is a flashback so she might even be a teen at this point.

'Course, part of that depends on whether or not Iri can be classified as a mutant. She comes from a heavily irradiated planet, so she could be one...?
CyberSkull 4th Aug 2012, 3:42 PM
edit delete reply

Do poison monkeys need whitestix to do action sequences or is the rule of cool just a way of life for them?
cattservant 4th Aug 2012, 6:09 PM
edit delete reply

I bet they need the radioactive sulphur isotopes to power up. But rule of cool is most certainly a big part of Ms. Iridium Lake's persona!
Paul Goodman 4th Aug 2012, 10:22 PM
edit delete reply

So the bottom was a flashback? I don't think I would have gotten that if it hadn't been the name of it. I mean, I would have found it odd that she cut her hair and ended up slicing her way out of a bug prison but I'm not sure if this is the best setup for a flashback. Maybe if it was grey scaled?
pensivedragon 5th Aug 2012, 3:24 AM
edit delete reply

The unique border around the panel and abrupt shift in location and character design was enough to twig me. Even before I noticed the title of the page. But if it had ONLY been the border (as in, she was still on what could be the ship, and had her full hair), I would admit it might have been too subtle. At least to instantly twig at it being a flash back. I would then have thought it was just a live security feed, or something. Even desaturation would not automatically twig it to being a flash back. The only really foolproof ways I can think of are:
1) thought bubbles. If this is Iri remembering something you could have the bubbles coming out of her head and surrounding the panel.
2) Naration/captions . "10 years ago" type stuff. Or you could make it archived footage, and have the screen text indicate it as being old. such as having the screen show the current date, as well as the date the footage was taken or some such.
3) Exposition. Have one or more characters looking at a screen talking bout the footage, and either have the screen big enough to see what it going on, or have a panel with a close up shot of the screen. Or just have some characters talking about the memory as a lead in to a flashback.

Now, I am not suggesting that any of this is needed. In fact, I think that as it stands it works fine. I just thought of these things as I was commenting and decided to throw them out there.
cattservant 5th Aug 2012, 7:46 AM
edit delete reply

Then there's the author's known tendency for making meta comments in the ANs. But that wouldn't help new readers.
I think the question is why view needed "to put an action scene right...HERE."
pensivedragon 5th Aug 2012, 3:40 PM
edit delete reply

Well, I am gonna guess it has something to do with the shadowy figure on the screen. Perhaps how or why she hooked up with the federation? Or perhaps why she does not like the Unity much. Or why they hate her.

So many possibilities. I am curious to see where this goes. Mind you, I am always curious because View is so damn good at surprising me. Lol.

Of course, it might also just be that View just REALLY wanted an excuse to have Iri do another epic action pose... :D
cattservant 5th Aug 2012, 7:14 PM
edit delete reply