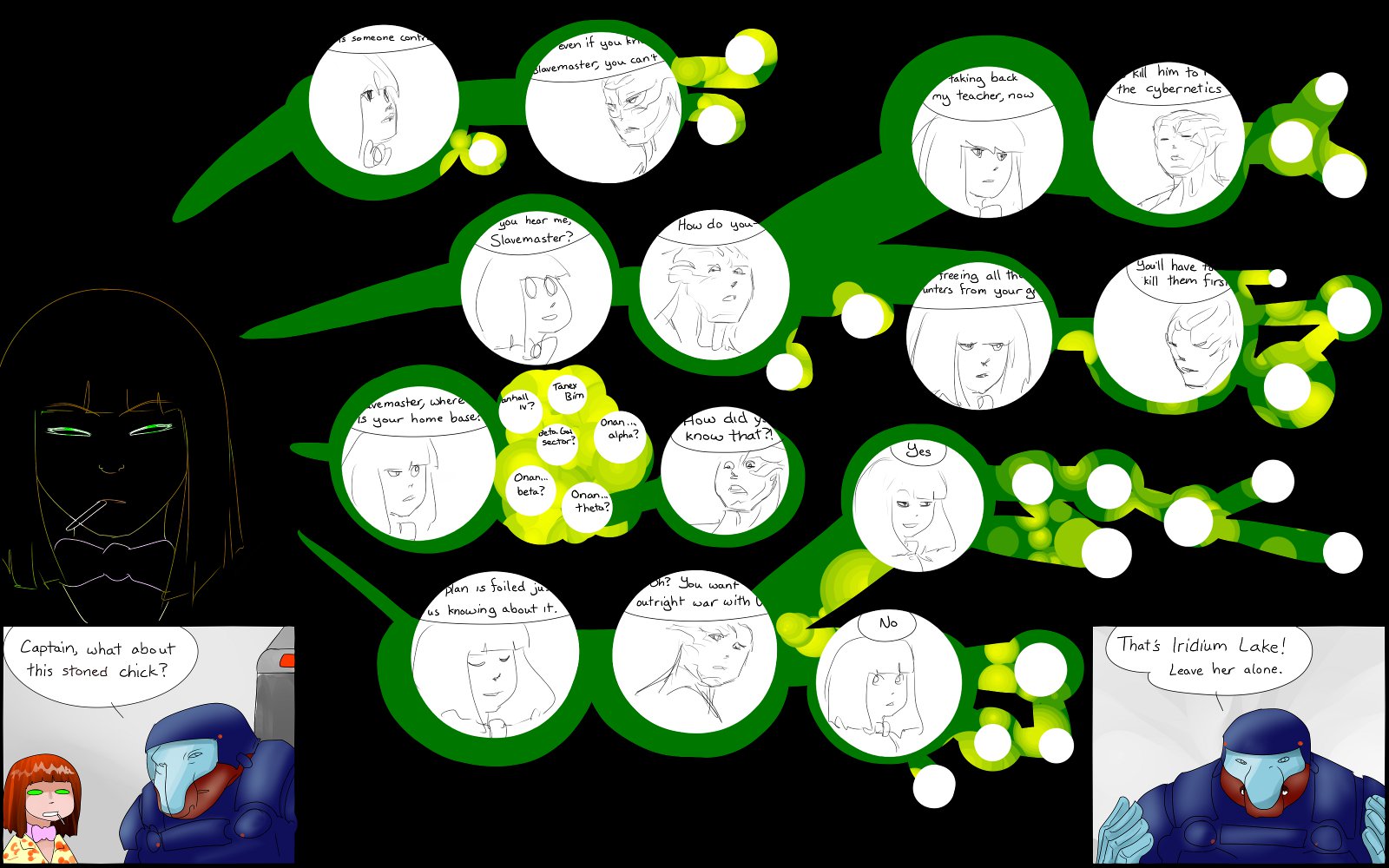 Showing the different paths and all that could come of each given intersection, learning things without even having to go down that path (like the home base being on Onan Theta).

Just because something isn't elegant, doesn't mean it's not effective.

You're looking at her foresight ability.

What we can glean from this, is that there is an entity she call "slavemaster" and that this slavemaster has somehow taken over the other hunters, Kax included, and that they have their homebase on Onan Theta - Also it's somehow related to their cybernetics and that it would probably kill them if she tried to "free" them from the slavemasters control.

Also, she's at least considering outright war with "them", though she's still on the fence about it.

Offcourse, questioning like this, is at least partly faulty in the sense that you can only get the answers to questions you can think of, so it will be kinda biased. Even so, it could be very useful, though it does leave her a bit .. vulnerable .. and goofy. :)
Meh.Aloe 14th Mar 2013, 3:22 AM
edit delete reply

Ooh, thank you! Only thanks to your comment did I fully grasp how the bubbles work. :P We know it's Onan Theta because that's the bubble that makes Kax go "HOW DID YOU KNOW THAT?" D:<

The Slavemaster gave the name himself, btw. It's on the first timeline explored.

Also, I did theorize this kind of interrogation before (not in this specific situation), and the scary part is that in another situation, it can be taken to a whole higher level, since she could just as well torture people in some possible futures to extort information. Basically, humane torture, since she's not really torturing people in reality.
Zaranthan (Guest) 14th Mar 2013, 2:10 PM
edit delete reply
Wouldn't change the fact that torture doesn't work. Either you could have gotten the information faster with better interrogation techniques, or they're so hard-up that they're just going to lie to you anyway.
Meh.Aloe 16th Mar 2013, 2:00 PM
edit delete reply

Or they genuinely don't have the information you want, and just make something up out of thin air to make you stop. And then you act on this made-up intel and are screwed.
view 16th Mar 2013, 2:55 PM
edit delete reply

It's much easier to casually chat with someone a million times and pull details out like that. When someone doesn't have their defenses up, it's much easier to get information out of them.
pensivedragon 13th Mar 2013, 11:42 PM
edit delete reply

Heh. Am I right in assuming that the sort of 'neon outline' version of Iri is her mental picture of herself? Cause the difference between how she THINKS she looks right now, and her actual expression, is hilarious.
view 13th Mar 2013, 11:47 PM
edit delete reply

Yeah, I liked that idea, so I went with it.
Murdock (Guest) 13th Mar 2013, 11:43 PM
edit delete reply
Wow, she's REALLY cheating at infogathering there. Exploring possible futures, then using information from those to explore NEW possible futures.

I know right? I can only think of one, off the top of my head, and it was a sadly poor movie starring Nicolas Cage.
Sheela 13th Mar 2013, 11:53 PM
edit delete reply

ugh .. Nicholas Cage has endless potential as the creepy daddy that fancies his daughters girlfriends, but doesn't have a heroic streak in him at all .. and what roles do he go for ?

... *sigh* ...
Murdock (Guest) 13th Mar 2013, 11:59 PM
edit delete reply
There's one book series, the Milkweed Triptypch, where a precog does some terrifying things. Pretty much the first two books in the series involves everyone dancing to her strings.
Meh.Aloe 14th Mar 2013, 3:25 AM
edit delete reply

Iri can interrogate people just by using her precognition to see each possible answer to each possible question she might ask! :P That is weird and awesome...
cattservant 13th Mar 2013, 11:52 PM
edit delete reply

Soooo... We now know that Iri seeing the future is not an 'instant' thing. As she explores all the possible future streams, enough time passes for people to notice. Though still much faster than what it would take to actually experience each event in reality. Sort of like skimming through an article?

Also, I am wondering if this particular talent; the ability to not only see the future but test out multiple potential outcomes, is a talent unique to Iri.

Or do the lengths of the various possible timelines have little to do with their actual potential temporal length?
view 14th Mar 2013, 12:44 AM
edit delete reply

That's good, but why?
WhiteAier (Guest) 14th Mar 2013, 4:06 AM
edit delete reply
The simple impression of colour that spreads across realities and showing their connection and volume. The deep tones resonating within the viewer and Iri alike; showing her the fractions of the future that are important. As the green slips into yellow, the details disappear as does their importance.

I just really like this visual representation of the future you have showcased for us. Since it shows itself in many different ways. Not just through the narrative.
view 14th Mar 2013, 4:08 AM
edit delete reply

Somewhere an immensely surprised view is going: "Whoa! I did all that? I'm better at this color stuff than I thought!"
view 14th Mar 2013, 10:33 PM
edit delete reply

This is awesome. I was going to say what other people here have said but...they already said it. So...it's just awesome!!
Runesavaan 14th Mar 2013, 5:31 AM
edit delete reply

Seeing the future looks confusing. She must have somewhat of a hard time sifting through it all.
pkrankow 14th Mar 2013, 3:01 PM
edit delete reply

I have gotta say that is quite possibly one of the sexiest faces I've ever seen Iri make.

Also, interesting thought (well it interested me)... if Iri were empathic as well as precognitive, would the panels maybe show in different colors for emotions? I dunno, for some reason I was looking at the layout again and somehow that thought popped into my head, the characters flickering with multicolored auras that changed with their various reactions, like Slavemaster lighting up some weird purple color to display his shock with "How did you know that?!"

So many awesome expressions on this page -- I am tempted to crop them all into avatars. :P
steveha 17th Jan 2018, 9:41 AM
edit delete reply

I've never seen a story where a precog did this sort of thing, but it's perfect.

And, View: I didn't need to read the comments, the way you set this up it was quite clear. Bravo!
Post a Comment