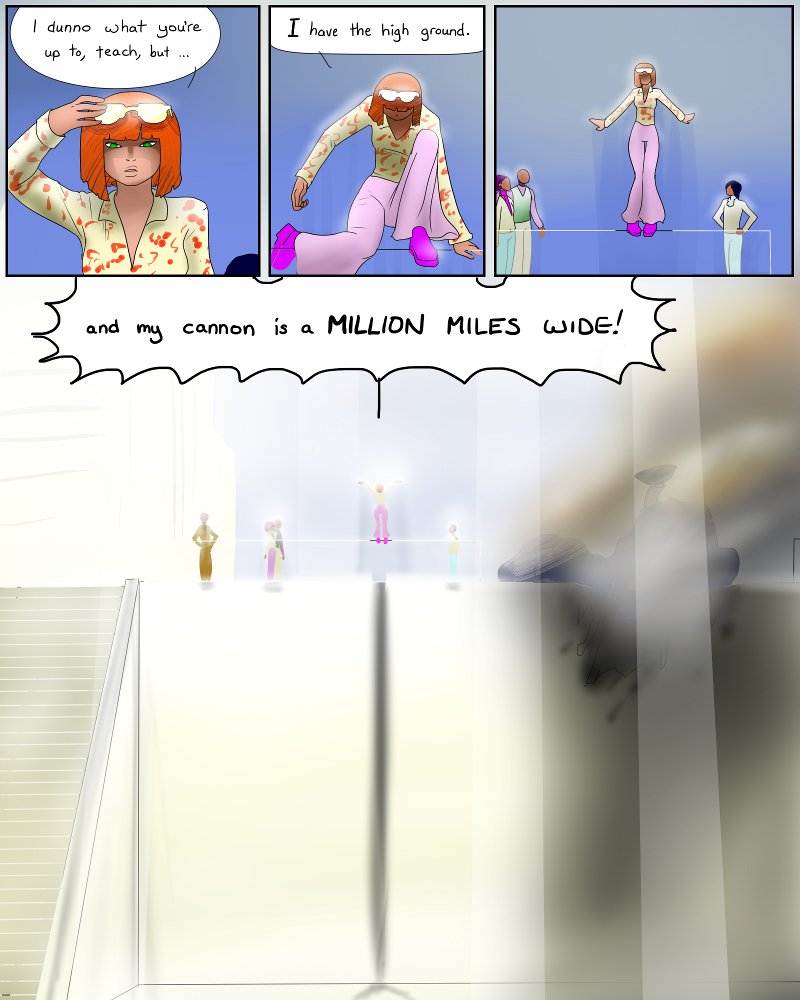 Kinda obvious, had to ask oneself what Iri would have to counter Kax's orbital cannon, offcourse - fancy tech like that would be sensitive to the solar flares .. and then the follow up is that the ships might be quite sensitive to it too.

D: That is a shocking twist. He isn't also her father, is he? :P

Well, either that or she don't care about Ayata's people and she's just doing it to be a thorn in unity's side.

War can be funny like that, or as the old saying goes "War makes for strange bedfellows."
Nightsky 8th Mar 2013, 9:48 PM
edit delete reply

All surviving fans of Iri will now have the best story to tell in the history of fandoms, doubly so if any of them are close enough to see this in person.

"So it turns out Iridium Lake is even more of a badass in real life than in her films..."

Because... either she has a rather good sense of the dramatic... or it's just a Poison Monkey trait in general - somewhat in keeping with their sense of fashion. Either way I can see why she makes exceptional movie material even allowing them to use her exact recorded lines.
view 8th Mar 2013, 11:03 PM
edit delete reply

Yeah. Actually, there's a bunch written, but RPG manuals are much larger than you might think.
Bellar 9th Mar 2013, 1:31 PM
edit delete reply

Oh, I can imagine just how large they can be. They may as well call them RPG tomes.
VlRGlL 9th Mar 2013, 1:19 AM
edit delete reply

Surely Kax would have foreseen this or at least had done 30 seconds of research on this planet or at least had counter measures for this sort of thing
view 9th Mar 2013, 1:30 AM
edit delete reply

Not to defend a pulpy plot point, but no, he probably wouldn't have. He's basically a commando: he relies on C&C for his information.

This is made worse because he's a hunter. Hunters usually rely almost 100% on their foresight.
VlRGlL 9th Mar 2013, 1:40 AM
edit delete reply

Someone fucked up big time down the line. Also is his foresight being clouded like Iri?
view 9th Mar 2013, 1:42 AM
edit delete reply

Sounds like C&C done fucked up big time, to not equip the ships, or at least prepare them for the flares.
This is gonna hurt!
GeekPrime 25th Jul 2013, 10:13 AM
edit delete reply

So, to get things a bit straight. Iri realized that Kax (it had to be someone in space, as the other psycher said 'he was good at scanning') was casting shadows, so, knowing that Kax isn't really that good with shadows, and that hunters in general rely on their foresight, she just enlarged the shadows as much as she could, while having using her proper, normal knowledge of the planet to make it so that the solar flares would fuck him up at an appropriate time, knowing that Kax, while weak to probability shadoes, having cannons on his side and being pretty much built like a tank, would go after her anyway.
view 9th Mar 2013, 3:21 PM
edit delete reply

Edit :
I wonder if there's a Chekov's Pacemaker too ?
What if Kax had some sort of implant that he needed to survive?
pensivedragon 9th Mar 2013, 2:10 AM
edit delete reply

Pink... Bell-bottoms and loafers? How does she manage to still pull off being a bad ass in that outfit? But... somehow she does :)
SpaceMonkey 9th Mar 2013, 4:01 AM
edit delete reply

Could be a focus for their power too.

Ie. they might be able to make a Swordy Sword "blade" sprout out from their bare hands, but it would be weak without their focus.
Meh.Aloe 9th Mar 2013, 3:55 AM
edit delete reply

I just now realised the title of this page is "Chekhov's Sun."

I missed that too!
I do not know if that qualifies as a great or horrible pun, but I love it either way.
Sheela 9th Mar 2013, 5:54 AM
edit delete reply

I like that she takes a full pause to stand up on the rail for dramatic effect! Hah
G-Rock 9th Mar 2013, 8:30 AM
edit delete reply