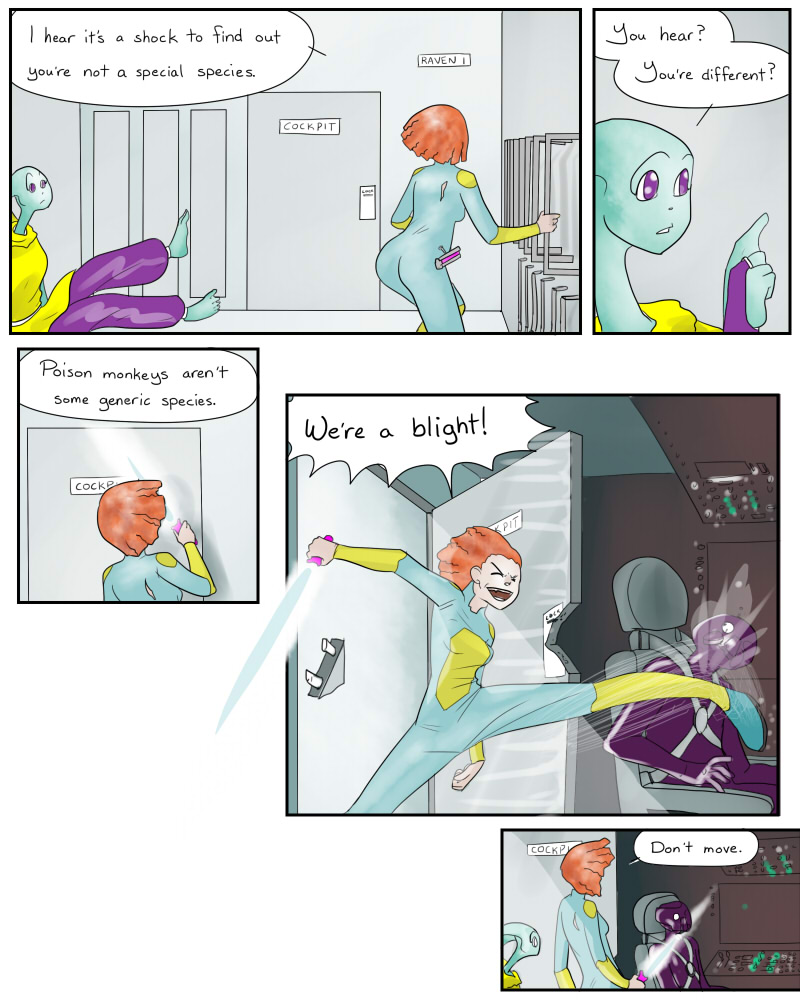 Nice entrance. Um i'm having a hard time understanding panel 2, why does she say you hear?
*wait nevermind i've got it.
So... blight of the galaxy huh. Are poison monkeys the farthest or closest in the genetic line to the "ancestors"? If that's not the idea then nevermind.
view 1st Aug 2012, 11:05 PM
edit delete reply

Their blightiness has little to do with their descendency and mostly to do with them being hairy, radioactive barbarians.
ravenor78 1st Aug 2012, 11:32 PM
edit delete reply

It was just a thought, i didn't mean it to be linked to blightiness. And by hairy you mean there's more? Or just the messy visible hair.
view 1st Aug 2012, 11:36 PM
edit delete reply

RE: Hairy and radioactive; And their tendency not to stay outside the gates!
pensivedragon 1st Aug 2012, 11:18 PM
edit delete reply

HA! Yes! Now that is an entrance!

In a special not-pink holster. I should probably have remembered to draw it in the later panels.
pensivedragon 1st Aug 2012, 11:54 PM
edit delete reply

Well, strictly speaking, it was placed at the back of her hip, and could be hidden by her body in the second last panel. And hidden either below panel, or by her wrist in the last. So perspective wise it is not wrong, just slightly confusing :)

Hmmmm, so her powers allow her access to REAL items then. She did not create that blade simply with her mind if she already had a custom holster for it. Unless she has both a real sword AND can create them with her mind? I wonder how it works, she did not appear to reach through a portal or gate in the swords first appearance. Rather the sword materialized in her hand. So, not access to a pocket dimension. perhaps the sword is made up of nanites that can dissemble and reassemble at her command? and when broken up can hide around her person to avoid detection? or maybe Selective teleportation, she is somehow able to summon specific objects to her through some sort of de-materialization process?

Maybe the matter could be better described with a philosophical explanation. Say the sword is at home in Iri's hand and is always striving to return there. Her power could be said to be guiding and assisting Swordysword to do so.
pensivedragon 2nd Aug 2012, 7:38 AM
edit delete reply

I like the sound of that. Mind you, that only works if the sword is the only thing that happens with. However, if there are other items she can summon, I really hope she gets better at naming them :D
cattservant 2nd Aug 2012, 8:46 AM
edit delete reply

But she has a special relationship with Swordysword!*

Aye, the relationship is special allright ... Swordy-sword is a sexy beast !
Heck, the hilt has probably pleasured her many times when she was lonely.
cattservant 2nd Aug 2012, 10:29 AM
edit delete reply

Swordysword probably has a vibrate setting and probably doesn't have to be sharp all the time either...
Sheela 2nd Aug 2012, 10:44 AM
edit delete reply

Hmm. Swordy sword sounds like a very important character now. I really hope we get to see it and Iri "interact" at some point.
cattservant 2nd Aug 2012, 4:14 PM
edit delete reply

How about a picture of Iri and Swordysword lying next to each other in bed, smoking whitestixs?
misterpointy 1st Aug 2012, 11:19 PM
edit delete reply

"We're the Poison Monkeys and this is our song 'Radioactive CIGARETTE!'"
Sheela 2nd Aug 2012, 3:29 AM
edit delete reply

"Glowing eyes in the dark" sounds kinda evil and scary actually, this may be part of why the other species is a bit apprechiative of poison monkeys.
cattservant 2nd Aug 2012, 12:15 AM
edit delete reply

She embraces the role thrust upon her species by the Alopecic Elite!
JasperWB 2nd Aug 2012, 12:32 AM
edit delete reply

Panel four is awesome. The face, the sword jutting out of the page, kicking. I approve.

I'm betting there aren't any other sentient species with hair in this universe? And unlike most sci fi universes that ignore it, here it is seen as making these monkeys....well monkeys. Hair is seen as a bad trait of unevolved species.
view 2nd Aug 2012, 12:34 AM
edit delete reply

It still does sound like something other species would view as a "unevolved" trait, as Jasper says.

I reckon some racism/specicism might be going on here, along with a healthy dose of "OMG, radioactive barbarians at our gates!" on top of that.

Knocking you head effectively against The Limits is bound to produce the occasional headache! Just file it under MF.*

Oh yes, Yagh's have lots of limits ... they even have limit breaks !!

Y'know, when View throws his tablet out the window, while yelling yagh, it'll make a break for it, or even break itself!
CyberSkull 2nd Aug 2012, 8:23 AM
edit delete reply

So is that beam sword the kind that if she drops it, it will just keep cutting down the path of gravity towards an inevitable hull breach or worse?
Godongith 2nd Aug 2012, 2:55 PM
edit delete reply

Hopefully it only works in her hand. I don't see any on/off switch.
cattservant 2nd Aug 2012, 8:26 AM
edit delete reply

@view: Could Ms. Lake's boots be described as kinetic assisted footwear?* I notice the foot portion is turning blue on impact. Also the sole was blue while interacting with a force field. (Comic 11, panel 4)

It's aight. I'm out of useful and witty things to say anyway. I gotta recharge.

-I just realized this may not have translated well at all, but it was a joke. See it plays like what I say matters and like I'm an integral part of things. It's self depreciation humor, not me making one of the mother of all asshole, narcissistic comments. Ah, to be paralyzingly neurotic.-
cattservant 3rd Aug 2012, 3:10 AM
edit delete reply

Sorry I'm not replying to all your comments, the comment tracking is a bit untidy.
merle 13th Feb 2014, 4:50 PM
edit delete reply

No worries at all! I just felt bummed out that I'd missed the chance to comment on most of the comic (since I read almost all of it in one long archive binge up to almost the final chapter), so I'm resolving that on the re-read. :)
Post a Comment