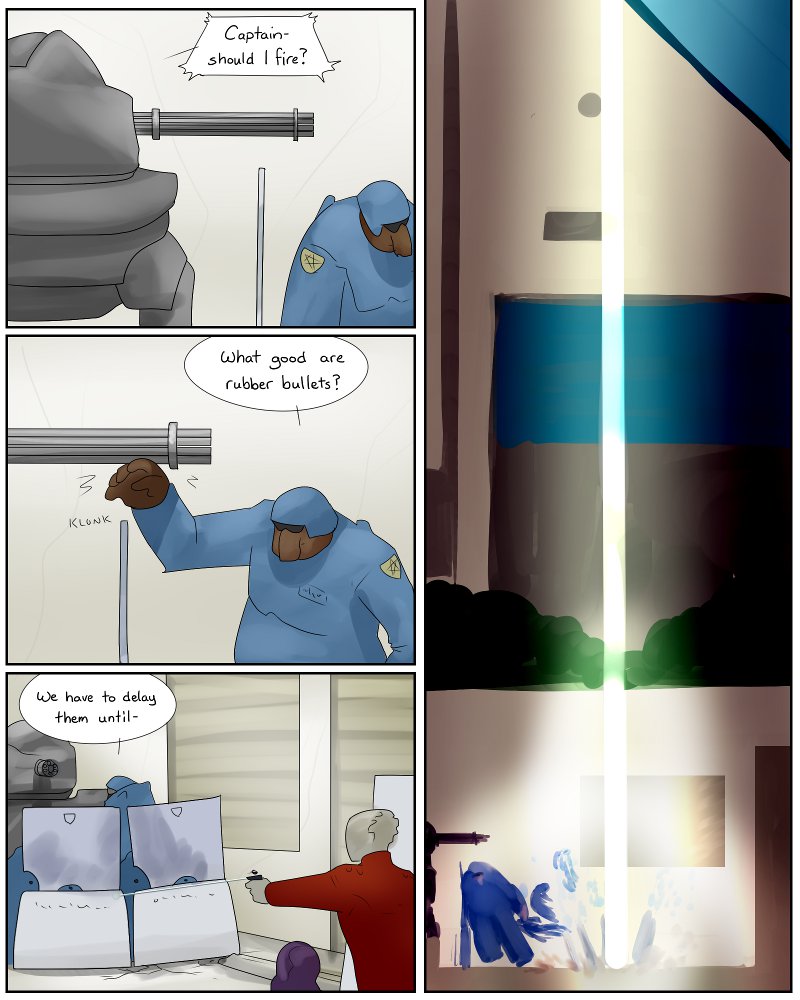 Why rubber bullets?
You would think they would of brought something stronger.
view 1st Mar 2013, 11:50 PM
edit delete reply

Because it's a planet full of 800 pound elephant people, and they tend to ignore the first few polite little rubber bullets?
Meh.Aloe 2nd Mar 2013, 5:44 AM
edit delete reply

At least I got the laser designator part right.

Nah, iridium or uranium round, even a single kilogram dumb round would level the block. I used to run grim math scenarios for science projects in middle and high school. My favorite was on quantifications of WWII casualty statistics (body mass and volume killed, average characteristics, statistical characteristics associated with casualty, etc.) followed by weaponized kinetic rounds and natural disasters. Scared the crap out of the teachers, but my presentations were always the most popular, which also independently scared the teachers. Math to follow.

A one kilogram dumb round, ceramic jacket, fin stabilized, length maybe ten to twelve times the radius, with assisted thrust to bring it up to around 20 km/s which isn't much(<i>controlled</i> reentry for the space shuttle started at 7.7 km/s at a 42 degree angle) coming in at a ninety degree angle (straight down) would leave something like a 100 meter wide by 40 meter deep crater depending on the rock. There would be a 90 foot fireball and thermal radiation deadly out to about 500 feet, an optical flash about fifteen times as bright as the sun. Even at half a mile, you'd have a 90 mph wind gust, not to mention the radiation pulse off the impact would fry anyone inside maybe half a mile(assuming the round punched into the ground which would absorb most of the radiation which is best case scenario). So, no, definitely not kinetic.
Running Joke (Guest) 2nd Mar 2013, 11:04 AM
edit delete reply
Reminds me of some info from my other favorite sci-fi comic. Along the lines of "even a tinfoil cone is a deadly weapon at relativistic speeds."
AngelofPity 2nd Mar 2013, 7:58 AM
edit delete reply

My actual guess, very very strong x-ray laser. Ionization, barometric effects, localized thermal as an insanely high gradient. Basically a lightning strike and laser strike in one with higher efficiency than optical laser. Plus, angle has less impact on effect other than punching through more atmosphere so it's more practical that way as well.
And it explains the ionization glow, which sure as heck isn't going to be Cherenkov radiation or this would be a different kind of story entirely.

Damn. I wish you had been in my math class back in high school. I might have actually managed to pass it, if I could have seen how interesting it could be under the right circumstances. :)
view 2nd Mar 2013, 1:36 PM
edit delete reply

It's also why I tried very hard to establish the city as yellow, so the blue would be a clear contrast.
Sheela 2nd Mar 2013, 5:39 PM
edit delete reply

As for the blue light, it's something that happens in a lot of sci-fi and even in real life too !
JasperWB 2nd Mar 2013, 7:06 PM
edit delete reply

Satellite Beam
Breauregard 3rd Mar 2013, 4:25 AM
edit delete reply
After about a week of reading, I've finally caught up, HOORAY!

That tank looks very ghost in the shelly if you don't mind me pointing out
view 3rd Mar 2013, 4:38 AM
edit delete reply