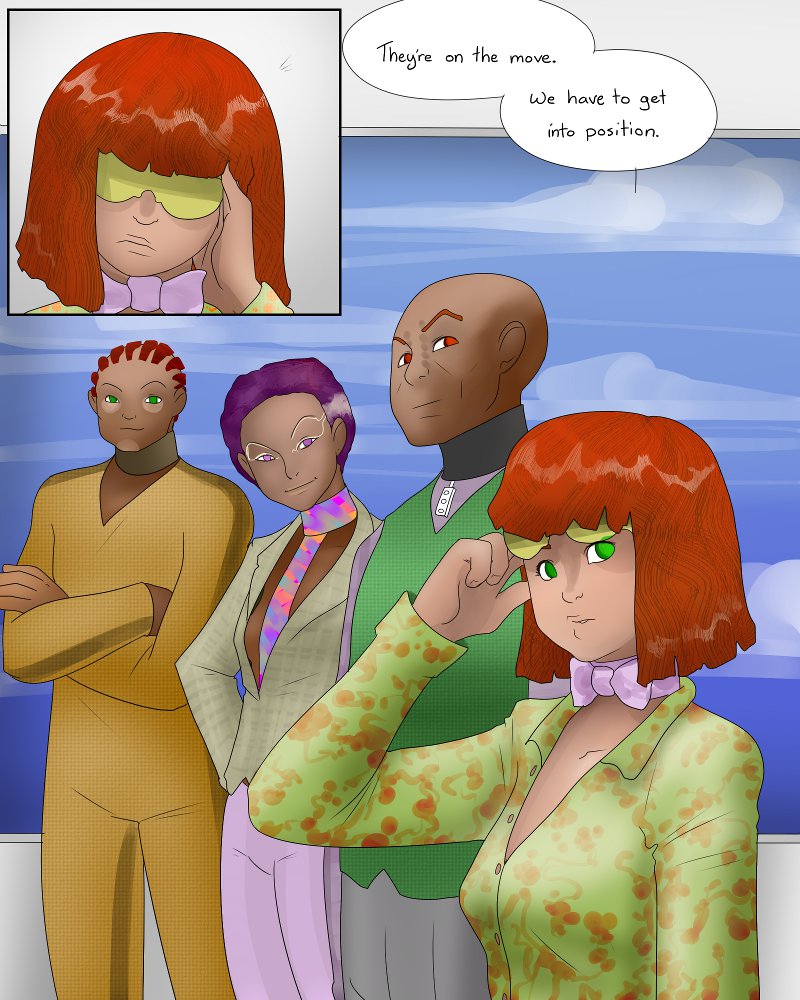 Here's the latest round of avatars:

I do believe that View once admitted to having an 80's hair band in mind while drawing the flashback sequence.

So it is highly possible.

It's the bowtie that really do it for me with Iri's outfit ... it's just over the top. :D

Nah, the outfit is just to avoid the crowds of stupid fans. But her actions are Riddlery.
Sheela 27th Feb 2013, 1:01 AM
edit delete reply

Well, that's gonna be fun. :)
Though I suspect that Kax might not enjoy it.
She came up with this plan when Ayata made her think about probability shadows, didn't she ?
pensivedragon 27th Feb 2013, 1:11 AM
edit delete reply

Riot's neck tie is still my favourite fashion accessory in the series so far. And Ayata easily wins for my favourite outfits. But Iris current ensemble is still pretty awesome. And I agree, the bow-tie really makes it.
view 27th Feb 2013, 1:22 AM
edit delete reply

Their ties and collars all seem to help cover their jacks.
view 27th Feb 2013, 2:52 AM
edit delete reply

Never thought of it, since Iri never wore one, and neither did Next.

Anyone that doesn't wear one wears a popped collar. The only times they're without them is when they've shooed away all the strangers.
psianogen (Guest) 27th Feb 2013, 5:04 AM
edit delete reply
I've been thinking about the similarities between Poison Monkey style and certain tropical frogs, anyone else been thinking that?

Heh, spent the past few hours looking over the comics from the beginning, and View already pointed out that they all cover their necks in public. So now I'm wondering if interfaces like that are socially unacceptable, or they just don't want everyone to know how common they are in PM culture. I have a theory, recently View said that there is a wireless version of the splitter, if they all have them they could be watching each others backs without anyone noticing at all. Iri just flags anything the others need to know, and all the talking is for the sake of anyone watching. Would make sense, as that kind of technology would first see military uses, then more fun ones.

I did notice something in an earlier comic, Iri seemed annoyed by the guys in the bar that were bad mouthing genetic alterations. Does give credence to some of the theories about PM's being engineered.
VlRGlL 27th Feb 2013, 12:40 AM
edit delete reply

How's about an avatar for little old me? Any things fine reallly but maybe some ceph in your style?
view 27th Feb 2013, 12:50 AM
edit delete reply

From Crysis. Still my favorite looking alien from any media.

I'll see what I can do. It'll come out Space-Pulp Style, so I look forward to ruining your love of them forever!
VlRGlL 27th Feb 2013, 3:00 AM
edit delete reply

I think the PM's just brought disco back, looking at the comments. I'll help by dressing just as they do! Lets revive disco!
Sheela 27th Feb 2013, 3:51 AM
edit delete reply

What if they cover their necks to cover that neck-sex-port thing
Edit: #123- neck

Huh. I just noticed that. They all cover their necks. Everyone, everywhere. That has to be it! Even though they have those skin plug things.

I still am in love with these outfits too. The glasses, the bow tie, the quasi-tie thing scarf.
Post a Comment