As you know, Bob 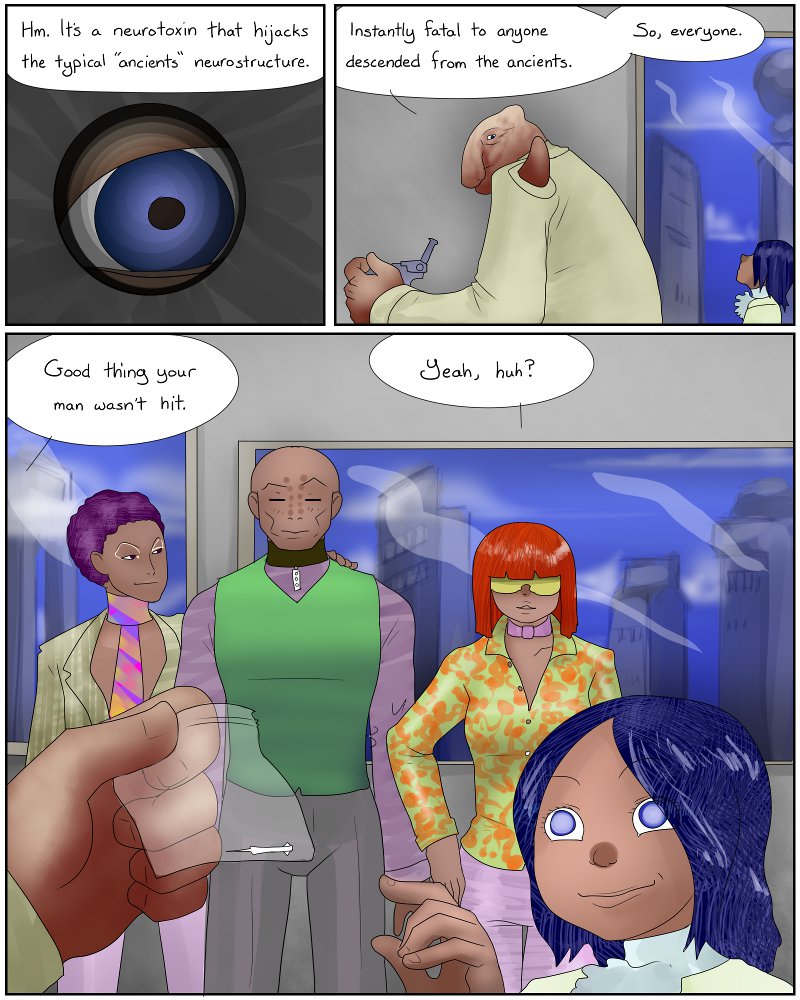 Here are some avatars:

If I haven't given you your avatar, I have officially forgotten you exist. Ask again!
User comments:
cattservant 26th Feb 2013, 1:09 AM
edit delete reply

Next is entirely too excited for his own good - And for others wellbeeing too, for that matter.

I do not recall there being simultaneous Sex and violence in starship troopers. 'Course, I have not seen all the sequels, just the original. And the awesome book. I remember a gratuitous shower scene in the movie (which View has done) and gory violence (which View has also done). Yay for trashy and sexy pulp! The comic is certainly living up to its name, and I am lovin' every page of it. :)
Bellar 26th Feb 2013, 2:43 AM
edit delete reply

I can't read Next's expression, is he gleeful? He's kind of got that "smiling" eyes look, but the lack of a toothy smile makes him appear slightly crazy or trepidatious. Both of which fit, but appear odd.
view 26th Feb 2013, 2:47 AM
edit delete reply

So if it's supposed to kill anything instantly how did Pinkie survive?
view 26th Feb 2013, 3:15 AM
edit delete reply

That is the question. All the clues you need are already spelled out, but it's okay if you don't see it, yet.
cattservant 26th Feb 2013, 3:21 AM
edit delete reply

Well, I see some good theories being tossed around. But for these to be possible, View would have had to Fib a little with the Ancestry Tree Which has been done on very rare occasions. So is within the realm of possibility. IE: "PM" on the tree may be purposely vague, and may not in fact stand for "Poison Monkey".

1) "Instantly fatal to anyone DESCENDED from the ancients." Poison monkeys may in fact be a pure strain of the ancients.
2) Or, like Phuji suggests, Poison Monkeys may be a rare unique evolution. This is possibly supported by page 19
Iri: Poison monkeys aren't some generic species.
3) Like Cattservent suggests, it may simply be a natural defence/immunity after centuries/millennia of radioactive/biochemical/toxic exposure on their planet. Evidence for this would be the copious consumption of their favorite poison stix, with no ill effects. And their survival on said toxic planet. Plus, if the life tree is accurate, it counters the first two options, leaving only this one as a possiblity.
4) "Poison Stix" May be a misnomer. Perhaps the cigarettes PM's consume constantly are actually specially engineered to give Poison Monkeys special immunities/abilities.

I doubt they are robots, as we have seen them bleed. Plus, I doubt View would do that twist twice in a row. But those linkups in their necks are certainly odd. Are they cyborgs? Is it a common thing to have these plugs surgically implanted in every PM baby? Or is it a naturally occurring organic input? Implying that PMs are genetically engineered. Hmmm...

5)While they ARE originally descended from the ancients like everyone else, they have genetically engineered themselves away from various (or all) genetic traces of that ancestry.

I am currently in the "Supercharged immune system" camp. But I think there may still be some other good theories out there.
cattservant 26th Feb 2013, 3:28 PM
edit delete reply

Could be, but I think the rush of endorphins and adrenaline from getting surprised, shot, thrown off a tall building, and literally still being able to walk away from the encounter had a large effect on his libido.
As for the high, I think it was related to painkillers given to him when he was fixed up, or due to what they were smoking. Or both.
Sheela 26th Feb 2013, 4:32 PM
edit delete reply

It does seem possible that PM's have an unusual immunity, that maybe the whitestix help keep going - Hence, it's their poison, and by imbibing it often, it might make them immune to the poison .. choosing a poison that the enemy uses might be highly beneficial in a war.

As for the whole "genetically engineered" idea .. why not clones .. of the ancestors ?

I'm going to rule out number 3, it seems quite unlikely that there are neurotoxins laying about the Poison Monkey homeworld. Those things just don't occur naturally, unlike extremes in pH or radiation.

I could see 4 maybe being the case, though 2 seems just as likely if view's hints have been as up front as Iri's early comments.
Razingthebar (Guest) 26th Feb 2013, 6:20 PM
edit delete reply
I suppose I should elaborate on my original idea. They have inorganic nervous systems...somehow.
Lysander 17th May 2013, 3:18 PM
edit delete reply

I thought they were originally a bio-mechanical replicant slave race, built by the original species of the PM planet to deal with the various unsavory jobs. They were made dependent on the stix -- like ketracel-white or the lysine contingency. The ports on their necks were originally for downloading training, false memories, reward/punishment, and monitoring for sedition.

However the Poison Monkeys found a way to circumvent the control, using the ports to organize themselves. They modified some sort of pollution-control device to convert the atmosphere into the contents of the stix, which were toxic to the original inhabitants. There followed a series of wars, and the eventual extinction of the original race.
mal3 26th Feb 2013, 4:39 AM
edit delete reply

Since you offered an avatar...

Could I get a male PM, with brown curly hair down to his shoulders? pwetty pwetty pwease?
view 26th Feb 2013, 4:41 AM
edit delete reply

Okay. Do you have a preference for facial markings or how square-jawed you want to be?
mal3 26th Feb 2013, 5:00 AM
edit delete reply

I'd like to think that Poison Monkeys are immune to all manner of toxic materials. . . maybe. But that's just me.

Why poison monkeys are immune to said Toxin is an interesting question. However, I am also very intrigued by the possibilities of a Deadly Neurotoxin that affects every single species in the galaxy EXCEPT now for Poison Monkeys. I think President Next just found a potent weapon, both politically and physically. I wonder how he will use it.
fluffycloud 26th Feb 2013, 3:37 PM
edit delete reply
Sounds like there was a giant war on the PM home world, and the species we now know as the PM are probably not the original inhabitants of that world, but a bio-engineered soldier created to fight that war... built to survive the weapons the original inhabitants were slinging at each other, and eventually, the *only* survivors on the planet.

"Not some random species", but a very particular one that isn't necessarily connected to anything else in known existence.
cattservant 26th Feb 2013, 3:54 PM
edit delete reply

I mentioned something along these lines up above, but you give it some much needed context. And this theory would seem to use most of the hints I have noticed so far. Mind you when view finally reveals it there is still likely to be forehead smackin' and exclamations of "Of course! It is so obvious in retrospect" :)

But I am liking the genetically engineered theory more and more. It could still mean that they have a super immune system, but now it would be by design instead of an accident of evolution. And could account for the neck inputs. And assuming they are merely modified versions of the species that originally inhabited the planet, and not created from scratch, would allow them to still be technically descended from the ancients while at the same time having a unique genetic code.
Kuratenshi 26th Feb 2013, 7:19 PM
edit delete reply

Next thing you know, Barbarella appears. :)
Guest (Guest) 26th Feb 2013, 11:49 PM
edit delete reply
I'm willing to bet that the poison monkeys are immune to this sort of thing as they are a purer strain of the ancestry, highly evolved to tolerate toxic environments, toxins and the like from constant war and pollution. But since their planet doesn't have the stressors to produce evolutionary change in appearance (size, dermal plates etc) their bodies look much more "human" than the other races.