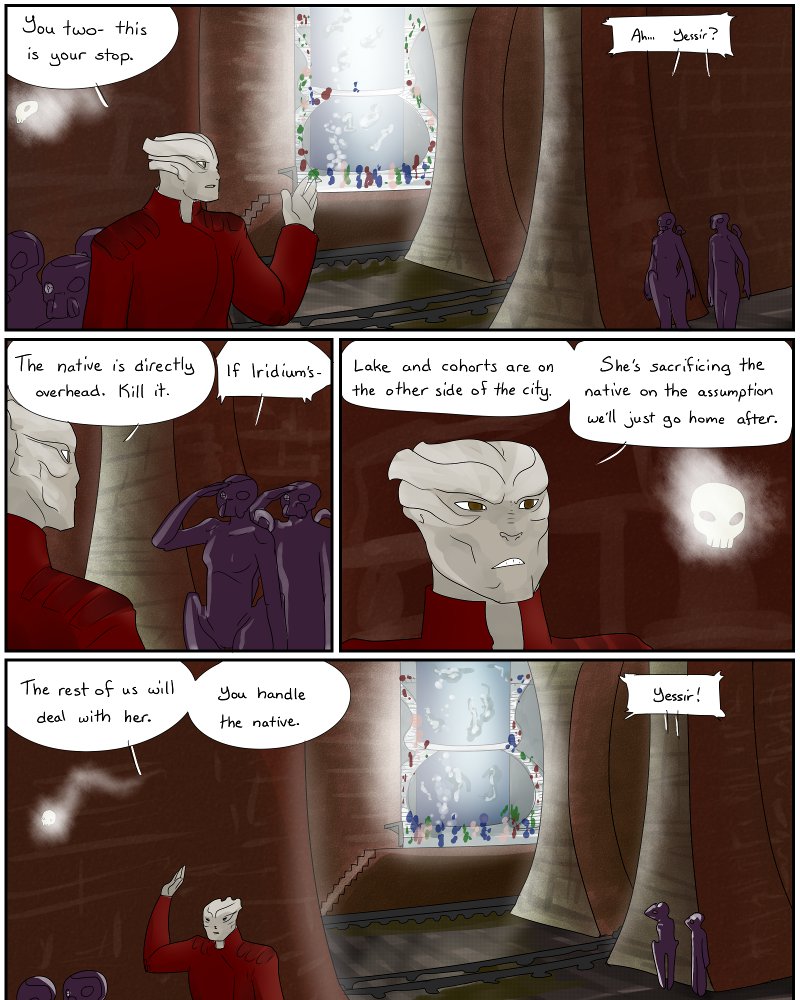 Iri can see the freaking future. Even with another psycher messing with her "visions", I kind of doubt she'd leave "the native" alone without having some plan to protect her. There's probably at least some convoluted measures like with Pinky.

...Unless view plans to kill her and break the hearts of many fans. There's not much we can do about the whims of authors. *sighs*
Sheela 19th Feb 2013, 11:59 PM
edit delete reply

Ah, but lets not forget that we are talking about two genre-savy redshirts here ... things might turn out .. differently - than the good general might expect. :)
After all, Iridium seems to be particularly good at seeing trough probability shadows.

Besides, Ayata could use some new bodyguards, couldn't she just ? And what better bodyguards than two genre-savy redshirts that she already knows?
I bet the letter is for the guards, maybe some veiled threaths from Iri if they don't help Ayata out. XD
pensivedragon 20th Feb 2013, 12:50 AM
edit delete reply

Hmmm, well it is always a good idea to be prepared for all eventualities.

All we know at the moment is that she is supposed to be hand delivering a message, and was expressly told to go solo as a bodyguard would somehow make it more dangerous. Makes me wonder if she may come under attack near a body of water.
Sheela 20th Feb 2013, 1:03 AM
edit delete reply

Heck, maybe she'll meet with elephant man, even though he doesn't have a gub anymore he could still be useful what with him being able to see the future a bit too, he'd be great at avoiding the unity soldiers.
pensivedragon 20th Feb 2013, 1:21 AM
edit delete reply

I'm guessing their weapons could be dangerous even to him, so he'd probably prefer avoiding them.

I'm thinking the letter is intended for the two, and they are both PMs, undercover (especially since we've never seen them out of full body uniform, which just BEGS for a big 'The Reveal' scene). If she had a bodyguard, it would devolve into an unnecessary firefight so they keep up appearances (they know they're being watched/tested/sacrificed, and the one keeping tabs no doubt knows that they know that) and would be more dangerous for all involved- this way they can 'capture' her and carry her off, to safety, whilst Iri 'and compatriots' deals with the rest.

"I'm thinking the letter is intended for the two, and they are both PMs, undercover..."

There's a thought. Dunno about them both being poison monkeys though. I think one of them has abnormal legs that can't be just a mere disguise. 'Course that would not exclude a poison monkey with, say, cybernetic legs... But still, I doubt they are poison monkeys in disguise. If they are double agents, I would say they are more likely just what species they appear to be.

Also, if the letter is intended for them, it could just as easily be a recruitment offer. Getting them to become double agents, or defect.
Leaving a note here. (Guest) 20th Feb 2013, 8:17 AM
edit delete reply
"was expressly told to go solo as a bodyguard would somehow make it more dangerous. Makes me wonder if she may come under attack near a body of water. "

This is already true. If she wasn't solo then more then two redshirts would have been sent after her.
Sheela 20th Feb 2013, 2:37 PM
edit delete reply

The rasterizing you used at the train tracks doesn't work out so well. :(

Edit :
I see you changed it !
It's better, but the raster texture you use still peeks trough a bit, try something more organic, like, say, a granite texture in graytones, or something like that.
cattservant 20th Feb 2013, 2:39 AM
edit delete reply