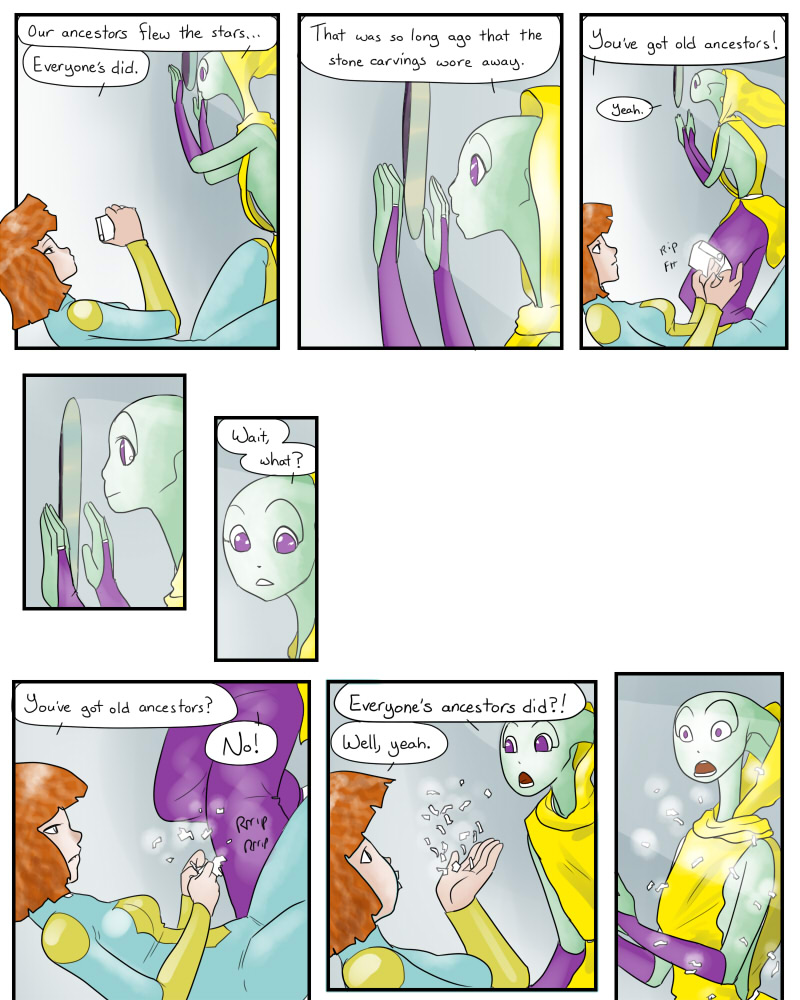 I second that. Especially the little added touch of the glow off the paper shreds.

You seem to be having a lot of fun playing with light (sources/shadows/insensity), in addition to your stated goal of practising colour. An endeavour I wholeheartedly encourage, and am greatly enjoying.
view 31st Jul 2012, 11:32 PM
edit delete reply

I look forward to when you get all pro at coloring. I think it looks pretty good right now so this will be interesting to go back and look at when you achieve master status.

The alien facial expressions also are already awesome. Even the kinda limited ones for the whale admiral made me giggle. And I like the long eyebrows or brow lines on Ayeta here.
Sheela 1st Aug 2012, 2:04 PM
edit delete reply

Heh, coloring flat surfaces so they look like they are in perspective is hard.

They say travel broadens the mind...

My mind is not blown quite yet, but my interest is very much piqued.
JasperWB 1st Aug 2012, 1:41 AM
edit delete reply

Hers. My mind already asploded long ago, which sucks because I've found myself busy with menial, thought intensive work all of a sudden. My brain hurts at the end of the day
Meh.Aloe (Guest) 31st Jul 2012, 11:54 PM
edit delete reply
I like how the glowy silver strips in the last panel look a bit like dandelion seeds, floating upon the winds of the cosmos...

... Maybe that's just memories of CivIII talking, though. The space race victory was the only one I could ever get. >_>

But why is this revelation of the distant past so shocking? D:

And might this mean there was one space-faring ancestor race from which all the aliens descend? If so, might it have been humans, with the story set somewhere in our distant evolutionary future? Perhaps at some point in the comic we're going to stumble on an ancient temple, within it a vine-covered statue of Miwa reaching for the stars with an evil grin on her face... :P
Hedrah (Guest) 31st Jul 2012, 11:58 PM
edit delete reply
....i don't get it....
view 1st Aug 2012, 1:50 AM
edit delete reply

It goes back to the common ancestor view mentioned in the comments a page or so back and I'm sure will be addressed in the story at some point. She doesn't know about the link here so, surprise.
kill3st 1st Aug 2012, 2:18 AM
edit delete reply

View, loving the new comic... but I feel left out... Could you make me one of those spiffy new colorized avatars that I can use all over the intarwebs?

You got the very first colorized avatar!

If you want me to add tint to the robot face, I can do that. It won't be terribly impressive, though. If you want a new icon entirely, let me know what kind of alien you want to be.
kill3st 1st Aug 2012, 2:55 AM
edit delete reply

View, please just surprise me... if you can fit the red fedora in, that's a bonus!

edit: I guess this is the first time I can ever call

Yugh, I hate it when people tell me to do whatever I want. What I want to draw is naked ladies, but I don't think that's what you want in an avatar.

how about, some ground rules.
a character from your new comic, preferably female, with SOME clothing on, and a red fedora.
of your favorite race
view 1st Aug 2012, 3:42 AM
edit delete reply

I nominate Rear Admiral Mereis with a red fedora for kill3st's new avatar. She could be naked too, or perhaps with a couple of strategically placed strands of seaweed... gloob gloob a dloob!
JasperWB 1st Aug 2012, 9:17 AM
edit delete reply

View, if you want to draw naked ladies go ahead. I guarantee no one here will complain. If you ever just get the uncontrollable urge to draw naked ladies for God's sake go ahead and do it! Just put them up somewhere so I at least can see them. Even basic sketches, avatars. Whatever!

That's like...one of my wants out of life. To have people solicit me with nudie drawings every now and then for critiques or just cuz they doodled them. It would be the best morale booster. I'd be feeling down and suddenly "Here's a naked lady I crafted, figured you'd like it too".
Sheela 1st Aug 2012, 2:07 PM
edit delete reply

So pretty much most species we will see have been spacefaring at one point or another for quite some time?
cattservant 1st Aug 2012, 10:31 AM
edit delete reply

@view RE: Naked ladies; When you get enough species represented, you could do your own version of this classic as a wall paper or even in the plot!
view 1st Aug 2012, 1:22 PM
edit delete reply

Who are you trying to kid? There is clearly a GUY in that painting.
Sheela 1st Aug 2012, 2:08 PM
edit delete reply

That's ok, you can turn him into a woman too!

I've been out and about a lot, but I have to sit down for a minute and say, I'm really enjoying color. It's looking really good. I like the creative use of cells, too.
merle 10th Feb 2014, 5:39 PM
edit delete reply