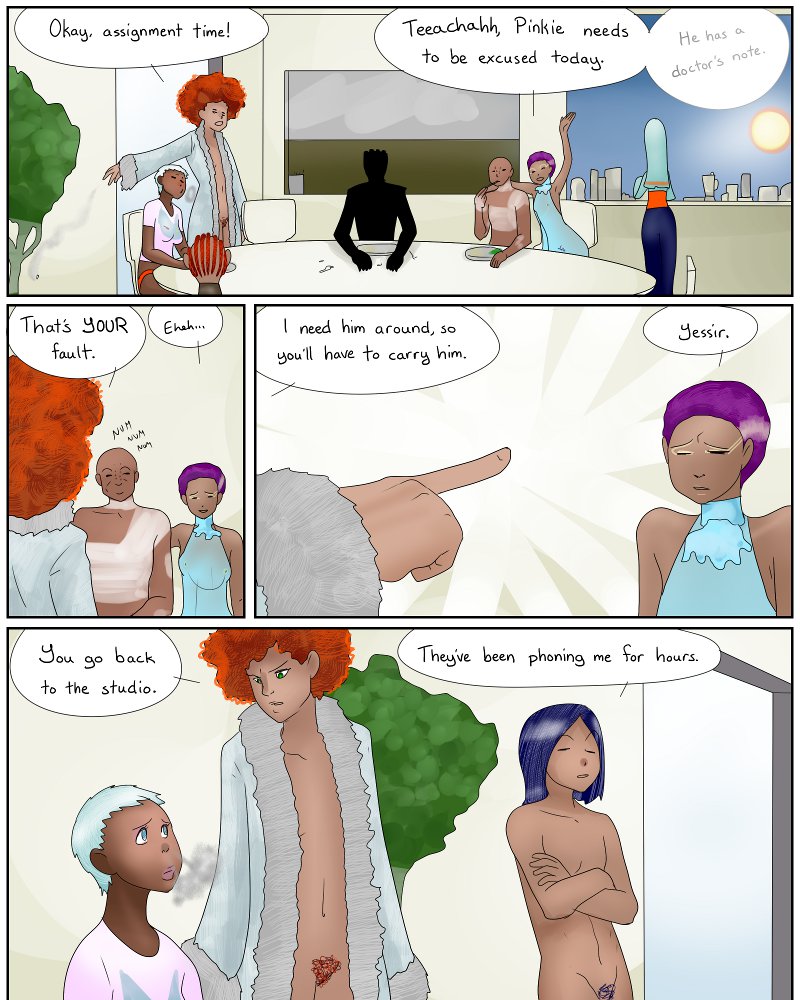 Aww, poor Shark, not even her puppy dog eyes seems to help her out in the last panel.
Offcourse, the studio must be somewhat frantic by now.

Edit : Is Rythm Riot actually strong enough to carry him around physically for a whole day?
view 16th Feb 2013, 2:21 AM
edit delete reply

No, it's in a military sense. It means she has to take care of him and make sure he gets everywhere he needs to go without getting hurt.
Sheela 16th Feb 2013, 2:23 AM
edit delete reply

Ah, that makes more sense .. basically, he just became her responsibility.
Offcourse, she might not resent that at all, when it comes down to it. :)

Just a quick easy fix, we'll call it a typo.

Yeah, she was a nice diversion for while there.
She's still the most sensual beer drinker yet.

So... If parts of this whole mess make it into future movies, would Shark still play Iri, and have someone else play herself, or would she play herself and have someone else play Iri. Both outcomes seem equally amusing to me.
Bellar (Guest) 16th Feb 2013, 12:18 PM
edit delete reply
They could just take her out of the storyline completely and fill her in with some made up actress. These movies seem like the "based on a true story" type rather than the "factual re-enactment" type.
Kain Yusanagi 16th Feb 2013, 12:57 PM
edit delete reply

I would agree with that if it weren't for the fact that it was revealed that they are using lines verbatim from the tape recordings of her missions that they recovered the logs from. If this ever did get turned into a movie, most likely they'd get Shark to play Iri as normal, and someone appropriate to Shark to play her- You use your best actress for the leading role, after all. And I really don't think that the actress herself would be willing to portray a role in a movie based on real events in which she took part that excised her from her role in history, regardless of how minor or important it was.

This said, they might even have Shark (as Iri) doing scenes with someone who only looks like Shark from behind (a body double) and use creative camera angles and positioning to not show her face too closely, then switch perspectives and have it be Shark (as herself) with an Iri-double. or possibly do both roles in all scenes with a stand-in playing the other only for positioning, and have the scenes be spliced so it's Shark & Shark, reacting to temporary doubles but put together to make it look like she's interacting with herself (editing techniques should be that far ahead given other tech).
view 16th Feb 2013, 2:37 PM
edit delete reply

Considering that her movies have drawn in enough fans to have multitudes of cosplayers, across multiple races, and secondary characters to have fangirls (Go Jagi!), I'd think that the movie industry, if it is anything at all like what we have (where profit reigns supreme), would definitely use it.

Of course in the end these are entirely my own imaginings and concepts and personal views on it, so, take my voluble (as usual) discourse with that in mind. :)

Pre-post addendum: I'm speaking on the topic of an action movie, not something along the lines of a documentary, which after a period of consideration it seemed these movies might be more defined as. If that were the case, the volume of the information necessary could certainly result in Shark's part being seen as relatively superfluous to the overall story of Iri's life in movie form, and cut.

PS: I realized it could come off as incredibly brown-nosing with the way my words were formulated in regards to your work, and while I'll leave them for posterity, I will add this addendum to correct a possible misconception that could arise:

I enjoy your work because the characters feel alive, like breathing entities we could interact with; not some 2D cardboard cutout of a character who has no personality or emotion that doesn't evoke your own emotions. If a sex scene happens, it is made looking like it happens as it might were the characters actual people- No doujinshi-styled fan pairing sudden sex situations, or random sex for no reason other than "if the question is sex, then the answer is yes!". It's that factor, that treating it naturally, that renders sexual situations as not feeling shoehorned or reduce the quality of everything else in a given work (be it SP or NMtG). Likely this'll be seen as brownnosing now too, so I'll just stop with this. >_>;
Bellar (Guest) 16th Feb 2013, 6:41 PM
edit delete reply
I don't suppose the events currently unfolding will find their way into a movie that pops up during the later story, eh view?
pensivedragon 16th Feb 2013, 9:37 PM
edit delete reply

I believe the average movie gestation period is about 2 years or more, if you include all the preproduction of scripting, approval and financing. So unless View is planning some large time jumps, or the story lasts significantly longer than NMtG... Then I highly doubt it will factor into any future events. Assuming of course that things are even remotely comparable between out universes. For all i know, they can make a movie in 2 months. :)

Some more food for thought on the inclusion of Shark's part in a future movie. What movie company or advertising agency would pass up on the chance to promote a movie in which one of the main actors actually experienced the events first hand. Even if Sharks role is insignificant to the overall story. Most studios would still bend over backwards to include it.

Not to mention that if they show off the adventures she had with Iri, they get to show off how Iri blocked a bullet with Swordy Sword.

BTW, roughly how much time has passed in the story so far? My impression is maybe about a month or so has passed since Iri met Ayata. But I have no idea how much time passed on each planet, or during travel between planets. So that is probably wrong.
view 16th Feb 2013, 10:14 PM
edit delete reply

It's been a little longer than that, because I'm kind of glossing over the length of time space travel takes. But it's about right.
Wandering Spark (Guest) 17th Feb 2013, 7:32 AM
edit delete reply
Welp, looks like I'm all caught up again. Good work View, I can't wait to get deeper into the plot.
Post a Comment