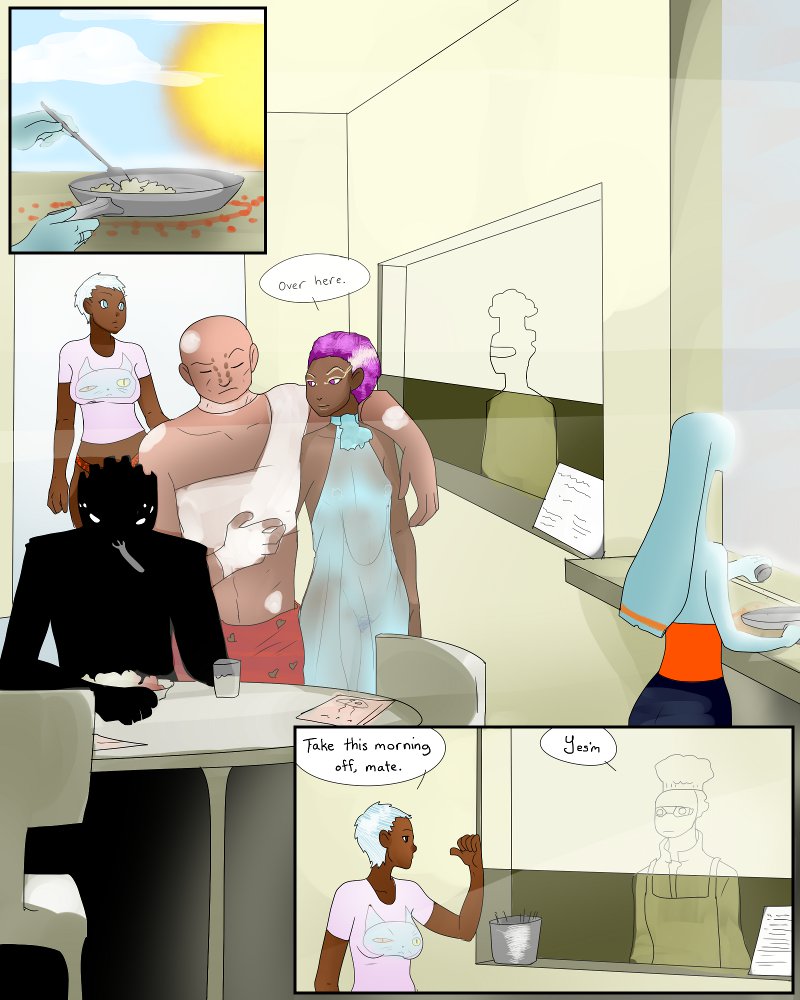 Question: is it ever tricky to draw Jagi? Like right now, you can't see his arm. For a second it looked like the fork was just floating. Also, do the characters see him as a pitch-black featureless mass like we do?
view 12th Feb 2013, 9:54 PM
edit delete reply

They see him as pitch-black as we do.

When I draw Jagi, I often put in something specifically like the "floating fork" to kind of poke fun at the concept of a pitch black character.
Nightsky 12th Feb 2013, 10:01 PM
edit delete reply

So has some of Pinkie's enthusiasm.
pensivedragon 13th Feb 2013, 3:21 AM
edit delete reply

He's there in the previous comic as well; But since they aren't interacting with him, he's just standing there in the one panel, and then is never on panel again; easy enough to miss. This said, the fact he's all one colour, even his clothes, makes me think he's some kinda robot.

Also, love the negligee of Riot's, and the cat shirt of Shark's. Far too many prudes would have people get up and put on uncomfortable outfits before even having breakfast, which just feels unnatural- especially in the context of a spaceship, where privacy is minimal just due to the closeness of it all. Once again, you've made a scene feel right just by characters feeling alive, View.
RandomTroll 12th Feb 2013, 10:32 PM
edit delete reply

Dat' nipple chain, thank you view. Very nice.
PainfulBuggery (Guest) 13th Feb 2013, 4:15 AM
edit delete reply
like the coloring on Riot's choice of clothing. Is it bad I noticed the transparency because of her purple pubic hair. I like saying that. Purple Pubes. And is that some nipple rings with a chain hanging between them?
view 13th Feb 2013, 4:22 AM
edit delete reply

I wonder where the Jagina is this morning? Just out of frame on the other side of Jagi perhaps? Or still in bed? BTW does she even have an official name, or is she just LuckyJagiFan01?
view 13th Feb 2013, 8:19 PM
edit delete reply

Well, there's a ledge coming off of the window. It's a multipurpose kitchen prep area - everything is driven by the powered surface, so there's no need to separate it into cooktop, chopping board, plugs, etc.
Post a Comment