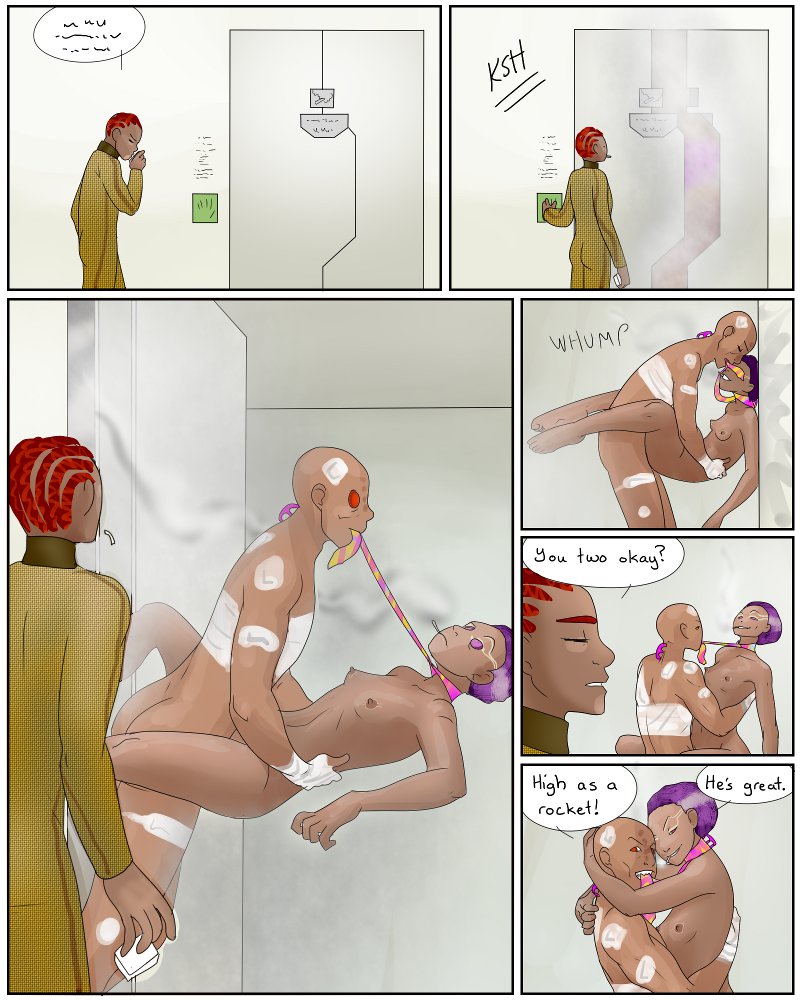 Well, since there is only one place to smoke, maybe Pinkie and Riot wouldn't mind Dragon joining them. They do seem rather unbalanced at the moment. Dragon could be a steadying influence.
view 10th Feb 2013, 11:53 PM
edit delete reply

Poison Monkey culture is pretty weird. One of the things that affects them is who they're plugged into.

Pinkie and Riot are plugged into each other, as were the three on the bed (although they were only plugged in one level). This kind of forms a closed circle, and it's pretty rude to try to break in.
pensivedragon 11th Feb 2013, 12:14 AM
edit delete reply

Dosn't sound too weird to me. I mean, the technology itself is a little odd, but the culture and taboos that you describe evolving out of it make sense.

Is Pinkie kinda atypical for a poison monkey? I would think he'd be looking for a partner himself at this point.

Do what'cha gotta do, when/where/how ya gotta do it!

I'm still wondering what Ayata has been doing all this time. She doesn't seem to be in anyone else's room.
pensivedragon 11th Feb 2013, 12:05 AM
edit delete reply

With this little porny tour of the ship I find myself wondering about its layout. Such as, how many crew memebers can it comfortably hold, and aside from the smoking room, common room, and observation deck, are there any other interesting rooms? Not including obvious ones like an engine room, and the control room.
view 11th Feb 2013, 12:27 AM
edit delete reply

It's a whole lot larger than the other ship, but designed to only have a few crewmembers. Lots of wasted space on purpose.

It can theoretically operate completely automatically, although in practice you'll need a pilot to negotiate with space stations and such. It has room for about ten comfortably, but you could probably cram thirty in if nobody smoked.
Prestidigititis 11th Feb 2013, 12:32 AM
edit delete reply

These pages certainly qualify as a good faith attempt at cramming people in.
cattservant 11th Feb 2013, 1:33 AM
edit delete reply

I'm getting old and slow.
I thought they were still in a hotel planet side.

Huh. I figured they were on their ship. Looking back, there were certainly enough clues they were in a hotel, but it just never crossed my mind. My thought process was, if you have a large, comfortable ship docked in port, you use it. lol.
view 11th Feb 2013, 1:34 PM
edit delete reply

@Phuji Maybe her species only gets aroused during the high tide of the third full moon of her planet's Spring equinox, and then it's roe and milt up to your eyeballs!!!
Phuji 11th Feb 2013, 3:29 AM
edit delete reply

I'll just stick with my thoughts that she's in her own room getting frisky with herself or something.
cattservant 11th Feb 2013, 3:57 AM
edit delete reply

I take it Pinkie is high on some sort of space age Vicodin?
Kain Yusanagi (Guest) 11th Feb 2013, 4:51 PM
edit delete reply
Probably high on the very toxins he was njected with via dart gun, too. I'm thinking that Poison Monkey biology is such that most toxins in the known universe,m if not all, are mild irritants at best, required carcinogens/toxins for atmospheric supplimenting off-homeworld at worst. After all, why would they be called Poison Monkeys otherwise? In fact, I wouldn't be all that surprised to find out that they act like that in regards to radiation as well.
Kain Yusanagi 11th Feb 2013, 4:53 PM
edit delete reply

Also, now registered to have an official account and not have that "guest" beside my name. Whoo. *camps out the site for the cutting edge on new posts*

Edit: ...By the by, is it just me or does pinkie's eye in panel three ad Riot's left eye in the same panel both look a bit... lizardy? More specifically, the sclera seems to be completely absent, which I don't think for the size of the eye (and the fact they both have visible sclera in later panels) is quite right; Even if they were both high as kites the dilation of their eyes would only shrink the iris rather than expand the iris and subsume the sclera (in short, it looks a little weird unless there's something you're not telling us- like how the TMNT in the latest reboot also have a 'solid eye colour' setup when they go into combat, giving them "soulless eyes". Do the PMs have some non-simian ancestry to them?).

Also, if it wouldn't be too forward of me to request one after only finding your comics through Cheer and Les Comic (of which I've known for several years now) and reading all of NMTG and what is posted of SP in a few hours off and on, I'd really love it if you could make me an avatar; Would love one of Jagi wearing a top hat and a monocle, or something similarly silly like that. :D
Sheela 11th Feb 2013, 8:11 PM
edit delete reply

Aha ... another one joins the flock of commentators. :D

As for panel three, I think the eyes were done like that to be a sort of "comic shorthand" for being surprised.

Edit :
Just realized that she might be into auto asphyxiation too, and their bugeyedness might be from being short on breath. Offcourse, Pinkie would not technically be out of breath, but he'd get the feedback from Riot via the mind link thingy.

The sheer absurdism of that just makes me smile, why I thought of it. x3 Plus it would look classy on him. But then, you could say the same of a dress on Iri.... Assuming you could ever get her to stand wearing it for more than a few seconds before tearing it up until it was comfortable XD

And I'd have agreed on the comic shorthand reasoning except Riot's right eye still has sclera showing, so is out of place if that were true; Truly a conundrum that View has created here.
pensivedragon 11th Feb 2013, 10:11 PM
edit delete reply

Actually, I think what you are seeing on the right eye is her eyebrow/eyeliner makeup.

As far as the auto-asphyxiation goes, I could see it being popular among splitter users. As you would be able to take it to the very edge in relative safety, with the constant feedback.
Kain Yusanagi 11th Feb 2013, 10:24 PM
edit delete reply

I don't buy the erotic asphyxiation angle personally, since that tie is far too loose to be taut enough to choke off air anywhere near that level, even if the splitter evokes that sort of biometric response in the partner that it would be safe (which is a really interesting application and I wish we had these IRL; Would make those irritating little moments of guessing how someone is feeling a lot easier by just, well, feeling it yourself). I can see how it could be her eyeshadow, though; If it were, it'd still look a bit awkward with the right side of her face lifting up awkwardly/her eye sunken, since it's about on the same level as her brow and the ey is beneath that, which would render it a fluttered-closed eyelid, but placement is awkward.
Sheela 11th Feb 2013, 11:27 PM
edit delete reply

Oh man .. I can't believe I missed that they were "charging" out the door he was opening, they must have been leaning on it, hence why they also thus into the wall.

Definately a "surprise" comic shorthand then.

Sorry to hear you having issues with unstable power ... I thought you lived in a developed western world country ?
Vin (Guest) 28th Aug 2014, 1:44 AM
edit delete reply
Let me guess. Pinkie quotes Janye from "Firefly", "I'll be in my bunk."
Post a Comment