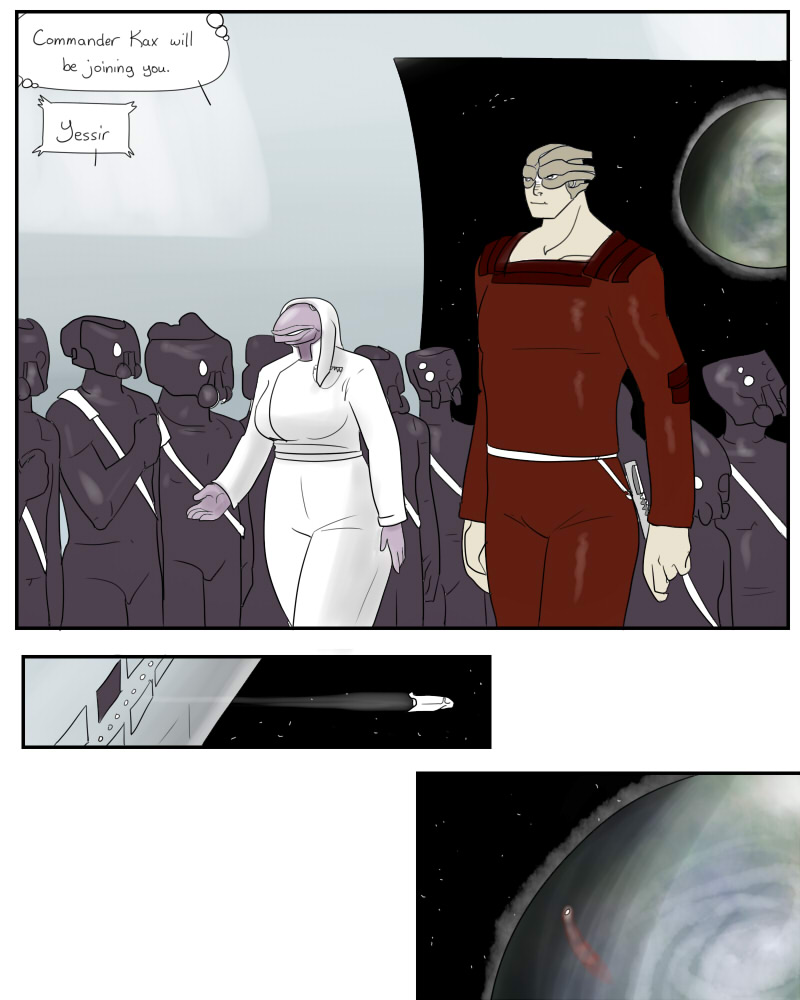 I've decided that all the aliens are going to end up looking exactly like some other alien to somebody, and then they'll announce it and nobody will ever be able to see them any other way.

It's a lady. The response in this military is always "sir", never "maam".

So the bubbles are your version of indicating "gloob gloob" language to the reader, but for the characters in the story, it would be sorta like having a second language or something like that ?

Or is there some sort of mechanic/electronic translator at play ?
view 27th Jul 2012, 9:51 PM
edit delete reply

Proably for the best to go with your Gut .. and they are your aliens. so its really irrelivant if they HAPPEN to look Sorta Kinda Maybe like something else. excellent page!
Sheela 27th Jul 2012, 9:34 PM
edit delete reply

Head seems a bit small ... is that on purpose ?

He's an alien after all, doesn't have to conform to human proportions. Heck, he could have had four legs, but he didn't.
view 27th Jul 2012, 9:50 PM
edit delete reply

Interestingly, he's almost the opposite of a standing bear, which has short limbs and big heads (due to the fur, admittedly).
And no ... I have absolutely no idea how I ended up thinking about bears. XD

Edit :
Also clothes can make a huge difference, even with the same character. Just imagine Adolf Hitler in a sweatshirt and slacks instead of his nazi leather trenchcoat ?
Hard to imagine, isn't it ?
Maybe add a big afro as well ?

I agree about the design. Like I said, that's how shit works with aliens. We know you ain't ripping things off and it ain't bad to be inspired by something.

OK so the red suit guy is from a sort of "military" species...so what are the...hum big lip purple woman species?XD her suit makes me thing of something more peaceful..
view 28th Jul 2012, 1:08 PM
edit delete reply

Does anyone ever bother to look at pre-comments these days? That and the whole character design discussion about SIMILARITIES.
view 28th Jul 2012, 9:49 PM
edit delete reply

It's not worth getting upset over. I prefer slightly oblivious comments to no comments.
pkrankow 28th Jul 2012, 3:52 PM
edit delete reply

I think the character design is going to be problematic no matter what you do, it has all been done before by someone!

Are there shape shifters in your universe or was that just tongue in cheek about character design?

Took a whole day to realize it, but I am mildly disappointed about the lack of shape shifters. Then again this won't be your last story...
cattservant 28th Jul 2012, 9:47 PM
edit delete reply

Of course, there are some of your readers whose most recent video game experience involved a pocket full of quarters...

Now little Poison Money is in for it... time for the mass killing of those pesky and rebellious Asparagus People (cause they're greenish and thin).
cattservant 29th Jul 2012, 12:30 PM
edit delete reply

There's something piscatorial about the above comment!
duLapel 30th Jul 2012, 4:58 AM
edit delete reply

:D
The Admiral is a Pisces with feet
A very peculiar Darwinian feat...

The now poem begins;how will it end?
Cattsevant is challenged to complete.
cattservant 30th Jul 2012, 5:44 AM
edit delete reply

And her henchman too,
A huge boney squid...*
If you take that view
What else could be hid? (!)

So it looks like officers are privileged to expose their faces! Do those gimp suit uniforms have any utility besides designating rank and providing as much anonymity as possible to the grunts, given their wild variance in head size?
cattservant 30th Jul 2012, 7:41 AM
edit delete reply

Maybe the suit is an anti-odorant device so everyone can work together.
Godongith 30th Jul 2012, 1:23 PM
edit delete reply

The augmented soldiers are not simply dudes with helmets on. They're heavily cybernetically augmented.
cattservant 31st Jul 2012, 1:01 AM
edit delete reply

Of course, the Big Shots would maintain their individuality both as a matter of ego power and for the practical purpose of having an easily recognizable chain of command.
Gabriel (Guest) 29th Aug 2013, 8:45 AM
edit delete reply
The top half of his head DEFINITEVLY looks like a Turians from Mass Effect, but that's not really an issue I suppose, it's hard to create completely original things like Aliens without drawing from other sources subconsciously (Unless you've never seen ME before, in which case you are a wizard.)