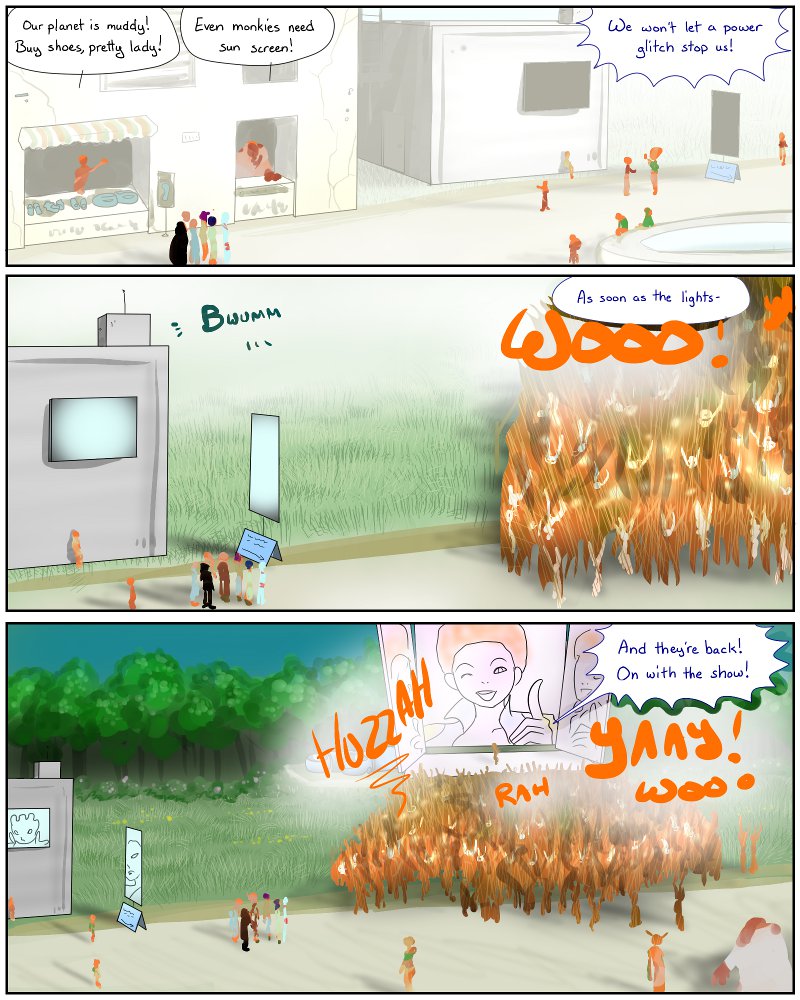 I wonder what kind of shoes Ayata would buy ?
Flip flops ?

You're really good at backgrounds. Also, I thought that crowd was a fire at first. I guess they're as bright and active as one.
view 6th Jan 2013, 9:31 PM
edit delete reply

That's pretty much a crowd. I made them red because I wanted them to stand out, but it's the first time I've tried to draw a real crowd.
Nightsky 6th Jan 2013, 9:36 PM
edit delete reply

Crowds seem difficult to draw. Actually, they ARE difficult. A trick I've seen is to use a pastel rainbow gradient of sorts on them rather than just one color. In this case, I think you could just go with the color of Iri's jumpsuit, since more than half of them are probably cosplaying and wearing one.
view 6th Jan 2013, 10:38 PM
edit delete reply

So, to continue the thought. If it IS the same thing going on, the effect seems a lot more pronounced. Perhaps due to the solar flares? Could this be the mysterious 3rd psycher's viewpoint?

Also, Pinkie seems to have disappeared again. For a large scary monkey he is exceptionally good at hiding. :D
view 7th Jan 2013, 4:56 AM
edit delete reply

I think it is a solid attempt. Picking a single unifying colour is a tried and true method of depicting a group. Then you threw in a some variations in shade to show it is not a single large blob, but rather a crowd of individuals (more effort to do, but pays off beautifully in the last panel). Of the two panel with crowds, I feel the last panel gives the impression the best. This is helped by several factors. You are further pulled back and so can see waving hands at the front of the crowd, and feet at the back. The shapes in the last panel also seem to have more humanoid dimensions. Legs and feet are more rounded, versus the very sharp ones in the second panel. And there are less of the distracting random bits of white. I am not totally sure what they are supposed to be in the second panel (looks like feet and arms to me), but the in final panel they seem to only be part of the occasional ornamentation such as a necklace or shirt.

Personally, I think the fine light coloured streaks (they also look a lot like sparks) take away from the otherwise cohesive mob impression. Also, put right next to grass with a very similar brush stroke, they make the mob appear more as part of the background (or fire, as some have suggested) then as people, or even a group of people.
I also agree with some of the above posters in that the main colour of the mob would have worked well as blue, to represent legions of fans in Iri costumes. But that is a purely aesthetic choice (I am not a huge fan of the warmer side of the colour pallet, lol) Nor do I even know if the majority of the group is wearing Iri costumes. If they are not, then the group being blue would be a moot point.

Oh, and to be clear. You most certainly CAN draw crowds. Your depiction of one in the final panel is REALLY damn good.
view 8th Jan 2013, 12:20 AM
edit delete reply