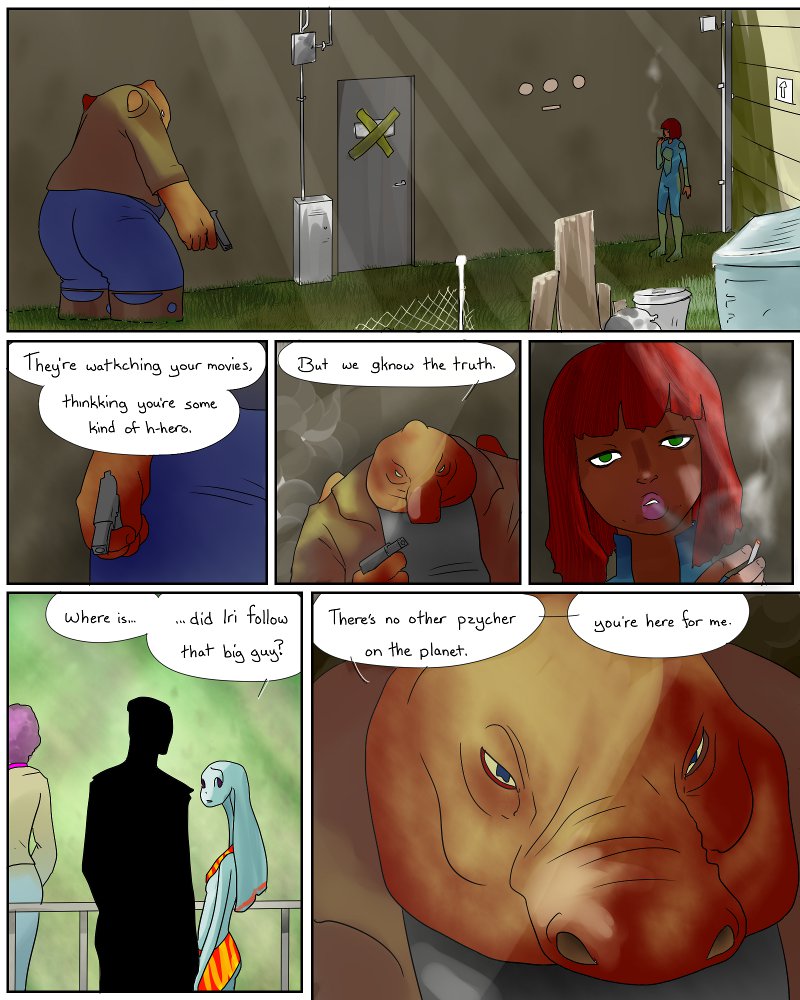 All of next week is SPECIES WEEK. Wooo.

I'll be releasing on an automatic schedule. My ability to comment is going to be pretty limited.

We are dedicated.
We will be right here.
And thank you very much.

He seems to have a strange way of speaking. Probably related to his oversized nose.

Also, for some reason I keep thinking of Jumba from Lilo and Stitch when I see him. Probably the similar body type (actually, definitely that), even though there's no other similarities. :P
view 21st Dec 2012, 12:13 AM
edit delete reply

I kept expecting him to do a big *SNORT* with a snozz like that, while he talked. lol.

Love the detailed light and shadow on this page.
Seafog (Guest) 21st Dec 2012, 3:47 AM
edit delete reply
I'm getting the vibe that he is scared, nay terrified, that Iri is hunting HIM. Makes me wonder if he is a 'bad guy' or just a guy.
Have we ever had a description of exactly what Iri is a hunter OF? We have seen her hunt a 'bad guy' warlordess who turned out to be a psycher, and a genetic abomination. So I'm wondering if this guy is dead, or just mistaken as to Iri's job description.
view 21st Dec 2012, 3:50 AM
edit delete reply

You won't know for sure until next year! DUNDUNDUNNNNNNN
Seafog (Guest) 21st Dec 2012, 3:53 AM
edit delete reply
Also, how many types of psycher are there? We have seen future sight (Iri), pyrotechnics (warlordess), teleportation (Iri with Swordysword) and hiding (for lack of a better word, from warlordess). Possibly physical performance enhancement as well, but not positive.
view 21st Dec 2012, 4:05 AM
edit delete reply

Well, those are kinds of powers, not kinds of psycher.

In terms of categories, most psychers are either biomorphic (bug monster), dimensional (Iri), or electromagnetic (warlordress).

There's usually some overlap, but fundamentally you'll tend to be much, much better at one than another.

Things are made a little more complicated because there's a drug that enhances biomorphic powers, but none for enhancing the other kinds of powers. This means that someone with a big talent in another field might still become a biomorphic psycher.
Jst56strong 21st Dec 2012, 4:18 AM
edit delete reply

Home from basic training and the first comic I check in on made me sad then the next made me pissed off, View I'm happy to see that your world continues to be awesome. Thanks for all you do.
view 21st Dec 2012, 4:25 AM
edit delete reply

Better than most. I just finished my rounds. The score is View + The Oatmeal 1 the rest of the internet -3451.

oh and may if it isn’t a bother can i get a new avatar? Keep the whole soldier thing but can you make it all cool and colored now? :3

Besides,
Ms. Iridium Lake
Is this Galaxy's example
Of the concept of herding Cats!
Meh.Aloe 28th Dec 2012, 4:42 AM
edit delete reply

I have to admit that for a brief moment I forgot, for some reason, that it isn't their job to guard Iri. >_< But still! People randomly disappearing from their party! Not a good body-guarding sign! :P The herding cats bit is true though, and it comes from an expert. :P
dougwarner59 21st Dec 2012, 9:16 PM
edit delete reply

fantastic lighting effects. This page doesn't look as good as the previous page but the light beams helps make up for it.
Viscount_Tusc 21st Dec 2012, 11:06 PM
edit delete reply

I've never played Crys... Kris... Chrkiysyysis... however you spell it. What are the Ceph's salient features, besides being technobugs?
VlRGlL 22nd Dec 2012, 8:00 PM
edit delete reply

Technosquid. They wouldn't be able to traverse on land normally so they build bipedal suits or just build a vehicle around them. By themselves they are fragile but with the suits they can be very fierce opposition. They also have a insect like caste system with higher and lower castes having differing physical characteristics. But what I'm asking is will you have a species that physical aren't bipedal so they just build them or have a hive mind?
view 22nd Dec 2012, 8:19 PM
edit delete reply

All of the sentient species here derive from the same tree, so the closest you get are whale-like species.
VlRGlL 23rd Dec 2012, 3:25 AM
edit delete reply

Why did you think they were all humanoids that breathe the same atmosphere?
VlRGlL 23rd Dec 2012, 5:54 AM
edit delete reply

Wow these species must be spread out so far and they must have been separated for tens if not hundreds of millions of years. I thought you just had star trek syndrome
Sheela 22nd Dec 2012, 9:35 PM
edit delete reply