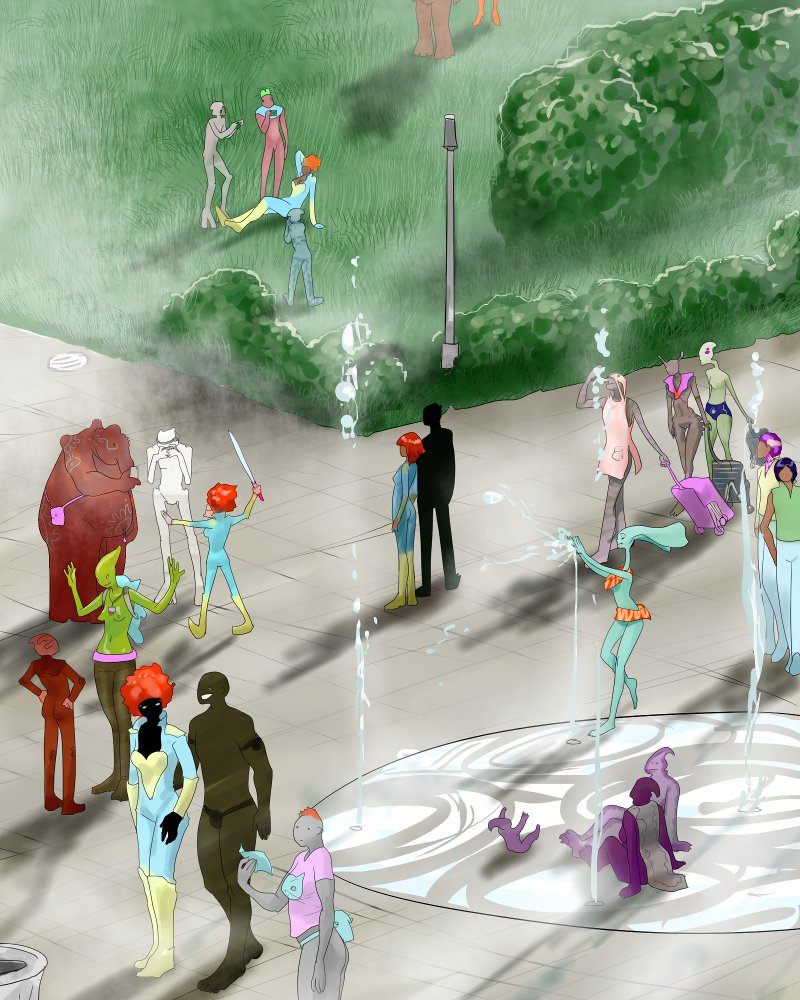 I think if I draw another 800 pages like this, I may become decent at them. I think the big flaw here is the grass area. :P
User comments:
cattservant 18th Dec 2012, 10:31 PM
edit delete reply

Does this grass smell like apples too?
pensivedragon 19th Dec 2012, 6:28 AM
edit delete reply

I feel like I am missing a reference here, why would it smell like apples?
cattservant 19th Dec 2012, 6:46 AM
edit delete reply

That is obscure alright, but appropriate none the less.
Nightsky 18th Dec 2012, 10:40 PM
edit delete reply

Are they at IriCon, or just a normal park? Then again, there IS a new Iri movie being released today...

Also, I see you included pensivedragon's female Gisoglasscian Iri cosplayer idea like you promised. You really DO pay attention to us! :D
pensivedragon 19th Dec 2012, 5:55 AM
edit delete reply

I noticed that too. And she looks as cool as I hoped :D

There is a lot to like on this page. The topless Salu Salu (cool name by the way) is certainly at the top of my list because 1) topless, and 2) green is my favorite colour. I am also particularly fond of the grey girl in the bottom with the kitty shirt, whose species name escapes me at the moment (is she even wearing so much as a thong?).

The bushes on the other hand look two dimensional.

A product of millions of years of selective evolution in straight canyon passes, where it avoided predation by cyclopean herbivores who migrated back and forth along the canyon trails.

Though out of place in more open environs, it remains a staple of poison monkey garden aesthetics...

Well, it's no Where's Waldo, but I wanted to show everyone that the Space Federation is actually full of a wide variety of laid-back people. Not just the thugs and criminals Iri has to deal with.
Viscount_Tusc 19th Dec 2012, 12:27 AM
edit delete reply

What species is the tall, topless green girl behind the Gisoglassican Iri?

I like her look. She's one of the first things on the page that caught my eye after I spotted the main characters.

They're a species with very absorbtive skin: it absorbs and purifies most of the toxins that build up in mechanical air - the kind of air you find on space stations and starships.

Basically, having one of them aboard can reduce the filter load by about ten or twenty other people's worth of toxins, as well as a few shipboard systems that produce incidental toxins (such as washing machines). They are generally pretty popular and often offered tax cuts or other minor incentives to move in or serve on the crew.

The Poison Monkeys are actively courting the species, although that will probably never come up. Filters a major concern for PMs, because while they are cheap and easy to make on a planet, they're large and irritating to carry on a ship or space station. Of course, PMs pump a lot of crap into the air, and this makes filters a major operating expense.

According to Next, the ideal crew for a PM starship would be 2/3 PMs, 1/3 Salu Salu. That would allow the ship to operate indefinitely without a filter supply line.

To most people, though, the Salu Salu are mostly notable for being shiny and smooth.
Nightsky 19th Dec 2012, 2:14 AM
edit delete reply

Wow. That's a lot of detail for a species that probably won't play a large role. :o

Do you have detailed information on all the species on this page?
view 19th Dec 2012, 2:30 AM
edit delete reply

You've seen them before, too - the mission broker on the pirate base.

There are two species on this page that are "gardeners" - generally planet-bound species usually considered to be caretakers and homebodies of the farmbelts. The purple guys generally do the aquafarming and swampfarming, while the red elephant things generally handle drier farmlands.

Generally, any of either species willing to travel off-planet are eager to disprove the stereotypes. So these folks are really unusual by their species' standards.

(There are some locals of each on this planet, sure, but they wouldn't go to a movie of this sort. At least, not in public.)
pensivedragon 19th Dec 2012, 6:03 AM
edit delete reply

I don't think we have had such a carefree page yet in your space opera. The closest I can think of would be Ayatas playing with Iri's Swordy Sword. But that was merely background. Having a whole splash page filled with relaxing and joyful aliens is refreshing palette cleanser.

I am now rubbing my hand in anticipation of what kind of pulp you will toss at us next. :)

I doubt I am the only one that loves to hear more about these great aliens you cook up. Since you mentioned you have set names, and various amounts of background info on them ready at hand. Is there any chance we could get some excerpts of said notes for the extras page for those of us that delight in delving into your details?
Sheela 20th Dec 2012, 8:06 PM
edit delete reply

Some pages with a few concept sketches of a race and a bio description would make for some neat extra pages, and add to the universe. :)


Could add some for concepts/planets/special buildings and stuff like that too, if the mood strikes.

Grass looks stylized but pretty good to me. The bushes look kinda 2-d though, and the shadows may be too light? Honestly not entirely sure, they just bug me for some reason. Also, I am very curious about just what is going through Iri's mind as she looks around. :)

Edit: Didn't even notice that someone had pointed this stuff out. Now I feel silly :)
JasperWB 20th Dec 2012, 5:12 AM
edit delete reply