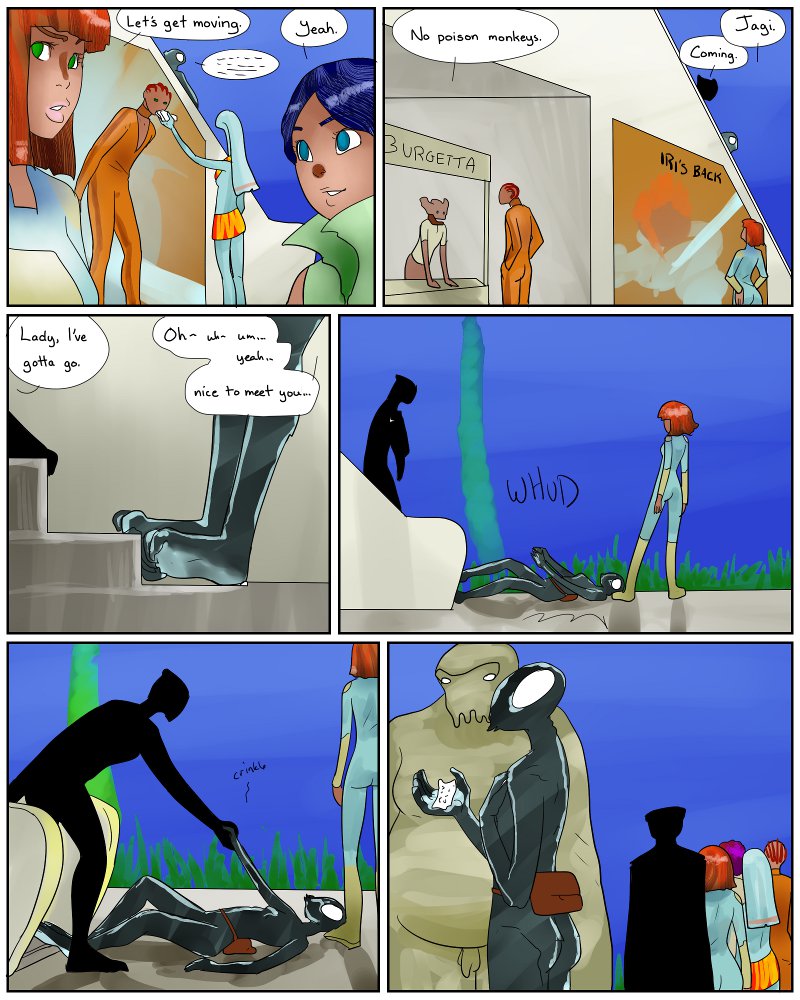 Also, funny how much people discriminate Poison Monkeys. Meanwhile, a totally unknown species can waltz right up and get whatever they want. :P How do you know they're not acidic and can melt your counter?
view 18th Dec 2012, 12:09 AM
edit delete reply

I have to wonder how much Iri added to it...

Do FAMOUS PMs like Shark Lake have those problems? Her fame breaks the species barrier.
cattservant 18th Dec 2012, 12:08 AM
edit delete reply

Hmmm, Ayatas clothes seem to be missing some yellow lines, and Dragon is missing his hair.

I am a little confused about the staircase. It seems as though they are on an escalator, and the Jagina trips at the bottom. But how were her and Jagi on it for so long in the first place? Was Jagi backpeddaling up it this whole time? Also, I love how Iri saved the Jagina from a concussion, by putting her foot out as a cushion, but didn't bother to actually catch her. Helping set Jagi up to get laid perhaps?

And here we see evidence of Jagis arm pocket that you mentioned in the comments on the last page come into play. As he takes a piece of paper out of it in panel 4 and slips it to the Jagina. His personal contact information perhaps?
view 18th Dec 2012, 12:37 AM
edit delete reply

You are right, I fixed it.

I thought I had made it clear that they were backing up the escalator, but I guess not. Need to work on my clarity.
pensivedragon 18th Dec 2012, 6:16 AM
edit delete reply

Mmm. Well, it is clear via extrapolation, after viewing this page. But I think much of the problem is with the combination of Jagi and the angles. The only clear shots of him from the front show him standing firmly on a single step. And when viewed partially from the side, his natural blackness prevents any subtle movements from being easily identified. So even though I know what is going on, when I go back over the past pages, it STILL seems like Jagi never takes a step. You have given yourself an interesting challenge in Jagi, his appearance generally requires large emotive gestures to get across what other characters could with little expressions, but his personality is very understated, so gives little reason for such grand movements. As such, I am always surprised every time you DO manage to get across subtle emotions and actions with him.

And I think that is probably your greatest strength as an artist. You are a master of nuance and subtlety. You draw some of the best damn characters around. Through your almost unerring ability to get just the right amount of breast sag, or that little bit of flab in the belly when a character bends over you really make them stand out as being 'genuine' for lack of a better word at the moment.

So ya, the escalator part was not totally clear in the previous pages, but it was clear enough at the end, and really that was the only part it needed to be anyway.

Aw, all Jagi ever does, is looming and scowling at people. :D
Seafog (Guest) 18th Dec 2012, 3:52 PM
edit delete reply
Hmm, I think another part of it is that the escalator steps do not actually look like they are mobile. And that the angles we have seen the escalator at have not emphasized this function.
And that is some nice insight you have there Pensivedragon, ty for sharing.
SpaceMonkey 18th Dec 2012, 8:25 PM
edit delete reply

Having gone back a few pages my feeling is it is actually pretty obvious he's backing up. It just becomes less clear to daily readers who are seeing each page in a more stand-alone way.

I think so too.

I was just thinking autograph but either way good for her.

Does everyone else prevent all their falling things from breaking in that manner? I know I do.
pensivedragon 18th Dec 2012, 3:56 PM
edit delete reply

She looks rather shocked in the last panel. So I think when Iri called out Jagi by name she put two and two together (Iri being dress as 'authentic' Iri, and Jagis 'fantastic' costume). And subsequently tripped because she was distracted. And likely when she actually reads the piece of paper, it will confirm it (be it an autograph, or a way to get in contact with him). In case she has and lingering doubts about if they were just really hard core cosplayers.
JasperWB 20th Dec 2012, 5:10 AM
edit delete reply