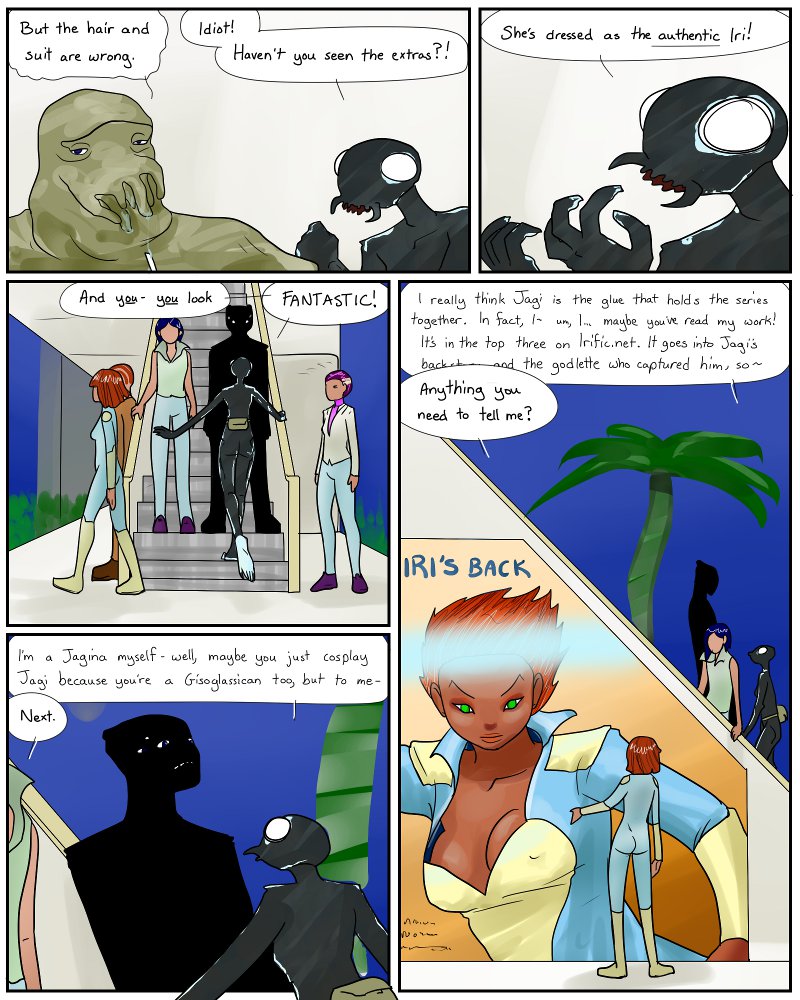 On a sidenote: Movie version Iri is sexy.

I haven't really decided whether I have time to bring her into the story, but her name is Shark Lake and she's also a fangirl.
Phuji 15th Dec 2012, 1:11 AM
edit delete reply

Ahh, another Lake! Surely she would be more than a fangirl.
Was humble respect one of her motivations to play the part of Iri for the movie?
Sheela 15th Dec 2012, 3:19 PM
edit delete reply

I think you should put her in, fangirls would fit really well in a comic with a pulp setting such as this.
After all, pulps are basically a bunch of concepts and ideas mashed together in an easy to read format on paper made of cheap wood pulp (hence the word pulp).

Maybe make her a cyborg/android fangirl too .. that would be pretty hilarious, and could be a nod towards NMTG.
AngelofPity (Guest) 15th Dec 2012, 9:46 AM
edit delete reply
Enough with the hitting things.

Whether one would or would not hit that like the fist of an angry god wreaking vengeance upon the ungodly and heralding the ending of the third era with a host of angels on the plains of Megadon is irrelevant.

The question of whether one would tap that so hard the next man to pull you out would be crowned the next king of England should not actually arise personally.

Instead empathize with the characters. Imagine yourself experiencing the events. Take each in turn.

And furthermore, it kinda looks a little odd from this end to tell the artist you would rail a character so hard you'd receive the Union Pacific, referencing the Pacific Railroad Act, signed into law by President Lincoln in 1862. I could also have gone with "plow a character so hard you'd free loose particulate top soil in drought susceptible regions causing severe erosion."
pensivedragon 15th Dec 2012, 3:02 PM
edit delete reply

Alright, I think angleofpity's comment deserves a permanent account, not a lowly guest one. Cause that is hilarious.
Sheela 15th Dec 2012, 3:08 PM
edit delete reply

Never before have I seen someone reference the Rapture, Excalibur, and Manifest Destiny via railroads as a gauge to how vigorously I would have sexual relations with them.

Regardless of my desires to hit it so hard that Congress would launch an investigation regarding my alleged use of performance enhancing drugs, I would respectfully allow you to have a go at it first if you so desired.
Nightsky 15th Dec 2012, 12:27 AM
edit delete reply

Also, how would you cosplay Jagi? I've been getting the impression that he's a pure black being who wears no clothes. Unless that's the most body-covering catsuit ever or something and he's actually pink underneath. Actually, what's his body made of? It doesn't reflect light and is pitch black, and you can't even see his features. Is he made of some form of dark matter or something?
view 15th Dec 2012, 12:35 AM
edit delete reply

You cosplay Jagi in the same way you cosplay the Hulk: you douse yourself in body paint.

More specifically, could another Grisoglassican do anything other than cosplay Jagi? Does his species come in more colours that just 'black hole'?

Actually, now that i think about it... I would love to see a female Grisoglasscian cosplaying as Iri. Red wig, blue jumpsuit, and complete absence of other features.
view 15th Dec 2012, 3:19 PM
edit delete reply

Well, you never know. I have seen girl genius cosplay. So if Views comics continue to gain in popularity (which I have no doubt they will) Then I see no reason that cosplay of NMtG and Space Pulp could not happen. Although the Jagi costume would likely have to be like a felt or velvet bodysuit, rather than body paint. As most conventions I am familiar with frown on public nudity. :)
cattservant 15th Dec 2012, 2:49 AM
edit delete reply

Bet he made considerable political hay with it too.
Sheela 15th Dec 2012, 6:58 PM
edit delete reply

I'm sure Next got a lot of political benefit out of his dealings* with Iri's absent Fame.

Sort of about being alert and making use of any opportunity that presents itself.
Sheela 16th Dec 2012, 11:16 AM
edit delete reply

Hail Sheela!
An early good morning to you!

And good afternoon to you too. :)

True enough, Greed and deceit does exists in Politics, though cunning is a bit more rare, again with it being dependant on intelligence.
Bellar (Guest) 15th Dec 2012, 5:46 AM
edit delete reply
Irific.net doesn't seem to exist yet.

Yeah, I wonder if it's View's way of telling us he wants fanfics of his comics ?
pensivedragon 15th Dec 2012, 3:14 PM
edit delete reply

Absolutely, I am going to go start shipping Iri and Jagi right now.
Wait, no. That makes too much sense.
NEXT and Jagi, thats the ticket!
Sheela 15th Dec 2012, 3:21 PM
edit delete reply

Heh, just wait until the wanna-be's get a load of Ayata !

Ayata might end up cosplayed because she is hanging out with the best possible cosplayers - the real thing. So someone might just cosplay her because of association with other cosplayers.

You should bring her in! That'd be cool. Sexy fangirl. I didn't even know they were that famous damn. I can't want until Ayata is portrayed in a sequel.

I like all the colors on this page. Just, you know, putting that out there.
pensivedragon 15th Dec 2012, 3:15 PM
edit delete reply

Well, that will only happen if they start some sort of big trouble on the planet...

I went with aggressive color patches rather than trying to make any sense...
Sheela 15th Dec 2012, 3:21 PM
edit delete reply

What ... are you implying that Iri starts trouble ?

Notice how this page talks about a "series", and how the movie's poster says "Iri's Back", suggesting it isn't even the first movie.

I am guessing this page brought back some of Kuratenshi's supressed convention cosplay memories. From the strength of the reaction, I am gonna guess anime conventions.
WanderingSpark (Guest) 16th Dec 2012, 7:10 AM
edit delete reply
Two questions: One, are the fans aware that Iri & co. are real people as opposed to fictional characters? And two, do you actually wish for us to rate each of your pages or do you not really care, because if it is the former I would gladly start taking the extra second to do so.
Sheela 16th Dec 2012, 11:18 AM
edit delete reply

They seem to be aware that she's a real person, if the second frame is to be believed.
Post a Comment