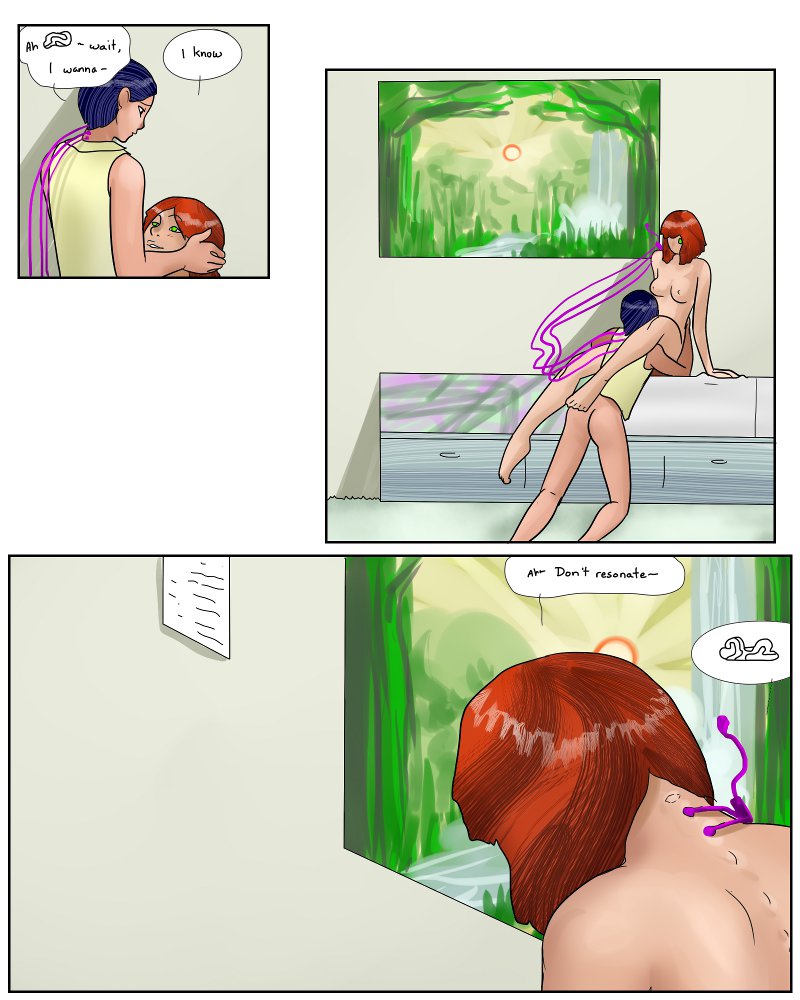 And it positively resonates.

If you stray too deep into the land of Pun,
You will fall into the waters of Nup!
pensivedragon 8th Dec 2012, 1:44 AM
edit delete reply

Mmmm, turnabout is fair play. I guess with the splitter hooked up it is a hell of a lot easier to be a conscientious lover.
G-Rock 8th Dec 2012, 3:20 AM
edit delete reply

Oh Thank you great Communicator.*
Thank you for feeding our heads!
(the Doormouse)**

... I keed, I keed, we not worship you as god. You just good comic-drawer person what draws good comics. Also writes.

But is rare in this day and age!
Logan (Guest) 8th Dec 2012, 11:01 PM
edit delete reply
Probably the memory part of the splitter shares memory between the two users (not much of an intuitive leap there)and I'm thinking that she doesn't want him to know some of her secrets (probably about her banishment/killing the prime minister or whatever she did) I'm also thinking that its not very uncommon for poison monkeys to not connect the memory part of the splitter because sometimes you don't wanna be an open book even if you are being intimate. Interesting that his is connected all the way, I wonder if she is getting all him memories or if she is being even more devious and that was the whole point of this sexytime.
view 9th Dec 2012, 12:57 AM
edit delete reply

The splitter is really intended for foursomes...
Bellar (Guest) 9th Dec 2012, 8:11 AM
edit delete reply
That would explain all the offers Iri got on her way to see Next.

Well, that depends. One person could hook up all 3 lines at the short end. And each of the long trailing ends could be connected to a different person. What effect such a set-up would have, I do not know. As I am unsure if each biological port has a unique function, such as one is for memory access, one for transmitting physical sensations, one for sharing motor control. For all I know, the function of each port could be changed on the fly, so that all three could be for sharing physical sensations, so you could either share between 4 people, or multiply the sensation several times between two people.

Personally, I would be most interested to know, in the case of using it for a foursome. If one person gets to have most of the fun, by receiving all the sensations from the rest, or if they would act as sort of a relay so everyone shares the experience equally?

And yah, I am really over-anylizing this pulpy comic, but its Views fault for getting me in the habit of doing so with NMtG :D
view 9th Dec 2012, 6:56 PM
edit delete reply