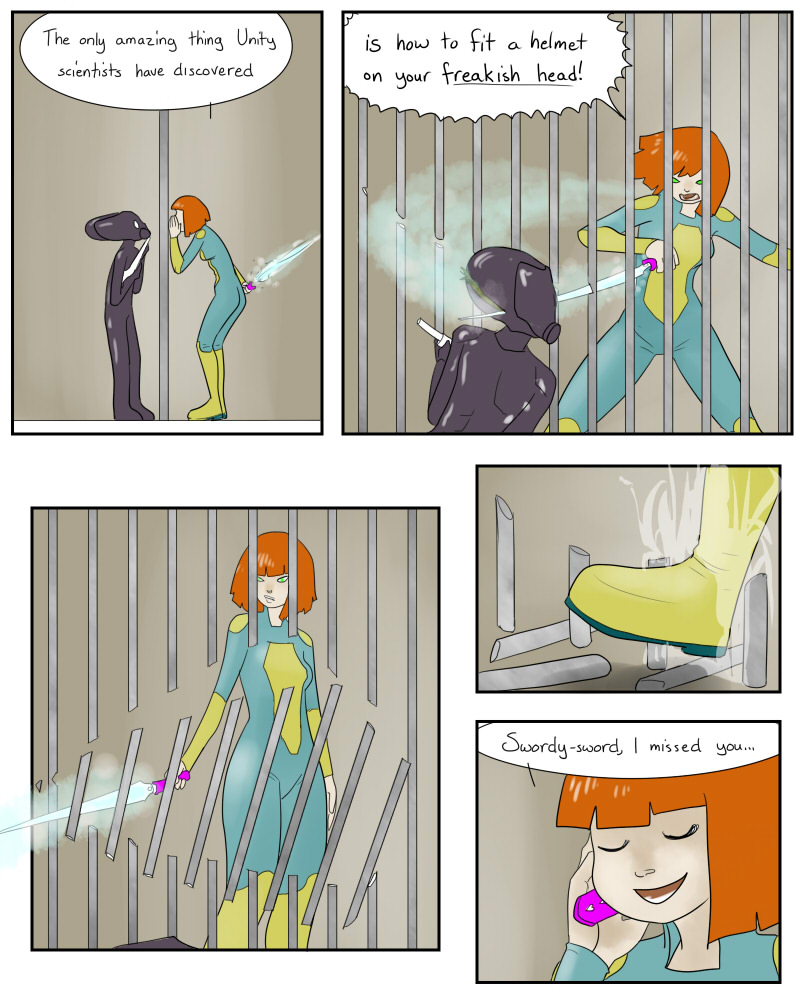 The main takeaway lesson here seems to be; When a cute Poison Monkey asks you for a Whitestix, you should give her one!

She left it in the sinking escape pod. Otherwise, they would have taken it away from her and stuck it somewhere hard to get it from.
cattservant 24th Jul 2012, 12:29 AM
edit delete reply

So, Iri is a telekinetic/teleportationist.
Sheela 24th Jul 2012, 1:12 AM
edit delete reply

That reminds me that someone made a Borogove card deck on Kickstarter. It's pretty awesome. :)
cattservant 24th Jul 2012, 11:19 AM
edit delete reply

I'm getting the intimation that Swordy-sword is a 'swiss army sword' style weapon with all kinds kinds of potential settings!
JasperWB 24th Jul 2012, 1:51 AM
edit delete reply

Poor Fat Head. So his head wasn't just full of hot air. I'll imagine it sliced like a fresh melon then! I only hope we see the non Unity version of that alien at some point.
AlfaFoxtail 24th Jul 2012, 2:10 AM
edit delete reply

sorry i dunno if you said it in the comments or something, but does this comic have an actual schedule?
Swordy sword is best friend!
view 24th Jul 2012, 2:12 AM
edit delete reply

I know I might be picking at straws,but in the third panel, you can't see the first cut she did on the bars, unless she moved a lot to her left(but you can still see the corpse on the ground).

The lower cut there also doesn't seem to be the same, as she clearly did it much higher(almost at her head, even if she had a slightly lowered stance in panel 2, it's at waist height in panel 3). The bars don't even have other cuts there.

She probably also widens it a bit more, since it's as low as her ankle on panel 4, which it clearly isn't on panel 3.

I couldn't get it to look right. I just went with the version that looked okay.
cattservant 24th Jul 2012, 1:55 PM
edit delete reply

Ha! Well I was sorta right, it WAS a blade forming in her hand. But I thought it was going to be a blade of pure energy, instead it was more like teleportation. Still, great surprise.