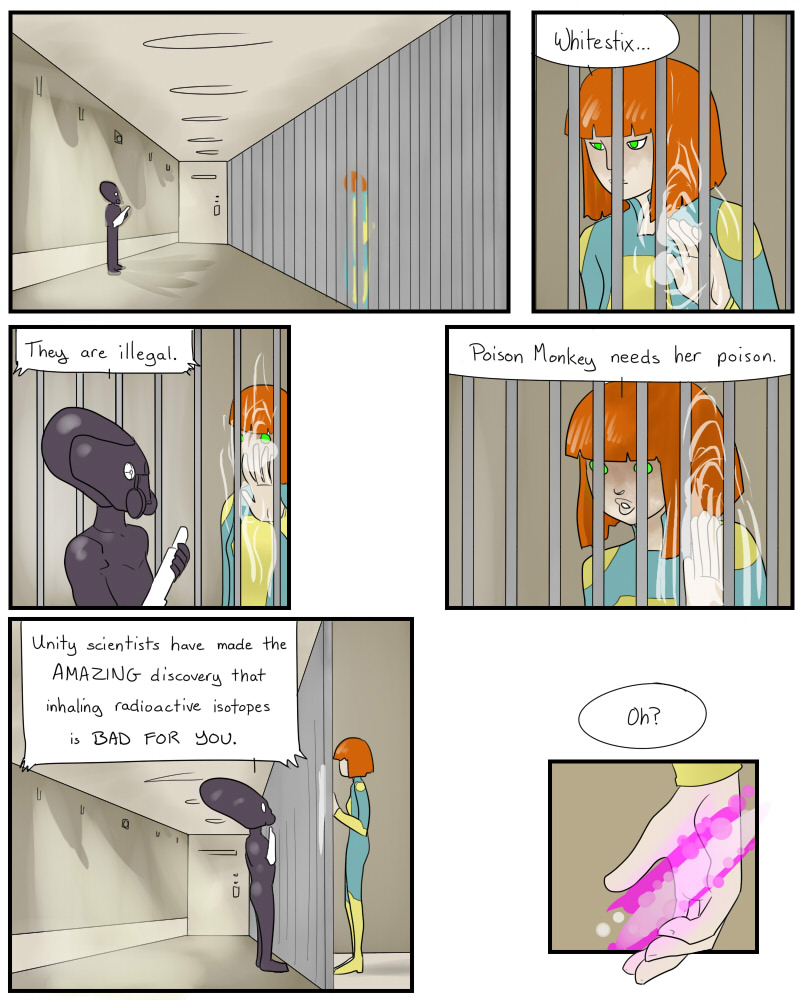 The truth comes out...

But is it sarcasm? Could be a true believer faithfully spouting the party line...
view 22nd Jul 2012, 9:48 PM
edit delete reply

At first glance, I thought she was doing a kind of jedi mind trick. But then I realized that white glow around her hand is likely some kind of force field from her cell.

The purple glow on the other hand, has me curious. It is too early to be certain just what form her powers take. But glow in her hand has rather defined edges (though still incomplete), which makes me think it is not merely an energy blast but perhaps her forming an object with her mind, like a knife/spike.
Sheela 22nd Jul 2012, 8:54 PM
edit delete reply

mmmMmmhm ... or an energy lance / staff.

Do you remember the sketches view posted before Comic 1? Not to mention the big clue on the Comic Profile page!
pensivedragon 22nd Jul 2012, 10:41 PM
edit delete reply

And a well deserved one too! Such discipline!

@view: How about Iridium? In a pack like this with the red changed for the color of her hair and the white being the color of her eyes.
That would make a good avatar, I think.
Undead H3r3tic 23rd Jul 2012, 2:19 AM
edit delete reply

AHA I SEE IT, her eyes have gone completely green, no whites, i guess they go like that when she's channeling her power. They've also gone round shaped...
cattservant 23rd Jul 2012, 12:43 PM
edit delete reply

The Hei are definitely based on MC Hammer. They are the MC Hammer species.
cattservant 24th Jul 2012, 12:07 AM
edit delete reply